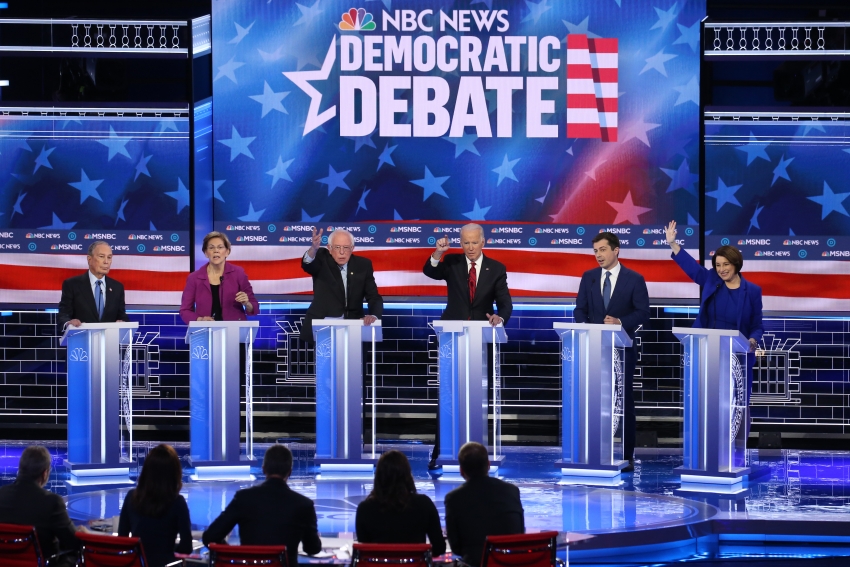 Superdelegates Were Designed To Stop a Candidate Like Bernie

Of course the establishment candidates approve of superdelegates—these unelected electors were created precisely to protect the party elite.

Those involved had deep doubts about the wisdom of opening up the nominating process to control by voters.

Many moments in Wednesday’s Democratic debate have already deservedly made headlines: Elizabeth Warren’s evisceration of Mike Bloomberg, the ongoing feud between Pete Buttigieg and Amy Klobuchar, and Bernie Sanders’ defense of socialism, to name a few. Perhaps the most important came at the very end.

Asked whether the candidate who ends the primary season having won the most delegates should also win the nomination, all the candidates bar Sanders—who now looks poised to win Nevada and the states beyond—demurred, insisting that the party follow the “rules” and “the process” set up.

Sanders was the sole outlier. “Well, the process includes 500 superdelegates on the second ballot,” he responded. “So I think that the will of the people should prevail, yes.” Sanders was referring to the current nominating rules, which stipulate that if no single candidate wins a majority of pledged delegates on the first ballot, the choice goes to a second ballot where all delegates are free to vote however they like—including those hundreds of party bigwigs known as the superdelegates.

What that means is that four years after inflaming progressive rage in 2016, and only two years after having their power weakened, superdelegates may well help decide another Democratic nomination. And if so, they will work exactly as designed: to allow the party establishment to kneecap an outsider candidate if the democratic process goes in a direction unfavorable to party elites.

As outlined in my 2016 In These Times investigation, superdelegates were created in 1982 by the Hunt Commission over frustration with the nominating reforms of 1970, which party leaders blamed for allowing the nomination of an unruly outsider like Jimmy Carter, and thus his 1980 drubbing at the hands of Ronald Reagan. As Elaine Kamarck, a Hunt Commission member and superdelegate, explained to In These Times in 2016, the party came off that loss looking to protect itself from future “outlier candidates.”

The transcripts of the commission’s seven-month-long discussions from July 1981 to February 1982, obtained from the National Archives, make painfully clear how sharply the creation of the superdelegates was tied to anxiety over the loss of influence for party elites. As Xandra Kayden, a member of the Center for Democratic Policy (now Center for National Policy), explained in August 1981, the advent of the primary system was “the principal reason we lost control of the nomination at the presidential level,” and Democratic officials and top-ranked party members had to “regain control of the nomination.”

“There are those who feel on the one hand that the fate of the Party has been what it has been because of the reforms” of those years, said Walter Fauntroy, a civil rights activist and the District of Columbia’s non-voting delegate to Congress. He added during the discussions that “had the party regulars and the party structure remained in control of nominations and in control of resources and the like, that our fate would have been much better.”

Those involved had deep doubts about the wisdom of opening up the nominating process to control by voters.

“Whether you have 100,000 or 10,000 or 10 million people participate has no bearing whatsoever on the quality of the outcome,” Minneapolis Mayor Don Fraser said at the time. This was after Fraser had opened the proceedings by joking that the party could simply decide to ignore the results of the primaries entirely, receiving “general laughter” from the room.

“We are the only democratic country in the world in which political parties pick their candidates in this manner,” Austin Ranney, an election expert and alum of the 1968 Hubert Humphrey campaign, complained at the time. “In every other democratic country in the world, you name it, this is the case, the candidate is picked by a relatively small group of party people in which the party’s elected public representatives, people who have faced the test of getting themselves elected to public office, play a prominent role.”

Central to this was the idea of party elites’ superior wisdom—the “certain political acumen, a certain political antenna” they brought to proceedings, as Connecticut State Sen. Dick Schneller put it at the time.

Ranney complained that the old system, one where party elites alone decided, meant there was a process of “peer review.” Picking a winning candidate through such means wasn’t guaranteed, he said, but the odds were much higher.

“There is nobody who can better tell a candidate how to win the state of California than a senator or a governor of California who has in fact won that state several times,” said Kamarck. It echoed the view of future vice presidential nominee Geraldine Ferraro, who told participants that party elites “can positively bring to the convention the views of the grassroots who are their constituents.”

At the heart of all this was the party’s trauma from the 1980 landslide loss, which officials viewed as a product of choosing unrepresentative candidates who catered only to the party’s base.

“We have fair reflection of those voters and caucus participants who vote or participate in the caucuses, but what about the majority of Democrats who vote in November but not in the primaries?” political scientist Thomas Mann asked at the time.

This kind of rhetoric was common for the era, perhaps best embodied by none other than former vice president and current Democratic contender Joe Biden. As outlined in my forthcoming political biography of Biden, the then-Delaware senator spent the 1980s touring with the corporate-backed Democratic Leadership Council (DLC) lecturing the Democratic Party to change.

Biden would later complain in 1993 about the “idiotic groups out there” like the “XYZ Group for American Values” and the “QSY Group to Save All the Women in the World.” He made repeatedly clear throughout the decade that these “interest groups” or “special interests” he and other Democrats were complaining about weren’t, as they used to be, big business and its lobbyists; they were the various minority and activist groups that formed the party’s base.

In 1978, as he pivoted sharply rightward for a re-election campaign held in the shadow of that year’s taxpayers rebellion, he blamed the growth of the federal budget on constituent interest groups’ reluctance to cut programs that specifically benefited them. Or as he told the NAACP convention more bluntly in 1986 when taking aim at Jesse Jackson’s campaign, “You can’t try to pit the Rainbow Coalition, blacks, Hispanics, poor whites, gays, against the middle class.”

This mindset was reflected in the Hunt Commission, whose namesake, North Carolina Gov. James Hunt—name-checked by Alvin From, then-head of the DLC, as a leader with an admirable record—suggested something similar in the commission’s opening. “There are some people in this party that maybe still feel a little left out, and maybe some of them are the sort of middle-income Americans,” he said. “I hope we can figure out some ways to get them more involved. I think we can do that.”

In other words, at the same time that Biden and other neoliberal Democrats were castigating the party for listening to “special interests”—meaning its diverse voting base—over what they viewed as mainstream Democratic voters, this mindset found its way into the Hunt Commission deliberations. Participants worried about the party becoming viewed as merely a collection of “interest groups,” and hoped that giving a bigger voice to party elites would ensure “middle income Americans” and other groups they viewed as alienated from the party thanks to its earlier rule changes were represented.

These rationales were put to the test in 1984. Contrary to the popular adage that superdelegates have never decided an election, by party members’ own admission at the time, superdelegates were integral in giving establishment-favorite candidate Walter Mondale an early and sustained edge over his closest rivals that year: the young, charismatic and neoliberal Gary Hart, and the progressive populist Jesse Jackson. The superdelegates then helped defeat or weaken several platform planks put forward by both, including reining in the use of nuclear weapons and military force in general and watering down an affirmative action program.

The election result didn’t bode well for the supposedly superior acumen of party elites: Mondale, who made cutting the deficit the center of his campaign, suffered an even worse defeat than Carter, winning only his home state of Minnesota and Washington, D.C. In some ways, it presaged the outcome of 2016, when superdelegates put their thumb on the scale for another establishment candidate who suffered another (albeit vastly narrower) electoral disaster at the hands of a radical right-wing Republican.