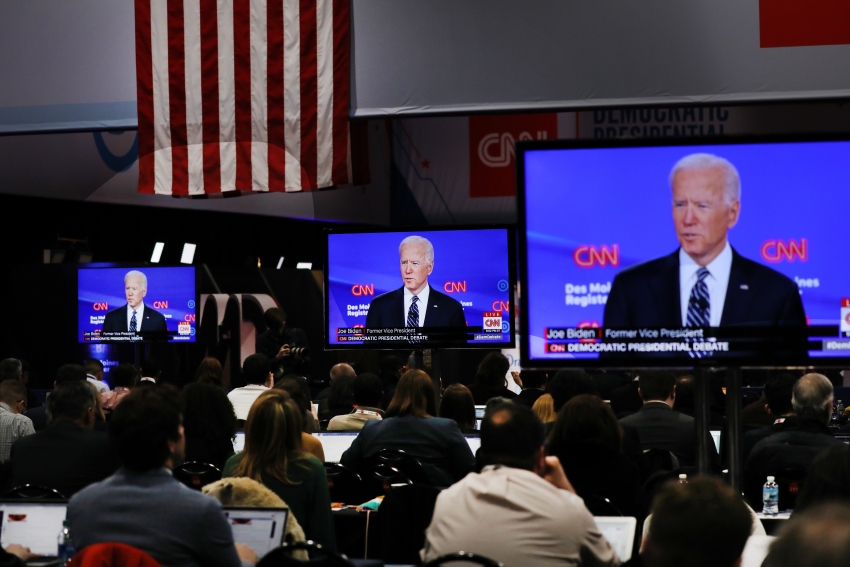 A tale of two media narratives.

Joe Biden’s ascent into frontrunner status is often portrayed as an organic consequence of big-time endorsements and an untapped desire for a more “centrist” and “electable” candidate. But a survey by In These Times finds that CNN has portrayed Bernie Sanders more negatively than Biden, suggesting that media slant itself may play a role in Biden’s rise.

In the 24 hours following his massive win in Nevada, Sanders received 3.26 times the proportion of negative CNN coverage than Biden did following the latter’s South Carolina win—despite the two wins being by similar margins. Sanders received more coverage after his win than Biden did after his: 419 mentions to Biden’s 249. But a larger share of Sanders’ mentions were negative, and fewer positive, than Biden’s. The above 3.26 figure was arrived at by comparing negative coverage as a proportion of total coverage for both candidates.

CNN is one of the most widely watched cable news networks on television, averaging about a million viewers during prime time. Given its down-the-middle reputation, CNN can be a useful proxy for broader media coverage. The 24-hour window following a primary is a critical time for setting a public narrative about which candidates are viable, have “momentum,” and seem presidential. Media coverage that drives up the negatives of a candidate can have a hand in harming their campaigns.

Sanders won a blowout victory in Nevada, garnering 46.8% of the vote in a multi-candidate field—putting him well ahead of Biden’s 20.2% support. Yet in the 24-hour period following his win, starting at midnight, CNN’s coverage of Sanders was slightly more negative than positive: He received 32 positive mentions, 33 negative mentions, and 354 neutral mentions from CNN guests or hosts. (For the purposes of this study, a “mention” refers to each time a candidate is discussed—but not to each time his or her name is mentioned. In These Times tended towards conservatism and only logged a mention as positive or negative if it was clearly either.)

Sanders’ negatives and positives were roughly equal (33 vs. 32) to each other, while Biden received more than three times more positive than negative mentions.

This tally is likely an undercount of overall pro-Biden slant in the current media landscape, as it does not include the avalanche of positive coverage Biden received for the endorsements from Amy Klobuchar, Pete Buttigieg and Beto O’Rourke that came the following day. CNN’s 5:00 a.m. Newsroom and its 11:00 a.m. episode of Connect the World were excluded from the count, as transcripts for these episodes the day after the South Carolina primary were missing from CNN’s website.

Twelve of the negative mentions Sanders received following his win in Nevada either accused the Vermont senator of being too far left to win, or denounced him as a socialist. On the February 23 episode of Newsroom, James Clyburn, the Democrats’ House Majority Whip, said, “On Super Tuesday, people are concerned about this whole self-proclaimed Democratic socialist. Socialism since I was a student in grade school was something that engendered a kind of vociferous reaction among people of a negative nature, and socialism is always kind of interesting.”

Such criticisms are repeatedly levied via major media outlets with no evidence, despite polling that shows Sanders could beat Trump in a general election and is trusted on issues deemed important to the Democratic base.

In that same 24-hour period, six negative mentions denigrated Sanders’ candidacy by tying him to Russia, or suggesting that the Russian government prefers him as a candidate (one of those critical mentions overlapped with the “too far left” criticisms). On the February 23 episode of State of the Union, former Reagan administration official Linda Chavez said, “But the problem is, the real winner last night I believe was Putin. I mean, we are going to have the most divisive election if Bernie is the nominee, we are going to see two very, very angry people representing two very different extremes of their parties, and I think that helps make America more chaotic, it makes us more divisive and, I think, the one that gets advantaged by that is Russia.”

Fourteen criticisms fell under the umbrella of nebulous “electability” knocks. One of those arguments was delivered by Biden himself, who was briefly featured on the 3:00 p.m. episode of Newsroom. The network’s White House correspondent Jeff Zeleny asked Biden, “Senator Sanders as the nominee be a McGovern-like mistake for this party?” Biden replied, “Well, that's for the voters to know. Now, look, I think it's going to go down between Senator Sanders and me for the nomination. As I said all along, it's not just, can you beat Donald Trump, can you bring along—can you keep a Democratic House of Representatives in the United States Congress? And can you bring along a Democratic Senate? Can you help people up and down the line? And I think I'm better prepared to do than Senator Sanders.”

Notably, Sanders was not interviewed by CNN in the aftermath of his Nevada win, nor was he invited to comment on Biden’s win in South Carolina.

In contrast to Sanders, criticisms of Biden following his South Carolina win were far more temperate—and less seathing and drawn-out—with all of them focusing on inadequacies or challenges in the campaign, competition from other “moderates,” and the need for him to be more inspirational. Some of the criticisms also contained encouragement. For example, on the 2:00 p.m., March 1 episode of Newsroom, CNN political correspondent Arlette Saenz said, “Clyburn is speaking out more about his endorsement of Joe Biden. He says Biden was—has his work cut out for him, and it may start with retooling his campaign, I'm quoting him on saying that.”

For the purposes of counting negative mentions, In These Times did not make qualitative distinctions. But it’s worth noting Linda Chavez saying Sanders’ win plays into Putin’s hands is far worse than Rosen insisting Biden could afford to be a bit more “inspirational.”

The morning show State of the Union also set aside at least nine minutes to an interview with Joe Biden by Jake Tapper, which aired at 9:00 a.m. the morning after the South Carolina primary. Between discussion of the U.S. deal with the Taliban and the Trump administration’s response to coronavirus, Biden hit out at Sanders on three occasions, arguing that he has greater credibility, criticizing Sanders’ track record in Congress, and knocking Sanders’ position that the winner of the plurality of delegates should be the DNC’s presidential nominee. “They are not looking for revolution, they [want] results. They want a return to decency. They want to be able to get things done,” Biden said. “And I have a record that is far superior on those two issues than Bernie’s.”

No corresponding interview with Sanders was aired in the 24 hours following his victory in Nevada.

This aligns with the analytics of television marketing monitors with no vested interest crying foul. Citing a survey from Critical Mention, a “real-time media monitoring platform,” advertising consultant Kevin Cate noted on Twitter that “between South Carolina polls closing Saturday & 7 PM ET on Super Tuesday, @JoeBiden earned $71,992,629 worth of almost entirely positive national media. Add local media in those markets and it easily tops $100 million worth of earned media in 72 hours.” Media monitors in journalism have another name for “earned media”: It’s called “puffery,” and its existence is not evidence of skill on the part of the Biden campaign, but rather a systemic failure on the part of media outlets, that should not be anointing a presidential frontrunner as “inevitable.”