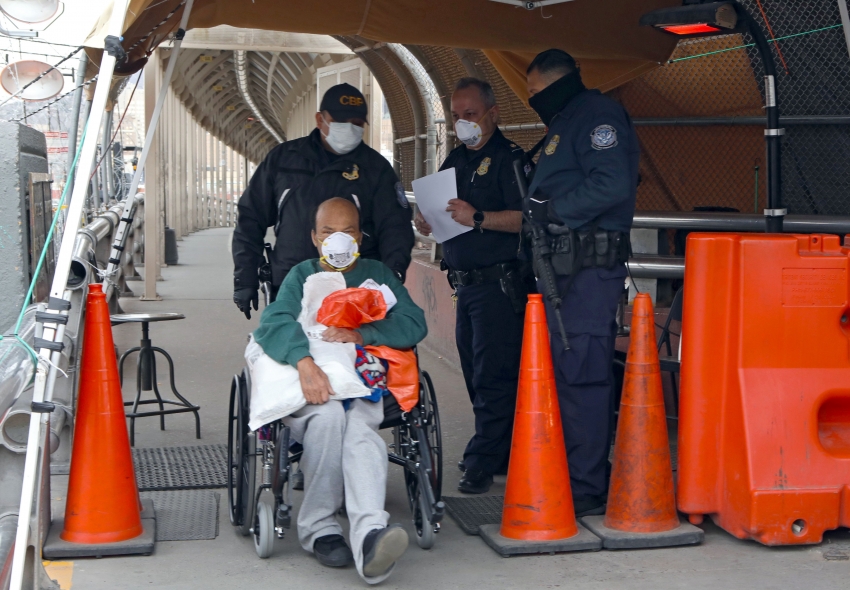 Under Trump, Undocumented Immigrants With COVID-19 Are Being Denied Care

For immigrants, the coronavirus crisis is becoming a nightmare.

SAN DIEGO—“It started with a fever and then a really high fever,” Daniella says. When Daniella developed symptoms—chills, difficulty breathing and six days of a 103-degree fever—she went to a drive-through test clinic at the University of California, San Diego. A 34-year-old Honduran refugee, she had been living in an LGBTQ+ safehouse since she was released from the Otay Mesa detention center seven months ago, on a $3,000 bond through a sponsor. (She is using her first name only, for fear of being deported.)

Daniella tested positive for COVID-19, just as she feared.

But when Daniella took her paperwork to the hospital, they refused to treat her. “I went to ask for help and they denied me because I am not a citizen,” Daniella says, noting she is undocumented and does not have health insurance. “They did not give me medications, they did not give me anything. I told them I was dying with a fever and was in so much pain because of this virus. It hurts because I am a human being before the eyes of God. It is horrible that they treat me like this and I do not have the right to do anything.”

Four other residents of the safe house later reported similar symptoms—including high fevers—but have not been tested.

Daniella is one of many immigrants across the world who are especially vulnerable during the coronavirus pandemic. On March 20, President Donald Trump announced the closure of the U.S.-Mexico border to all asylum seekers in the wake of COVID-19, saying the United States will deport anyone caught crossing.

Militarizing the southern border and making immigration more difficult had been on Trump’s agenda since at least his 2016 campaign, but extended legal battles have so far prevented some of his policies from taking effect. Now, the Trump administration is exploiting the pandemic to invoke the legal authority granted to the surgeon general, closing the border in the name of public health.

This border closure violates migrants’ rights as guaranteed by the UN Universal Declaration of Human Rights, and leaves thousands of asylum seekers in an even more perilous position as they become stranded in already overcrowded migrant camps at the border.

The Executive Office for Immigration Review (EOIR), a division of the Justice Department, announced March 23 that some immigration hearings would be postponed, including all hearings scheduled through April 10 for non-detained migrants in the United States. Hearings for those migrants awaiting hearings in Mexico under Migrant Protection Protocols (also known as the “remain in Mexico” policy) scheduled through May 1 are also delayed, and migrants will have to obtain new hearing dates and new government documents.

On March 13, Immigration and Customs Enforcement (ICE) suspended all social visitation in U.S. detention centers, but court dates for those currently held by ICE have not yet been postponed.

Out of the 69 immigration courts in the United States, 20 remain fully open, 38 are open for “filings and detained hearings only,” eight are open for filings only and five are fully closed. Union judges, immigration lawyers and even the Department of Homeland Security’s own attorneys continue to call for the complete shutdown of all of the courts.

Migrants’ access to legal counsel is also increasingly limited as the detention centers go on lockdown. ICE is mandating all attorneys “wear disposable vinyl gloves, N95 or surgical masks, and eye protection” before entering detention centers—but must procure those items for themselves. Given shrinking supplies, this new policy is a de facto limitation on lawyers’ ability to provide counsel to their clients. Meanwhile, despite the dire shortage of N95 masks at hospitals around the country, ICE has demanded 45,000 masks for its field offices.

“I have been affected tremendously due the COVID-19 pandemic,” Bey says, an asylum seeker from Jamaica living in Brooklyn, who is also using only their first name for fear of being deported. Bey had a court date scheduled for March 25 that could have allowed them to receive a work permit, but the hearing was canceled per the EOIR mandate. Now, Bey is indefinitely left with no legal means of generating income. Bey says this is “a huge setback. They aren’t taking in any more applications for work authorization, due to the pandemic. I'm uncertain not only of where my next meal is coming from, but also my rent and hygiene supplies.”

Undocumented people will not be included in the $2 trillion coronavirus stimulus package signed by President Trump, despite being more likely to have lost their jobs due to the virus and less likely to be able to afford treatment for it.

Not only are asylum seekers left in limbo, but migrants who have already been detained are left at risk. The border closure is seemingly meant to prevent the virus from coming into U.S. detention centers, but the virus is already there. On March 27, a federal judge ordered the release of 10 people detained by ICE because of COVID-19 concerns, noting that the jails where they were held have confirmed cases. Given the lack of testing and the difficulty to social distance in confined spaces, the number of cases is likely significantly higher than reported in these facilities and others.

Health experts advised against the border closure, warning it could be counterproductive. By immediately turning away asylum seekers, the closure will increase crowding at the already densely packed migrant camps at the border, likely accelerating the spread of the virus. As Margaret Harris, part of the World Health Organization’s coronavirus response team, told The Intercept on March 5, “You divert a lot of resources when you are focused on closing borders, rather than focusing on protecting your health workers, preparing your health systems and enhancing your disease surveillance.”

Ethicist and public health historian Amy Fairchild agrees. “That’s now an archaic notion that we’re going to protect ourselves at the border,” she says, “[but] these things play out at the community level. … We’re talking about [state and local] health departments.”

The Trump administration has also cited concerns for the safety of Customs and Border Protection (CPB) agents to justify the border closure. A March 20 statement from the White House reads, “[The border closure] will also protect the health of our country’s dedicated border agents and other law enforcement personnel, who are vital to the security of our Nation.” As of press time, however, the White House has announced no plans to halt arrests or deportations.

As of March 29, at least four unaccompanied migrant children have tested positive for COVID-19 at a detention facility in New York. Seven staff members and contractors working in facilities with detained migrant children have also tested positive for COVID-19 in New York and Texas. The New York Times reports that a federal judge has ruled both ICE and the Office of Refugee Resettlement must “provide an accounting of their efforts to release those [children] in custody” by April 6.

Amnesty International USA has called for the immediate release of all migrant children. Other organizers are calling for the release of all migrants held in ICE detention. “People will die if we do not take action,” Angelica Salas, executive director of the Coalition for Humane Immigrant Rights of Los Angeles, says in a March 23 interview with Democracy Now!. She continued, “Immigrants need to have the same access to all type of healthcare. … We have to shut down these detention centers.”

John Sandweg, former acting director of ICE during the Obama administration, confirmed in the same interview that “ICE has complete authority to release anyone from immigration detention.”

In the meantime, detainees are taking action.

On March 27, 150 detained migrants launched a hunger strike at the Northwest Detention Center in Tacoma, Washington. Democracy Now! quoted one striking detainee demanding “deportations to be postponed while the pandemic passes.” The action follows hunger strikes by nearly 100 detainees in Florida, 180 in Pennsylvania, 350 in Georgia and an unspecified number in New Jersey. Some of the hunger strikers are protesting the lack of protections taken to prevent the spread of the virus in these facilities, while others are calling for their immediate release.