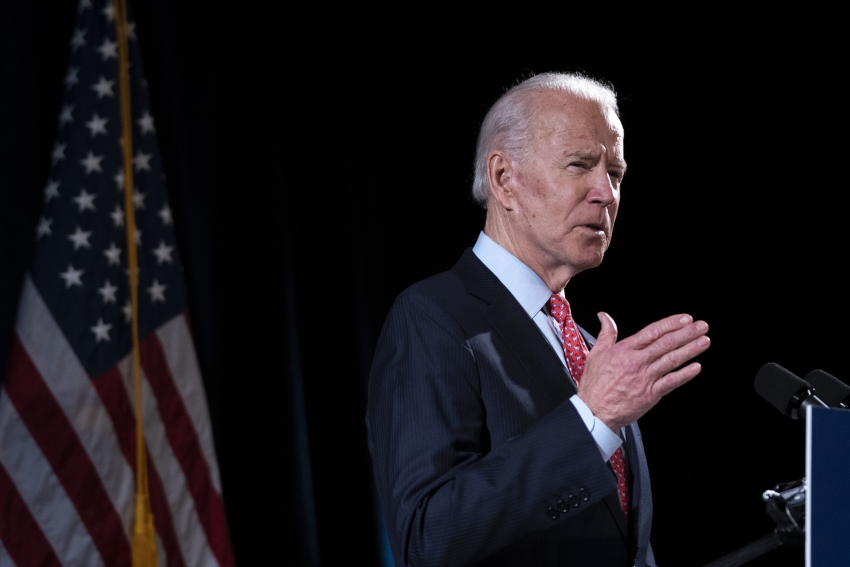 Biden may not embrace progressive demands, but his cabinet could. (Photo by Drew Angerer/Getty Images)

Want to Push Biden Left? Focus on These Appointments.

Appointments will have a major impact on whether a potential Biden administration delivers on progressive policies. Here’s what the Left should push for now.

Depending on their priorities, appointees may help or hurt working people—and pad or undercut corporate profits.

Last week, Sen. Bernie Sanders ended his presidential campaign but assured his supporters that “the struggle continues.” And he’s right. In the coming weeks and months, the struggle will continue in the streets (although perhaps in cars for the time being), at the ballot box, in workplaces, and in our efforts to care for each other in these bleak times.

Importantly, although perhaps less obviously, in the near term the U.S. Left must also work to influence the composition of a potential Joe Biden administration. With Biden the presumptive Democratic nominee, the people he empowers will help to shape—for better or for worse—the conditions under which the Left organizes for structural transformation. With that reality in mind, in the coming months, shutting out worst-case appointees and elevating best-case ones should—along with removing President Trump—be a top priority.

With Sanders out of the race, many progressives are being forced to think through how, or if, Biden can be made a more palatable candidate. If 2016 is any guide, there will be many efforts to move Biden leftwards on policy by, for example, pushing him to support Medicare for All or the Green New Deal.

Yet such efforts alone will not be enough to achieve the kind of bold change Sanders supporters are hoping to see. As president, Biden would have limited power to pass any legislation, centrist or otherwise. Even if it’s possible to push him to a “yes” on Medicare for All—a change that does not appear likely—it would be easy for him to let that commitment fall by the wayside in the face of congressional intransigence.

This is, of course, not to suggest the Left stop pushing on healthcare and other issues, or otherwise limit its ambitions. Those efforts are more likely to be successful, however, if we tailor our demands to match our targets’ actual powers.

So as groups fight ferociously for legislators to support policies like Medicare for All and the Green New Deal, they should consider that presidents have limited power over the legislative process. The executive is, instead, tasked with carrying out the laws that Congress has written. While that may sound mundane, it offers significant latitude in both the domestic and international arenas. Just look, for example, at what President Trump has been able to “accomplish”—and in the case of his Hurricane Maria and COVID-19 responses, ruin—without legislation.

Helping the president with this task are thousands of political appointees stationed across the federal government. These individuals interpret, administer and enforce the law. And they do so with considerable discretion, as the president and inner circle cannot possibly keep up with every key decision. Depending on their priorities, appointees may help or hurt working people—and pad or undercut corporate profits and wealthy people’s wallets.

It should come as no surprise that recent administrations have favored the latter set of interests. Presidents of both parties have tended to surround themselves with their friends and benefactors, often people with little to no understanding of working people’s daily struggles. Those figures, through legal interpretation and administration, have tended to make imperfect laws even worse in reality than they are on paper.

Consider, for example, the Obama administration’s disastrous handling of the housing crisis. Numerous government bodies, including the Departments of the Treasury, Housing and Urban Development, and Justice, plus the National Economic Council, were tasked with administering or overseeing various aspects of housing policy. The figures at the tops of those agencies—Timothy Geithner, Shaun Donovan, Eric Holder, and Larry Summers respectively—could have used this power to keep millions more people in their homes. Instead, they turned the other cheek or, in some cases, actively abetted Wall Street’s further takeover of our economy which resulted in millions facing foreclosure or eviction.

Of course, even the most public-minded appointees could not have fully addressed the consequences of the financial crisis, nor fixed all the problems that led to the meltdown in the first place. But better appointees could have improved people’s lives in important ways, first and foremost by helping keep them in their homes and out of bankruptcy.

Without outside pressure, Biden seems likely to repeat these same mistakes. His list of campaign fundraisers, advisers and donors is replete with corporate executives and individuals in the pharmaceutical, energy, private equity, real estate, and banking industries (among many others). If elevated to positions of power in the executive branch, these figures are sure to prioritize private profit over the public good. The Left cannot cede such critical terrain to these actors without a fight, even if such a victory represents only a small battle in the broader fight for fundamental change.

This isn’t merely a defensive play. Rather, progressives should think seriously about the good that the right people in the right positions could do—and which figures will be open and responsive to outside advocacy.

Think, for example, about what it would mean for the millions of people who currently struggle with the burden of student loan debt to be freed of it. The next Secretary of Education could make it happen but would have to be willing to weather significant resistance. American Federation of Teachers President Randi Weingarten endorsed Elizabeth Warren’s plan, which would cancel up to $50,000 of debt for 95% of student loan borrowers, and co could be a promising candidate when it comes to that issue.

And while it may pale in comparison to the benefits of Medicare for All, lowering prescription drug prices would be a meaningful improvement for countless Americans in the near term. A motivated Secretary of Health and Human Services who is committed to advancing the public interest, not growing corporate profits, could set about maximally seizing pharmaceutical patents to immediately lower prices. Someone like, say, Dr. Abdul El-Sayed, who ran for Michigan governor in 2018 on a left platform, or Rep. Pramila Jayapal (D-WA). It is hard to imagine, however, that top Biden adviser and former pharmaceutical lobbyist Steve Ricchetti would avail himself of these powers if similarly elevated to the position.

It’s not just domestically that Biden’s personnel picks will matter. Good appointees could help oppose the Blob’s incursions. A Defense Secretary Ro Khanna would likely prioritize an end to U.S. involvement in the war in Yemen and work to keep us out of other armed engagements. And although he may not be realistic pick for a Cabinet-level position, Matt Duss would make for a strong ally in an undersecretary position.

There are many other examples. The right person at the Department of Homeland Security might fight for a deportation moratorium (or be pushed to do so). A good CMS administrator could pave the way for almost a million homecare workers to join unions. All of these things would make a difference in millions of people’s lives in the very near term.

Groups on the Left will engage with the Biden campaign differently, but all should consider incorporating better personnel among their goals. For those groups that are considering an endorsement, making concrete personnel commitments a precondition for support may be a way to maximize positive impact (and minimize bad outcomes).

In a letter to Biden last week, for example, a number of youth-led progressive groups asked the now-nominee to commit to including staunch progressives on his presidential transition team and to excluding executives from Wall Street, the oil and gas industry, and others from his administration. Such conditions provide a clear metric by which groups can measure Biden’s efforts to win their support and that of the broader Left.

Even groups that have no intention of endorsing, however, have an important role to play in keeping detestable figures out of a potential Biden administration. Incoming administrations like to minimize distractions and hoard political capital, making controversial appointees unappealing regardless of ideology. That means that by merely drawing attention to the worst aspects of a nominee’s record, progressives can cause an incoming administration to listen.

Whatever the particular strategy, appointments are a worthwhile struggle for the Left in the near term. Biden may be the Democratic nominee, but the shape of his administration is still very much in flux. That means there is an opportunity now to expand the space in which we organize in the coming years. We shouldn’t pass it up.

Eleanor Eagan is a Research Assistant at the Revolving Door Project at the Center for Economic and Policy Research in Washington, DC.