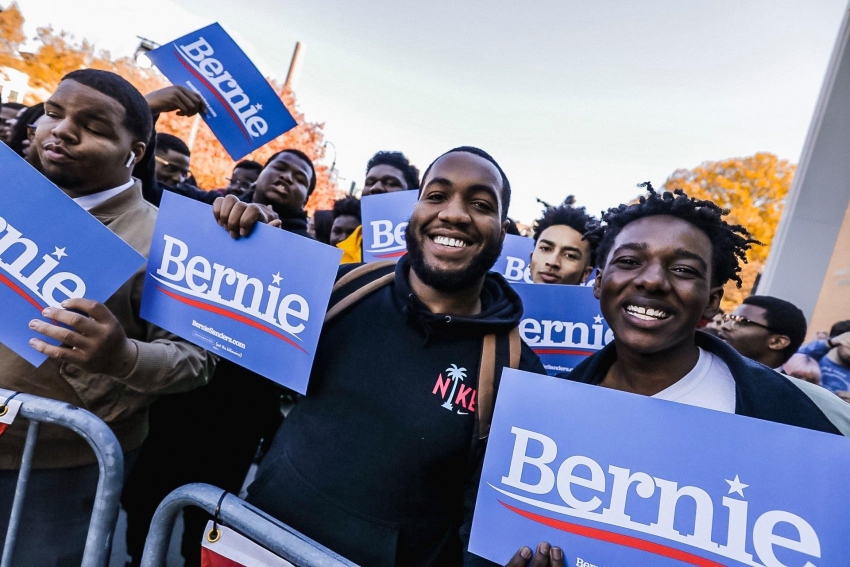 The Left must seize the opportunity to live our politics in public. (Photo via Facebook/Bernie Sanders)

Black Voters Are Ready. Are We?

Bernie lost with Black voters, but the Left will win if we commit to deep organizing work to earn their trust.

Most Black people—young or old—do not “know” the Black-led Left or the “Bernie, DSA Left,” at least not as a contemporary, consistent, powerful, organized, winning force in their lives. We must change that.

This is part of a roundtable on lessons from 2020 that the Left can use to win future presidential elections.

It’s been three and a half months since the South Carolina Democratic primary. As the story goes, it was there former Vice President Joe Biden and “Black America” drew a line in the sand and crashed the Bernie wave. What happened next confirmed that narrative in the minds of pundits and prognosticators: Joe Biden continued to win Black voters by large margins and, emboldened by the endorsements of former opponents and buttressed by Black support—as it was dubbed by a (very) few—swept Biden to the Democratic nomination, officially closing the book on the Vermont senator and his motley crew of Medicare for All-ers.

But here’s another story.

As a national surrogate for (and, briefly, senior advisor to) the Sanders campaign, I traveled over six and a half months of the primary to Florida, Iowa, South Carolina, North Carolina, Nevada, California, Mississippi, Alabama, Tennessee, Georgia and Washington, D.C. We sat and listened in barber shops, beauty salons, coffee shops, bookstores, sneaker shops, bars, community centers, community colleges, high schools, universities, homes and offices. What I witnessed was the same as what polling reflected: Black people—my people—support Medicare for All, marijuana legalization, ending the war on drugs, free college and trade schools, raises for all teachers and more—much of which agenda originated from Black radical ideas.

Knowing all this, it is admittedly hard for me to swallow that our people voted for Biden in such large numbers. Joe Biden is utterly bereft of vision and out of step with the moment, the last of a dying breed in a dying party, a bastion of a bygone age who required every bit of party machinery to get into gear and push a sputtering campaign across the finish line.

But many older Black folks didn’t believe we could accomplish the ambitious progressive platform that Sanders laid out. It felt like a gamble. And older Black people do not gamble or experiment at the ballot box.

And while there is growing Black-led Left organizing throughout the South, from Mississippi to the work of the Southern Movement Assemblies and Project South, Black communities don’t know us well enough.

Young Black people, however, overwhelmingly supported the Sanders platform and—to a lesser but growing extent—the more radical agenda of the Movement for Black Lives. But we have a ways to go to earn their excitement, commitment and membership in our ranks, let along their determination to vote in the face of rampant and targeted voter disenfranchisement.

Most Black people—young or old—do not “know” the Black-led Left or the “Bernie, DSA Left,” at least not as a contemporary, consistent, powerful, organized, winning force in their lives. We must change that.

If we on the Left are to grab hold of our destiny, we must wrestle with our organizing shortcomings. We just are not organizing as deeply and as widely as the moment and the future requires. The Left can win in 2022, 2024, and beyond only if we are willing to get off Twitter and launch innovative and vibrant campaigns and build alternative examples of the world we want tomorrow, today.

As we face this pandemic, for example, Black people and poor people (of all colors, including poor white people) are struggling; the Left must seize the opportunity to live our politics in public. In addition to our vital political demands, we must build national mutual aid programs to serve and protect the most vulnerable (while still making strategic demands on government). In times of need, people remember the people who were there—not as saviors, but as people who do what they say they will.

In rural counties along with the big cities, we must launch left candidates to vie for power and assemble alternative left groups to address specific needs with left policies that fit. The Left needs to show as models the places where we have won, the places where we have innovated new governance and economic frameworks. Through example, we can enact the left policies that become the practice for our class, race, gender and sexual politics. Here, we can translate our principles and our vision into a language easily understood by those struggling through neoliberal nightmares.

We must live in the hearts, experiences and minds of our people. Successful left movements animate the masses with art, music, dance and poetry. Without art and culture, our movement marches where it should sway, our speeches stultify where they should sing. Capital isolates and alienates. The Left is where the heart is.

Lastly, to win, we must protect and expand enfranchisement. Left organizations must invest in year-round voter registration, education and mobilization. Too long have we relied on a donor class and a Democratic establishment that abhor true democracy to invest in the democratic process.

Bernie Sanders proves the Left needs more than a charismatic presidential candidate (though it would help and be a whole lot of fun). We need a more diverse base of people, namely more Black people. That base needs a Left with answers, action, experimentation and strategy. A Left that is concerned to the material lives of rural and urban working people. A Left that has the courage to govern in the midst of contradiction, the strength to serve in crisis, the power to protect the ballot box, presence of mind to grapple with race, class and gender—and the creativity to build a movement that feels, loves and breathes.

The road before us is demanding, but it leads to victory. A luta continua.

Read other perspectives on lessons for the Left from 2020:

Zeeshan Aleem: To Win Elections, Should the Left Be Nicer on the Internet?

Astra Taylor: Bernie Sanders’ Exit Is an Indictment of Our Broken System​

Phillip Agnew is an organizer, artist, writer and strategist. He co-founded the Dream Defenders in 2012 and Smoke Signals Studio in 2015, and served as a national surrogate and senior advisor for the 2020 Bernie Sanders campaign.