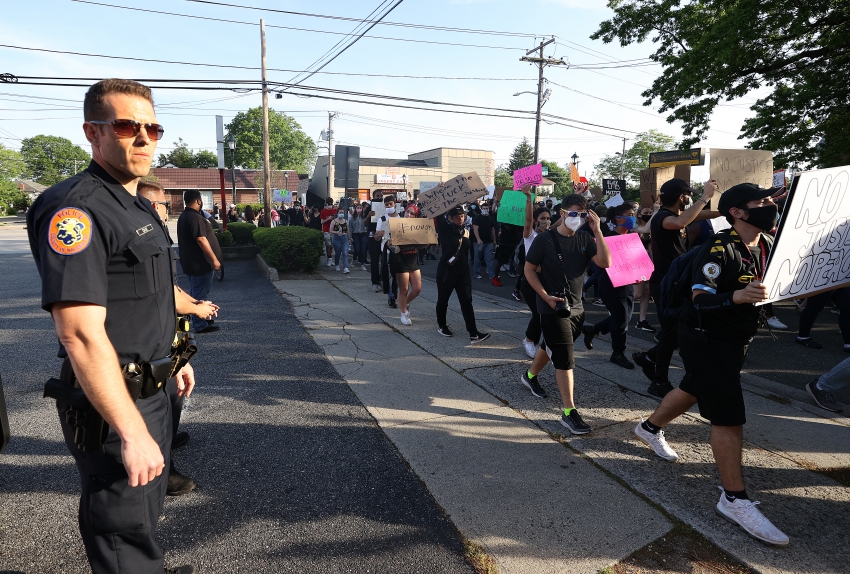 Some of the highest risks for Covid-19 spread have been imposed by police. (Photo by Al Bello/Getty Images)

While demonstrators have been blamed for potentially endangering the public, the real danger lies elsewhere.

What this debate illustrates is that we should have been thinking differently about risk all along.

Amid nationwide protests sparked by the killing of George Floyd by a police officer in Minneapolis, public health analysts—and the broader public—have debated the large public gatherings’ implications for the spread of Covid-19. According to most accounts, a high proportion of protesters have worn masks, and are gathering outside where transmission is significantly less likely than indoors. Yet they have also gathered in far larger groups than is currently recommended, and are frequently spaced less than six feet apart. Some onlookers are irked by the cognitive dissonance of making exceptions for protests given the urgency of social distancing. Others have countered that fighting systemic racism is a powerful public health measure in itself.

Racial and class disparities in Covid-19 deaths have clarified the shocking degree to which anti-Blackness shapes health outcomes, an issue deeply intertwined with how brutally Black communities are policed. Nonetheless, such arguments in favor of large protests do sit somewhat uncomfortably beside absolutist lockdown measures that have prevailed in many cities and states, some of which have gone so far as to shutter public parks while policing social distancing violations in the name of public health.

But what this debate illustrates is that we should have been thinking differently about risk all along. Coronavirus infection control has taken many forms, including measures such as school and business closures as well as the implementation of new social distancing protocols for services that remain open. It’s also entailed stringent rules governing individual behavior, reinforced by enforcement mechanisms ranging from policing to vitriolic shaming on social media. But there are two fundamental problems with this approach: it frames viral transmission as the result of selfish choices, and misunderstands who gets sick to begin with. Covid-19 is largely spread between people who had little chance to avoid exposure, who were pitted together in their own homes, by the state, or by their bosses.

While all of us should practice sensible, solidaristic risk reduction, more powerful actors—from police forces to politicians and corporations—bear structural responsibility for the extent of the outbreak.

The protests may well turn out to illustrate this very dynamic. While protesters attending the outdoor demonstrations have largely chosen to reduce the risk of transmission by wearing masks, distributing hand sanitizer and spreading out when possible, some of the highest risks were imposed by police: widespread reports depict officers corralling attendees in smaller areas and blocking accessible exits, packing protesters tightly together. Police officers themselves have frequently been observed without masks, and are themselves noted vectors for the coronavirus: at the height of the pandemic, nearly 20% of the New York Police Department was out sick, and police appear to have disproportionately high infection rates.

The use of tear gas by police causes coughing and eye-rubbing, both of which can facilitate the spread of the virus. Over 11,000 arrests nationwide have forced protesters into police custody where the risk of transmission is outlandishly high: people in detention are 2.5 times more likely to contract the virus, and 8 of the country’s 10 largest outbreaks have occurred in correctional facilities. One study found that people filtering in and out of Cook County Jail accounted for over 15% of all cases in the state of Illinois.

Outside of the protests, it’s even more obvious how little transmission has to do with individual behavior—the majority of Covid-19 transmissions occur in situations people didn’t choose to be in. Many infections are driven simply by where a patient lives: the most common site of transmission is within people’s homes, which is one of many reasons case numbers are higher in poorer, densely-packed households—often in neighborhoods that have been systematically starved of resources for decades. Rates are also incredibly high among homeless populations and within nursing homes. Essential workplaces with substandard protections and inadequate sick leave policies also put workers at risk, with major outbreaks emerging among workers in fields like meatpacking, sanitation and public transit. In some cases, employers are alleged to have contributed toward infection rates: several warehouse workers have sued Amazon over negligent safety measures pertaining to the virus.

In short, the vast majority of Covid-19 transmissions happen between people who were somehow compelled to spend long stretches of time with infected people: their family members or fellow inhabitants of nursing homes, homeless encampments or shelters; their fellow inmates; or other workers on the job. In many such cases, the conditions for transmission were laid by political decisions: the United States boasts more aggressive and expansive incarceration than any country on Earth, our lack of comprehensive and affordable housing policies have led to greater homelessness than peer countries, and our lack of union power has left workers less equipped to fight for safety protections and sick leave.

As such, widespread shaming on social media of individual behaviors like not wearing masks while running outdoors, or walking on a beach, have largely overemphasized the risk of transmission between passing strangers. While no activity is risk-free, individuals are perfectly capable of judging risk and modulating behavior accordingly, particularly if they have sensible guidance. But as epidemiological evidence about relative risks has mounted, public health messaging has been slow to evolve. Certain types of transmission appear to be quite rare: In one study of more than 7,300 cases in China, just one was connected to outdoor transmission. Touching infected surfaces likewise seems less dangerous than once feared.

These developments call for a reorientation of how we think about how risk is imposed on others, and how we navigate it for ourselves. As Harvard epidemiologist Julia Marcus told me, “People are making decisions every day about risk. And right now they're doing it without a complete picture of the relative risks of different activities that they may be engaging in. And now that we've realized this is going to go on for a really long time, we have to accept that most people can't sustain zero social contact.” If social distancing guidelines have thus far been analogous to abstinence-only education, Marcus argued, it’s time to move toward harm-reduction and teach people to make choices safely.

As the wave of protests shows, many Americans have determined that the moderate infection risk is exceeded by the risks imposed by the over-policing, systemic racism and poverty that stand at the center of the uprisings. The epidemiological evidence appears to be on their side.