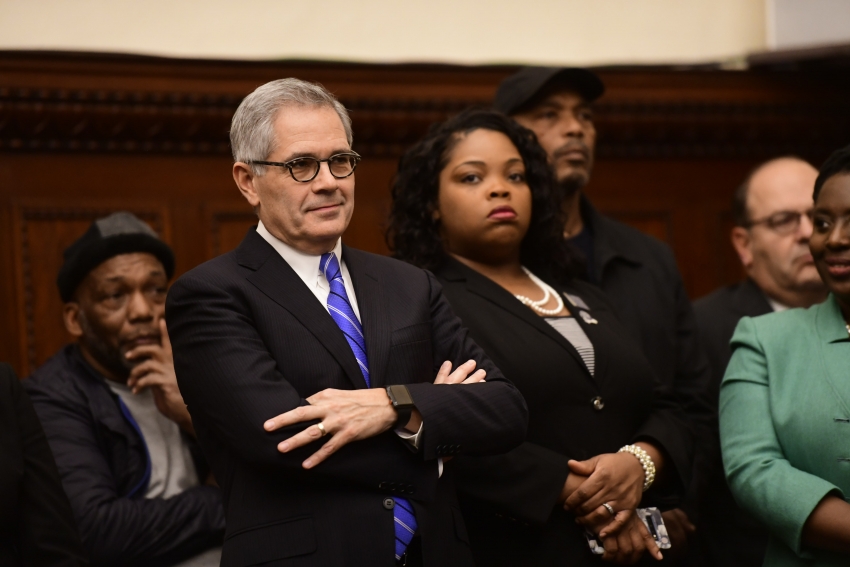 Philadelphia District Attorney Larry Krasner reacts while being mentioned by Danielle Outlaw at a press conference announcing her as the new Police Commissioner on December 30, 2019 in Philadelphia, Pennsylvania. (Photo by Mark Makela/Getty Images)

He sees a way out of our “drunken stumble” into fascism.

"I will charge people, whether they’re police or not, who engage in what is effectively kidnapping and brutal assault."

When unidentifiable federal agents began snatching protesters off the streets in Portland, people got nervous. When Donald Trump said earlier this week that he wanted to roll out the same strategy to Chicago, Philadelphia, New York and other cities, we got more nervous still. The elected officials in most of those cities urged the feds to stay away—and Philadelphia district attorney Larry Krasner took the extra step of issuing a statement threatening to prosecute them, saying, “Anyone, including federal law enforcement, who unlawfully assaults and kidnaps people will face criminal charges from my office.”

Such brash obstinacy was very much in character for Krasner, who spent his career as a left-wing defense lawyer before getting elected D.A. in 2017 as a progressive reformer on a platform of ending mass incarceration. (He sued the Philadelphia police department at least 75 times before being elected D.A.) Today, Krasner is one of the most outspoken of the crop of progressive district attorneys elected in major cities across the country in the past few years.

We spoke to him about what he might do about rogue federal agents descending on his city, and about our “drunken stumble” into fascism.

Hamilton Nolan: Have you heard anything officially about federal troops coming to Philly, other than Trump’s comments?

Nolan: Do you think it’s going to happen?

Krasner: As they say, sometimes there is no there there. Is something gonna happen? Probably. But what does that mean? He’s saber rattling about, he’s gonna send 150 federal law enforcement officers to Chicago. The police department in Chicago is 12,000 people. So let us understand what we’re talking about: He’s gonna take over a city with one percent of their everyday police population? So, what I do know is he will say absolutely anything, and he has absolutely no interest in accomplishing anything useful.

Nolan: But of course, there’s still the issue of what the federal agents might do if they get there. For those of us who aren’t lawyers, what’s your understanding of the legality of federal troops coming into cities and taking people off the streets, like they’ve done in Portland?

Krasner: It appears to me—and I don’t have all the facts—but it appears to me there was illegal conduct in Portland. There was certainly extremely troubling conduct. If you jump out of an unmarked van, and you’ve blacked out the plates, and you grab a civilian on the street, you better have probable cause. It’s not at all apparent they did, although obviously I don’t know every single thing that they knew at the time. So that looked illegal. When you fire a deadly, life-threating, “non-lethal” round into a protester and fracture his skull, that would appear to be illegal. So, if you come to town, police or not, and you start kidnapping and assaulting people and causing serious bodily injury, without legal justification, you get arrested and you get charged. And I will charge people, whether they’re police or not, who engage in what is effectively kidnapping and brutal assault.

Nolan: This is still theoretical in Philly, but not in Portland, and perhaps not in Chicago soon. In that scenario, when you think about charging a federal agent, what would happen, realistically? Would you expect to be immediately overruled somehow?

Krasner: The way it works is, the law does in fact apply to federal employees including the president of the United States. I know he likes to pretend it doesn’t, but it does. So they actually have to come to town and obey the law. If they do not obey the law then they can be arrested, and they can be charged locally. Under [certain] circumstances, after they are charged, down the road they can try to have the case heard in federal court. But it does not apply all the time, it only applies some of the time.

Nolan: The mayor put out a statement that was more or less in line with yours. But where does the Philadelphia police department stand on this?

Krasner: It’s important to understand that in Philly, the bargaining unit of the Fraternal Order of Police is a bunch of Trump-loving right-wing Republicans who are controlled by its retired membership. They recently threw a party for Mike Pence that was attended by the Proud Boys. Okay? That’s where they are. On the other hand, the police [department itself] is run by Danielle Outlaw, who is our recently appointed African-American police commissioner, who has made it pretty clear she is interested in reform, and that she is not gonna go in the same direction. We should differentiate between the voice of the past—the FOP does not control the behavior of the Philadelphia police department.

Nolan: Would you have any concerns about what police officers on the street would do in a scenario where city cops are being asked to enforce the law against federal agents? Or who they would listen to?

Krasner: Yes and no. No because, if we have the evidence, we don’t need the assistance or participation of an individual officer, and no because I believe the commissioner wants to evenhandedly enforce the law. Yes, to the extent that the culture still reflected within the rank and file to some extent is a very ant-Black Lives Matter, anti-protest, anti-free speech, pro-Trump culture. Yes, to the extent that there are some people in that large organization who aren’t necessarily going to want to enforce the law. Candidly, it’s an issue that we’ve already faced [in various incidents since the Black Lives Matter protests began]. But the bottom line is, I’m certainly hopeful that the police officers understand chain of command and know what their duty is and will protect civilians even against crimes committed by federal law enforcement.

Nolan: Have you had any conversations with your counterparts in other cities about how to approach this, since it sounds like multiple cities could be facing this issue soon?

Krasner: Actually a couple of my progressive D.A. buddies have texted today. Marilyn Mosby [of Baltimore] and Eric Gonzalez [of Brooklyn]. We’re all chatting.

Nolan: You touched on fascism in your statement on this issue—where do you think we are as a country in terms of the tiptoeing towards fascism?

Krasner: I’d call it more of a drunken stumble, actually. We’re dealing with this person who is just so out of control. He’s just so deranged. If it wasn’t so comical, I’d be more frightened. What do we say to this, other than come on, December 31?

Nolan: Is there anything reassuring that you can say to protesters and other people who are nervous about the way this whole thing is progressing?

Krasner: I can say December 31 is coming. Don’t forget to vote. I can say that I actually believe that everyone’s greatest concern is not that Trump’s gonna win the election, because he won’t. They’re all concerned that he will try not to leave. I do not believe that the United States military has a scrap of regard for this man. I think we’re gonna be okay.

This interview was lightly edited for length.