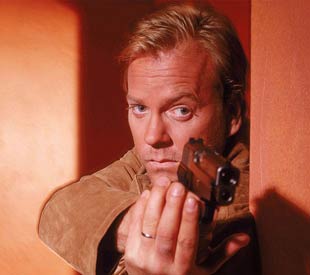 Jack Bauer and the Ethics of Urgency

The fifth season of “24,” the phenomenally successful Fox television series, premiered on January 15. Composed of 24 one-hour episodes, the show chronicles the workday of the fictitious L.A.-based Counter Terrorist Unit (CTU) as it desperately attempts to thwart a catastrophic terrorist attack. (In season four, they stopped a stolen nuclear weapon from exploding above a major U.S. city.) The “real-time” nature of the series confers a strong sense of urgency, emphasized by the ticking of a digital clock and accentuated with hand-held camera shots and split-screens showing the concurrent actions of various characters.

Even the commercial breaks contribute to this sense of urgency: Before a commercial, we see an on-screen digital clock signalling it is “7:46.” When the action resumes, the digital clock reads “7:51.” The length of the break in our, the spectators’, real time is exactly equivalent to the temporal gap in the on-screen narrative, as if the events nonetheless go on as we watch commercials. This makes it seem like the ongoing action is so pressing, spilling over into the real time of the spectator, that even commercial breaks cannot interupt it.

This brings up a crucial question: What does this all-pervasive sense of urgency mean ethically? The pressure of events is so overbearing, the stakes are so high, that they necessitate a suspension of ordinary ethical concerns. After all, displaying moral qualms when the lives of millions are at stake plays into the hands of the enemy.

CTU agents act in a shadowy space outside the law, doing things that “simply have to be done” in order to save society from the terrorist threat. This includes not only torturing terrorists when they are caught, but torturing CTU members or their closest relatives when they are suspected of terrorist links. In the fourth season, among those tortured were the secretary of defense’s son-in-law and his own son (both with the secretary’s full knowledge and support), as well as a female member of CTU, wrongly suspected of passing information to the terrorists. (After the torture, when new data confirms her innocence, she is asked to return to work. And since this is an emergency and every person is needed, she accepts!) The CTU agents not only treat terrorist suspects in this way–after all, they are dealing with the “ticking bomb” situation evoked by Alan Dershowitz to justify torture in his book, Why Terrorism Works–they also treat themselves as expendable, ready to lay down their colleagues’ or their own lives if this will help prevent the terrorist act.

Special Agent Jack Bauer, played by Kiefer Sutherland, embodies this attitude at its purest. Without qualms, he tortures others and allows his superiors to put his life on the line. At the end of the fourth season, he agrees to be turned over to the People’s Republic of China as a scapegoat for a CTU covert operation that killed a Chinese diplomat. Although he knows he will be tortured and imprisoned for life, he promises not to say anything that would hurt U.S. interests. The end of the fourth season leaves Jack in a paradigmatic situation: When he is informed by the ex-president of the United States, his close ally, that someone in the government ordered his death (delivering him to the wily Chinese torturers is considered too much of a security risk), his two closest friends in CTU organize his fake death. He then disappears into nowhere, anonymous, officially non-existing.

In the “war on terror,” it is not only the terrorists but the CTU agents who become what philosopher Giorgio Agamben calls homini sacer–those who can be killed with impunity since, in the eyes of the law, their lives no longer count. While the agents continue to act on behalf of a legal power, their acts are no longer covered and constrained by the law–they operate in an empty space within the domain of the law.

It is here that we encounter the series’ fundamental ideological lie: In spite of this thoroughly ruthless attitude of self-instrumentalization, the CTU agents, especially Jack, remain “warm human beings,” caught in the usual emotional dilemmas of “normal” people. They love their wives and children, they suffer jealousy–but at a moment’s notice they are ready to sacrifice their loved ones for their mission. They are something like the psychological equivalent of decaffeinated coffee, doing all the horrible things the situation necessitates, yet without paying the subjective price for it.

Consequently, “24” cannot be simply dismissed as a pop cultural justification for the problematic methods of the United States in its war on terror. More is at stake. Recall the lesson of Franics Ford Coppola’s Apocalypse Now: The figure of Kurtz is not a reminder of some barbaric past, but the necessary outcome of modern Western power. Kurtz was a perfect soldier–as such, through his over-identification with the military power system, he turned into the excess that the system had to eliminate in an operation that itself imitated the ruthlessness of Kurtz, what it was ostensibly fighting against.

This is the dilemma for those in power: How to obtain Kurtz without Kurtz’s pathology? How to get people to do the necessary dirty job without turning them into monsters? SS chief Heinrich Himmler faced the same dilemma. When confronted with the task of liquidating the Jews of Europe, Himmler adopted the heroic attitude of “Somebody has to do the dirty job, so let’s do it!” It is easy to do a noble thing for one’s country, up to sacrificing one’s life for it. It is much more difficult to commit a crime for one’s country.

In Eichmann in Jerusalem, Hannah Arendt provided a precise description of how the Nazi executioners endured the horrible acts they performed. Most of them were not simply evil; they were well aware that their actions brought humiliation, suffering and death to their victims. Their way out of this predicament was that, “instead of saying: What horrible things I did to people!, the murderers would be able to say: What horrible things I had to watch in the pursuance of my duties, how heavily the task weighed upon my shoulders!” In this way, they were able to turn around the logic of resisting temptation: Their “ethical” effort was directed toward the task of resisting the temptation not to murder, torture and humiliate. Thus, the very violation of spontaneous ethical instincts of pity and compassion was turned into the proof of ethical grandeur: Doing one’s duty meant assuming the heavy burden of inflicting pain on others.

There was a further “ethical problem” here for Himmler: How to make sure that the SS executioners who performed these terrible acts could remain human and retain their dignity? His answer was found in the Bhagavad-Gita, a special leather-bound edition of which he always kept in his pocket. There, Krishna tells Arjuna that he should carry out his acts with an inner distance and never get fully involved in them.

Therein also resides the lie of “24”: The presumption that it is not only possible to retain human dignity in accomplishing acts of terror, but that when an honest person accomplishes such acts as a heavy duty, this confers on him an additional tragic-ethic grandeur. But what if such a distance is possible? What if we do have people who commit terrible acts as part of their job, while, in private, they remain loving husbands, good parents and caring friends? As Arendt knew, far from redeeming them, the very fact that they are able to retain their normality while committing such acts is the ultimate confirmation of their moral catastrophe.

So what about the popular and seemingly convincing reply to all these worries and hair-splitting distinctions regarding torture: “What’s all the fuss about? The United States is just openly admitting, at least tacitly, not only what it has been doing all the time, but what all other states have been doing all the time. If anything, we have less hypocrisy now.” To this, one should retort with a simple counter-question: “If this is the only thing that the statements from the U.S. government mean, why, then, are they admitting this? Why don’t they just silently go on doing it, as they did before?”

What is inherent to human speech is the irreducible gap between the enunciated content and its act of enunciation: “You say this, but why are you telling me it openly now?” For example, we all know that a polite way to say that we found a colleague’s talk stupid and boring is to say, “That was very interesting.” If instead we openly told our colleague, “That was boring and stupid,” he would be fully justified to be surprised. The act of publicly reporting on something is never neutral–it affects the reported content itself.

The same goes for the recent open admission of torture: When we hear Dick Cheney make obscene statements about the necessity of torture, we should ask: “Why are you saying it publicly?” That is, the question we must raise is: What is there about this statement that made you enunciate it? Thus, what is truly problematic about “24” is not the message it conveys, but the fact that this message is so openly stated. It is a sad indication of the deep change in our ethical and political standards.