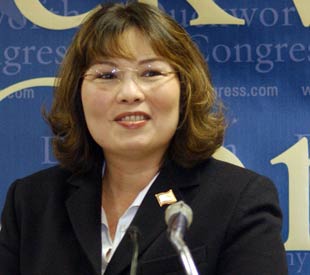 In an Illinois Primary, Threes a Crowd

The race for Henry Hyde’s seat raises the question of whether democrats should fight, keep the faith or grow the grassroots

With its steam tables pushed off to the side, the cafeteria of Jackson Middle School in Villa Park, Illinois, didn’t look like the setting for great political drama. But it was an early scene in what could be a crucial shift in power favoring the Democrats, both locally and nationally.

This moderately affluent DuPage County suburb west of Chicago, which makes up much of the 6th Congressional District of Illinois, is part of the traditional Republican power center in the state. Since 1975, it has been represented by Henry Hyde, a conservative well-known for his opposition to abortion.

Now Hyde is retiring, and on a Sunday afternoon in late January, three Democratic hopefuls made their case for support in the March primary to an audience of about 80 local party activists. With an open House seat, a hard-right Republican candidate, low ratings for Bush and an increasingly Democratic constituency, the district could help tip the balance of power in the House this fall.

This Democratic primary, however, is not just a contest among the three inexperienced but articulate and progressive individuals at the candidate forum. It also presents a choice among three competing strategies to revive the party’s prospects.

The candidate who ran against Hyde two years ago, Christine Cegelis, a 53-year-old information technology consultant, held the incumbent to his lowest winning margin (56–44) since he was first elected. Without significant help from the national party, she built up local party organizations and recruited volunteers. After her defeat, she continued her party-building–reflecting the grassroots revival strategy of the party’s national chairman, Howard Dean, who supported her in 2004. Cegelis also claims to bring business skills to the pursuit of progressive goals, and an “everywoman” persona to this well-educated, white-collar, tech-oriented district.

The second candidate to enter the race is Lindy Scott, a 54-year old professor at Wheaton College, one of the country’s premier evangelical Christian colleges. Scott, who describes himself as a progressive evangelical, wants to challenge the Republican claim on religious voters and the right’s definition of moral values. He defends his largely progressive views, such as withdrawal from Iraq, in the vernacular of both secular policy-making and religious faith. Having worked for many years in Mexico, he also hopes to mobilize the district’s growing Latino population–now nearly 12 percent of registered voters, thanks in part to a non-partisan voter registration drive two years ago.

In December, the final candidate entered–Tammy Duckworth, a 37-year-old helicopter pilot from the Iraq war. She had just left Walter Reed hospital, where she had been recovering from a rocket-propelled grenade blast that tore off all of one leg and half of the other and severely injured one arm. Duckworth, who thought the war was a mistake but felt that she had to be there with her unit, is a prime representative of the “fighting Dems” strategy championed by some bloggers and consultants.

More than 50 veterans are running for Congress as Democrats. Duckworth is one of the nine who are veterans of the recent Iraq and Afghanistan wars. Strategists hope these candidates bring national security credentials that will help them challenge the Republican strategy of running on war and terrorism, and painting detractors as cowards–an approach that Karl Rove made clear in January with his attack on Democrats as the party of “cut and run” in Iraq.

There were only two major differences at the forum among the candidates, who all take generally liberal positions, such as support for better funding of education at all levels, universal health care (ultimately involving single-payer health insurance), technology investment and more progressive taxes.

Scott, who belongs to Democrats for Life but supports Roe v. Wade, wants to “reframe” the abortion debate by empowering women with widespread child care and insurance coverage for both contraceptives and the costs of pregnancy. Both Duckworth and Cegelis identify themselves as pro-choice, but Duckworth in particular tries to encompass abortion within broader privacy rights.

And while all three harshly criticize Bush for going to war in Iraq and bungling its conduct, Scott and Cegelis call for a clear timetable for withdrawal of all troops. Duckworth advocates accelerated training of Iraqis, then withdrawing a unit of U.S. troops as each new Iraqi unit is ready.

The DCCC steps in

But beneath the broad policy agreements, there is smoldering conflict over how national party leaders have become involved in the race.

Despite Cegelis’ showing two years ago, skeptics argue that she should have done better, given the performance in the district by both John Kerry and Barack Obama. “It seemed an inept operation for what you’d need in an uphill battle in a Republican district,” veteran political strategist Don Rose says.

But she did inspire many local activists. “Her organization was very strong,” argues Doug Cole, chair of one of the township organizations within the DuPage County Democratic Party that is endorsing no one in the primary. “There’s a lot of lingering support because she was so strong in the precincts.” Cegelis’ record has also drawn support from some grassroots groups, such as Progressive Democrats of America–the group’s national deputy director is on leave to serve as her campaign chair–and Democracy For America, a spin-off of the 2004 Dean campaign.

All last year, however, Chicago Rep. Rahm Emanuel, chair of the Democratic Congressional Campaign Committee (DCCC), was searching for an alternative to Cegelis, especially a rich, self-financing candidate. The DCCC, which is formally independent of the Democratic National Committee, recruits and raises funds for Democratic House candidates.

Then, Illinois Sen. Dick Durbin met Duckworth in the hospital and was impressed with her, eventually urging her to run. Within a short time, Duckworth had endorsements from Illinois progressive luminaries like Obama and Rep. Jan Schakowsky and from the AFL-CIO, AFSCME (public employees), Service Employees, Teachers and other unions, as well as the statewide Citizen Action Coalition. In two weeks, she pulled to the front of the campaign in fundraising.

Duckworth is a “very compelling, smart, sincere and solid,” says AFSCME political director John Cameron. “Now she’s going to run with Durbin, Obama, Schakowsky and Emanuel support. They do one mailing, and they’ll win the primary.” Even some party activists who leaned to the other candidates are now tilting to Duckworth because they believe she has a better chance of winning in November.

But a lot of resentment remains. “We felt [Duckworth’s entry] was heavy-handed meddling by the DCCC and Rahm Emanuel to try to intervene in the grassroots politics of DuPage county,” Cole says. “Everything they do drips with centralized arrogance and is as autocratic as any ensemble of Republicans.” Christian Century Senior Contributing Editor Jim Wall, a former Democratic congressional candidate and state central committeeman from the area, is supporting Cegelis and thinks voters will resist both Scott’s direct religious appeal and Emanuel’s outside intervention.

Cegelis, who says she originally ran because she feared the prospects for the next generation were declining, accepts the competition but felt surprised and frustrated by party leaders’ intercession. “That was a real shocker to me,” she says.

Even many Duckworth supporters have regrets. “Frankly, I don’t think it was handled all that well,” says David Axelrod, Duckworth’s media consultant and a leading national Democratic strategist. “But we have serious, serious challenges in this country. The choices are as stark as any in my lifetime.”

Despite her inexperience, many people find Duckworth charismatic and engaging. Her story is compelling and readily brought to mind as she walks, with the help of a cane, on her new titanium legs.

Although some activists question the potency of Duckworth’s veteran status in an affluent district with few military ties, Duckworth told In These Times, “My experience will help voters vote on the issues that most concern them. They won’t fall for the GOP strategy that you aren’t a patriot if you don’t vote for invading Iraq … I believe in the Constitution and Bill of Rights. I was willing to defend it with my body.”

But the “fighting Dems” strategy didn’t work for Kerry, and poster boy Paul Hackett ultimately lost in his Ohio special Congressional election and has now withdrawn from the Ohio U.S. Senate primary under pressure from party leaders.

Still, the Republican candidate, state Sen. Peter Roskam, is vulnerable. A politician noted for his mean streak, he’s an extreme right-winger on many social issues and was mentored by indicted former House majority leader Tom DeLay. “It’s an exciting prospect,” says one Duckworth backer, “having a first-class candidate with progressive politics running against a right-wing toad.”

But first, Duckworth has to win the primary. Cegelis and Scott have significant strengths, both as individuals and in terms of the constituencies that may be mobilized by their strategies.

Whoever wins, Democrats in the district are hoping that they will be playing their parts in a grand drama that will ultimately end the monolithic Republican grip on power in Washington.