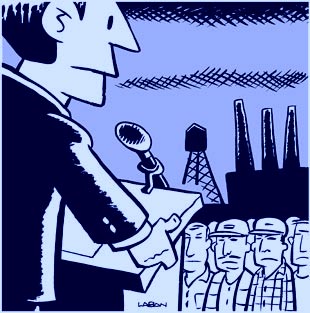 Free Trade could be key for Democrats in ‘08

Underneath the glut of stories about the now-failed proposal by a Dubai-owned company to buy major American ports was something that every 2008 Democratic presidential candidate would be well-advised to note. No, it wasn’t a new resurgence of “racism,” as many pundits in the corporate media claimed. After all, there was plenty of evidence showing that America’s national security apparatus had very concrete concerns about the deal. And no, it wasn’t merely that America wants better homeland security (although it is true–we do).

What the scandal showed was that Americans are sick and tired of “free” trade policies that prioritize corporate profits over all other economic and national security concerns. As workers’ wages stagnate, the U.S. trade deficit grows and more of our country’s assets are sold off to the highest foreign bidders, that concern is only going to become more prevalent in electoral politics.

This will be especially true in the early 2008 Democratic presidential primaries. In the three key states–Iowa, South Carolina and New Hampshire–trade is a major hot-button issue. A December 2003 Pew poll of these states showed that roughly 62 percent of voters said recent free trade agreements had either not helped or actually hurt their families. That sentiment has only gotten worse.

Iowa has long been a state where trade policy is integral to Democratic primary politics. It is, after all, the state that Rep. Dick Gephardt (D-Mo.) famously won in 1988 after making his opposition to free trade the major theme of his presidential campaign. That focus on trade has only gotten more intense as deals like NAFTA and China PNTR (Permanent Normal Trading Relations) have savaged wages, jobs and benefits in the heartland.

Take the 2004 Democratic primaries. As the caucus season heated up in October 2003, the Boston Globe noted just how angry many Hawkeye State voters were over U.S. free trade policies. “Across Iowa, trade is a bubbling political issue, asked about with regularity and great solemnity at campaign stops stretching from the Nebraska-to-Illinois border,” the paper wrote. “Agriculture is king in Iowa, but union workers at construction sites and farm equipment plants … account for one-third of the participants in the state’s Democratic caucuses.”

Four years later, the state is getting squeezed even further. In its report on the “State of Working Iowa,” the Iowa Policy Project notes that Iowa’s recent loss of thousands of good-paying jobs has been “driven partly by the recession, but also by the impact of global trade on high-wage manufacturing in Iowa, the upper Midwest, and the nation.” It notes that Iowans participating in retraining programs for workers displaced by free trade are making, on average, only 62 percent as much as the jobs they lost.

This suspicion about our current free trade policy may even be found in the agricultural sector. Traditionally, this is the sector that has most supported of free trade because agricultural products are one of the few export commodities with which our country still maintains a trade surplus. But Roger McEowen, an agricultural law and economics expert at Iowa State University, recently told the Waterloo Cedar-Falls Courier that politicians’ rhetoric about the Central American Free Trade Agreement (CAFTA) is inaccurately raising farmers’ expectations. “Since what the [low-wage, trade partner] countries buy is so trivial and with their buying power, the benefits will be slim to none,” McEowen said. “NAFTA hasn’t lifted up prices, so CAFTA certainly won’t do it.”

In 2004, Danielle Vinson, a political scientist at Furman University, told the San Francisco Chronicle, “South Carolina is a microcosm of what NAFTA and free trade have done around the country. … There’s no denying that the textile mills here have really suffered because of free trade.”

Vinson’s words are matched by the data. According to the Bureau of Labor Statistics, South Carolina has lost more than 71,000 manufacturing jobs since 2001. That a loss of more than one in five manufacturing jobs, with the textile and apparel industries being particularly hard hit from imports manufactured by cheap labor in China.

On trade, New Hampshire, the first primary state, mixes both blue collar and white collar concerns about corporate-written free trade deals. Like other New England states, its manufacturing base was decimated under NAFTA and China PNTR. Since 2001, the state has lost more than 25,000 manufacturing jobs, or one quarter of its manufacturing workforce.

The effects of those job losses have been brutal. A 2004 study by the nonpartisan Economic Policy Institute found that industries expanding in New Hampshire pay roughly 35 percent less than industries that are contracting. That is among the largest gaps of any state in America.

But trade policies really get interesting with New Hampshire’s large white-collar workforce. According to the American Electronics Association (AEA), the Granite State has among the highest percentage of high-tech workers in the country. These workers, once natural proponents of free trade deals that open up markets for export goods, are now learning that technological advances mean their jobs can be exported, too. As a recent AEA press release noted, “New Hampshire’s tech industry has weathered a heavy storm,” having lost 7 percent of its workforce in 2003 alone. That has left many New Hampshire workers fearful for their jobs and frightened of the kind of mass outsourcing that is being encouraged by America’s free trade policy.

As proof that free trade is growing as a political issue in New Hampshire, consider the bold move of Gov. John Lynch (D) in May of 2005. Five months into Lynch’s term, the Manchester Union Leader reported that the new governor wrote to the Bush administration and officially reversed “former Gov. Craig Benson’s (R) support for several recent or pending free trade agreements.” Considering Lynch’s previous career as a successful businessman, his move was particularly revealing on how trade now cuts across both partisan and demographic lines.

How the candidates stack up

Key to discerning how trade will play out in 2008 is an understanding of how the current crop of potential Democratic presidential candidates breaks into four distinct categories on the issue. The first category is the ardent free traders. These are people like Gov. Bill Richardson (D-N.M.), who shepherded NAFTA through the House when he was in Congress; and longtime and loudly outspoken free trader Sen. Evan Bayh (D-Ind.), a proud member of the Democratic Leadership Council, which has pushed every major free trade pact in the last decade.

Then there are the people who have tried to have it both ways but whose devotion to free trade orthodoxy has been well-documented. These are people like Sen. Hillary Clinton (D-N.Y.), who supported NAFTA, WTO and China PNTR; Sen. John Kerry (D-Mass.), who did the same; and Gov. Mark Warner (D-Va.), who also supported NAFTA and WTO (though did not support the China deal), and reiterated to the New York Times in March that he is committed to free trade.

The third category is candidates with mixed voting records on trade, but who have displayed a genuine interest in rejecting the free-trade-at-all-cost dogma. The only candidate in this category is former Sen. John Edwards (D-N.C.), who voted against some of the corporate-written trade deals that came down the pike during his Senate term, and who has made a class-based “Two Americas” message his signature theme.

And the final category is candidates who have opposed all of the trade deals, even when that opposition has been politically unpopular. This too is a one-candidate category, and that candidate is Sen. Russ Feingold (D-Wisc.)–a lawmaker who has lashed his public image to the issue by airing ads in his Wisconsin Senate races about his courageous stands against free trade pacts.

As the early presidential jostling has started to pick up, some candidates in the first two categories have made moves to address the growing anger over free trade. They seem to sense that trade–along with the Iraq War–could be an explosive wild card in 2008. If it is, the candidates in the first two categories are rightly worried, and are rightly trying to amend their records. Because if Edwards, Feingold or another as-yet-announced candidate makes an indictment of free trade central to their campaign, they will be tapping into exactly the kind of intense outrage that fuels successful insurgent candidacies.