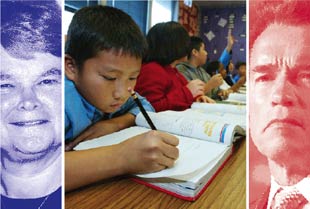 California State Sen. Sheila Kuehl knows the pitfalls of being young and gay firsthand. At 17, she was a television star, playing the role of Zelda Gilroy, in the weekly television sitcom, The Many Loves of Dobie Gillis. She was good enough that CBS filmed four episodes of a spin-off titled Zelda, only to be shelved when network executives began to suspect that their lead actress might be lesbian. She was also expelled from her sorority at UCLA after some of her sisters discovered a letter from her girlfriend.

Sheila took her indignation to Harvard Law School, then into a successful law career and finally to the state house. She was the first openly gay member of the California legislature and has championed issues affecting its citizens as an assemblywoman and now a senator. In February, she introduced a Senate bill (SB 1437), hoping to help to mitigate the alienation that gay teens face in public schools.

California law currently requires K-12 social science instruction to include a study of the role and contributions of both men and women, Black Americans, American Indians, Mexicans, Asians, Pacific Islanders, and other ethnic groups, with a particular emphasis on portraying the role of these groups in contemporary society. It prohibits textbook content, instruction or school-sponsored activities that reflect adversely on race or ethnicity, disability, nationality and religion. Simply put, SB 1437 adds sexual orientation and gender to that list, specifying that the information be presented in an age-appropriate manner. The bill passed the Senate and is headed to a vote in the Assembly sometime this summer.

The bill is drawing California Gov. Arnold Schwarzenegger into a debate that will pit his socially progressive views against the socially conservative dogma of his political base. Nationally, it poses the question of whether public school curriculum can catch up with popular culture.

According to David Holladay, executive director of the Los Angeles chapter of the nonprofit Gay, Lesbian and Straight Education Network (GLSEN), “the only way that gay and lesbian kids can see themselves in schoolbooks now is in the context of the AIDS epidemic or wearing pink triangles during the Holocaust.” A 2003 GLSEN survey found that 76.2 percent of youth reported that lesbian, gay, bisexual and transgender issues were rarely addressed or discussed in school. The survey further found that silence and biased messages promote negative stereotypes, which can lead to discrimination, harassment and violence. But when these issues are discussed, gay students report that they feel safer.

The study’s author, GLSEN’s Director of Education Scott Hirschfeld, asks, “What are students to infer, for example, from a book that defines HIV/AIDS as something that happened to Rock Hudson during the Reagan years?” (p. 886, American Odyssey: The United States in the 20th Century, 1999). Of 12,530 total pages of text, an aggregate of less than one page directly addresses LGBT issues, a shockingly low .007 percent of the total textbook material.

Elizabeth Sevilla, a high school English teacher in Compton, says, “If this bill passes, my job gets easier. Kids giggle when the word ‘gay’ is spoken in class, because it is taboo. This distracts from my teaching, because I have to stop and challenge the ignorance. Many of them use it in a negative way, meaning ‘stupid’–‘You’re so gay’–and this makes anyone who might be gay or have a gay family member or friend uncomfortable. But when the kids learn, for instance, that Langston Hughes, one of the great poets of the Harlem Renaissance was gay, they stop using the word as a weapon against one another.”

Indeed, it’s not just Langston Hughes. If SB 1437 becomes law, students could learn more about the role Bayard Rustin, a top lieutenant of Dr. Martin Luther King, Jr., played as principal organizer of the 1963 March on Washington. Many believe that he stayed behind the scenes to avoid political backlash from the revelation that he was gay. High school teachers could explain the 1969 Stonewall Riots in Greenwich Village, or the 1978 murder of San Francisco Supervisor Harvey Milk.

On May 25, two weeks after the Senate passed SB 1437 but before the Assembly considered it, Schwarzenegger’s office broke its rule of reserving comment on bills until they arrive for his signature. Director of Communications Adam Mendelsohn announced that the governor would veto the bill. The timing is noteworthy, with the announcement coming just days before the beginning of Gay Pride month. While the veto announcement may lessen the expectations for the legislation, it could also galvanize its supporters, leading increased pressure on Schwarzenegger.

Mona Passignano, states issues analyst of Focus on the Family, is heartened by the stance announced by the governor’s office, but not entirely satisfied. “I really want to hear it straight from him,” she says.

Meanwhile, the bill’s sponsor, Kuehl, is not accustomed to taking “no” for an answer. “He hasn’t made up his mind, I don’t care what some underling might have said,” she says. “When it gets to the floor, I expect to talk to the governor and I expect to get it through. … There’s nothing controversial about it … once people understand what it really does.”