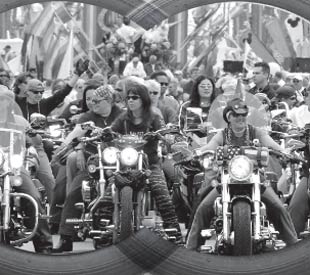 Dykes on Bikes leads off the Gay and Lesbian Pride Parade in Long Beach, California.

If there is anybody who really understands the word “dyke,” it is Joan Nestle, an author, editor and activist in the LGBT community for nearly half a century. “In the late ’50s,” she says, “when I was first exploring a public lesbian identity, the most dehumanizing taunt suspicious heterosexuals hurled at me was ‘bull dyke.’ It was filled with their conception of what a lesbian was like–an ugly, aggressive animal.” In those days, says Nestle, the New York City police had a special holding cell for women picked up in their raids on lesbian bars: the bull dyke pen.

Nestle has recalled those pre-Stonewall days in her writing, and now has recounted them for an unusual legal battle with the federal government.

Nestle and 22 other prominent scholars, linguists, community leaders and writers have provided voluminous evidence in a long-running fight between the United States Patent and Trademark Office and the San Francisco Women’s Motorcycle Club, more commonly known–and loved–as the Dykes on Bikes. The mostly-lesbian, heavily-leathered group has been leading the San Francisco Pride Parade down Market Street to the cheers of thousands since 1977.

In July 2003, the group applied for a federal trademark for the name “Dykes on Bikes” so that they could make sure it was used for non-profit, community-building activities and not for, say, some cheesy line of overpriced T-shirts and souvenirs.

In December 2005, nearly two and a half years after the application was submitted, the government finally said yes to the Dykes on Bikes, but only after the women’s lawyers submitted a mountain of evidence to rebut the Trademark Office’s repeated claims that the word “dyke,” and the term “Dykes on Bikes,” were offensive, disparaging, even vulgar to lesbians.

It was in the course of this fight with the government over the meaning of “dyke” that Dykes on Bikes lawyers hit upon the idea of collecting expert declarations from scholars, authors and activists, including Nestle.

In 1974, Nestle co-founded a unique cultural institution, the Lesbian Herstory Archives, the largest and oldest fount of information and primary source material about lesbian culture. Thus, as Nestle put it in her declaration in the Dykes on Bikes case, “I knew better than anyone what it meant when in the late ’70s, younger women proudly reclaimed the word ‘dyke.’ … Young women full of strength and hope … emptied the word of its bigotry and fear, replacing it with community and self-affirmation.”

The 23 declarations submitted to the Trademark Office played a key role in the reversal of the Dykes on Bikes’ legal fortune. They also provide an eloquent and fascinating paper trail about lesbians’ reclamation of a word that has been used as a weapon against them. As Vic Germany, president of the Dykes on Bikes club, put it, “I felt so strong after reading those declarations. I wish every dyke could read them.”

Another one of the declarants is lesbian cartoonist Alison Bechdel, who for nearly a quarter of a century has drawn and written a nationally syndicated comic strip called “Dykes To Watch Out For,” about a network of lesbian friends. Bechdel says she first heard the word “dyke” being used by other lesbians in 1980 at the annual Michigan Womyn’s Music Festival.

“I noticed that many women were wearing small buttons with the word ‘dyke’ printed on them,” she says. “This struck me as courageous, clever and humorous all at once, and I soon bought one for myself.”

Karla Jay, academic, activist and author of Out of the Closets: Voices of Gay Liberation, recalls the early ’70s, when telephone directories wouldn’t list the words “gay,” “lesbian,” or “homosexual.” At the time, she suggested to a group of lesbian mothers that they call themselves Dykes with Tykes. “The suggestion was met with cheers,” she says.

In her declaration, author Judy Grahn tells the Trademark Office that she proudly reclaimed “dyke” in some of her earliest work, including her 1966 satire of the psychoanalytic establishment, “The Psychoanalysis of Edward the Dyke.”

Psychologist Shara Sand’s declaration talks about her lesbian clients, who “often speak about the ‘dyke drama’ in their lives, refer to themselves as ‘strong dykes,’ working for the ‘dyke cause,’ and loving being a ‘diesel dyke.’”

“Without a doubt,” Buseck says, “the word ‘dyke’ … is definitely not derogatory.” Buseck goes on to scold the Trademark Office that “LGBT people face a number of serious problems, including unequal treatment in the workplace, hate violence, ineligibility to serve their country in the military and lack of access to the rights, responsibilities and financial benefits of civil marriage. In contrast, the proud use of the word ‘dyke’ by an organization highly regarded within the LGBT community is not an instance of discrimination.”

Finally, the declarations include one of the heaviest hitters of the word world, Jesse Sheidlower, editor-at-large of the Oxford English Dictionary, author of a scholarly book about the history of the word “fuck,” and editor of the entries for “dyke” and “bulldyke” in the Historical Dictionary of American Slang.

In his declaration, Sheidlower (who is white) draws a distinction between the use of the word “dyke” among lesbians, and the use of “nigger” among some African Americans–a term “still fraught” for the majority of African Americans. This raises a larger question of who gets to decide when a negative term of self-reference has reached a tipping point.

As In These Times went to press, the Dykes on Bikes are still waiting for their trademark, despite having prevailed on the law. The government’s decision to grant it has been challenged–as any trademark can be for a period of time–by a California man describing himself as “a Male Citizen of the United States.” In the papers he filed with the Trademark Office, he calls the word “dyke” a “symbol of hate” toward all men. The Dykes on Bikes’ lawyers accuse him of “a public and political assault on the dyke community,” and have asked the Trademark Office to dismiss his challenge.

Barbara Raab is a writer and non-practicing lawyer, with a particular interest in the intersection between the law and popular culture. She lives in New York City.