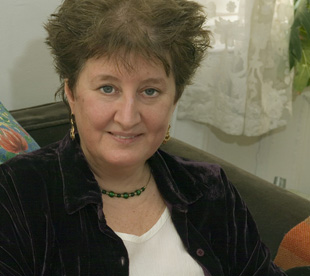 Virginity or Death!: A Conversation With Katha Pollitt

In September, Nation columnist Katha Pollitt stopped by the offices of In These Times for a public discussion of her latest book, Virginity or Death! And Other Social and Political Issues of Our Time.

While it’s become commonplace to describe journalism as a “rough draft of history,” this collection of Pollitt’s columns rises to the level of history itself. From the start of Bush’s first term through September 11 and the waxing and waning of the Iraq invasion in early ‘06, Pollitt offers a running chronicle of the issues of the day. She tackles each topic with humor and passion, always returning to the central role that women play in U.S. and international politics.

“The solution is obvious,” she writes in the book’s introduction. “Women must live modern lives organized around principles of self-reliance and self-development, while at the same time they must feel endlessly guilty and uneasy about the ways in which doing so inconveniences those around them. They have to be independent, and they have to blame themselves if they enjoy it.”

We discussed these and other conundrums during her visit.

So tell us about the title essay, “Virginity or Death.” Which is worse?

The title essay is about the wonderful discovery of the Human Papilloma Virus vaccine. If given to preteen girls, it will prevent most cases of HPV, which leads to about 70 percent of cervical cancer.

Cervical cancer is a very serious cancer and this is the first vaccine against any cancer; it’s really historic. So you would think everyone would say, “Oh this is just so wonderful.” But no. The Family Research Council was very upset, saying “This is gonna make young girls promiscuous.”

Just think about that for a minute: There is some young girl, and what’s keeping her from having sex now is thinking, “I could get cancer in thirty years if I have sex with my boyfriend now.”

I was so disturbed by this. It’s this whole values thing: Whenever they have a choice between mitigating or preventing some major damage that comes to people through sex, like using condoms for safe sex, or giving them actual sexual information in their classrooms, or now the HPV vaccine, they say, “No, no–ignorance and non-condoms, and you have to be a virgin.”

The good news is that in the case of the HPV vaccine, parents are really for this. Even very religious, conservative parents understand the medical issues that are involved. And so the Christian Right had to back off a little bit. And so now they say, “The vaccine’s OK, but parents should decide. It shouldn’t be mandatory.”

But this is a matter of public health. “Mandatory” actually means that is required for school, which means that the government will pay for it. This is an expensive vaccine that requires three visits. It’s just not the sort of thing that parents are going to be able to organize on their own. Also, you can already opt out of any vaccine legally, in every state. So this is a fig leaf; this is basically a re-statement of: “We don’t like this. We can’t quite say that you shouldn’t have it, but we’re not gonna help you get it.”

You spend a lot of time in your column tracking the different incursions on reproductive rights and choice. What do you think the biggest danger is right now to Roe v. Wade?

Well, that’s a very interesting question. A lot of people think that they’re never going to overturn Roe v. Wade. Well, if you were a shrewd Republican, you probably wouldn’t want to do that. But of course, sometimes they’re not shrewd, because they’ve got all of these religious nuts that they have to placate, so things can go a little too far.

But let’s say they don’t. They can still do so much by whittling away; hundreds of anti-choice bills come up in state legislatures and at the federal level. A lot of them don’t pass, and some of them do. But every year there’s less access to abortion than the year before. Already, there are two states with only one abortion clinic each.

So there’s that legislative aspect, but there’s also the issue of just how much trouble people who are involved with providing abortions have to be prepared to put up with. They live in communities in many parts of this country that are not friendly to what they do.

So, you could end up with a situation where if you live in New York, Chicago, California, or a few other big places, you can get an abortion. And in the abortion unfriendly places, which include some states you might not think of–like Michigan, one of the states with the most restrictions on abortion–you might find facing a lot of difficulty in getting an abortion. In fact, you already are.

Some feminists have said, “Fine, let them outlaw Roe v. Wade, then we’ll have a feminist movement again and then these young whippersnappers will see what people have fought for.”

This is a very common argument that you find on both sides of the political spectrum–losing is winning. Losing is losing. Losing is not winning; it’s almost never winning.

I remember when the 2000 election was in doubt, some dear friends, really smart people, saying, “Well, it might be better for Gore to lose, because then he can come back…” No, winning is better.

Now, the Republicans are saying this about the ‘06 elections. But, you know, would they be saying that if they thought they were going to win? Nooo…they’d be saying, “Oh its really great, we’re going to win again because everybody loves us.”

So I think it would be a terrible, terrible thing if Roe v. Wade was overturned because of the way it would go back to every state legislature. We’re never going to get to vote as a country; if we did, of course, pro-choice would win. But it goes state by state, and there are some very anti-choice places in this country. Young women don’t have a lot of political power–they’re not in the state legislatures. So I think it might wake up the feminist movement, but the feminist movement might not be able to win. So then you would have an awakened feminist movement and no reproductive rights. That’s really going back in time.

So do you think there’s anything else that might reawaken the feminist movement?