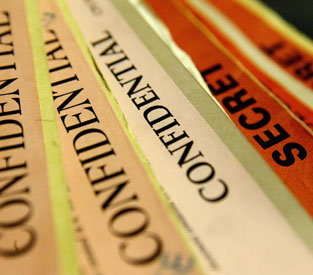 Two hundred and seventy million pages of FBI files were recently declassified. Why can’t the public access them?

At the stroke of midnight on December 31, hundreds of millions of pages of secret government documents–including 270 million pages of FBI files–were instantly declassified, promising to shed light on everything from the Cuban Missile Crisis to government surveillance of antiwar and civil rights activists in the ’60s and ’70s.

It was to be a “Cinderella moment,” said the New York Times, for researchers of the government’s secret history. But upon contacting the National Archives, researchers learned that declassification is not the same thing as release–none of the documents were publicly available for review.

The confusion over the documents’ status was understandable. The 2003 Executive Order that President Bush signed with great fanfare clearly stated that government documents more than 25 years old “shall be automatically declassified whether or not the records have been reviewed,” which many took to mean they would be available to the public. But it did not provide for the documents to be automatically made public.

In the words of the Justice Department, the policy of automatic declassification means that the material must be “reviewed for declassification, exemption, and/or referral to other government agencies.” Furthermore, it provides for nine areas of exemption and, beyond that, laws such as the Privacy Act can present numerous obstacles that ensure many documents will remain secret indefinitely.

Some of the exemptions outlined in Bush’s Executive Order appear reasonable enough–for example, if an agency head determines that declassification would “reveal information that would assist in the development or use of weapons of mass destruction.” But others, such as the exemption for information that would reveal “an intelligence source or method,” can be easily abused to keep embarrassing information secret. The FBI has often claimed this exemption for information obtained through wiretaps, which, of course, is one of their standard “sources and methods.”

When Lennon’s remaining 10 FBI files were finally released last month, Wiener notes that they did not reveal any sensitive intelligence that would have compromised an allied government. Instead, he says, they “contained only innocuous information about Lennon’s antiwar activities in London in 1971 that had always been publicly known.”

Catherine Nielsen, FOIA coordinator at the National Security Archive, a Washington-based nonprofit that seeks to educate the public on the secret history of U.S. foreign policy, says that it is “hard to say” how many of the exemptions are legitimate and how many are designed to maintain undue secrecy relating to official misconduct.

Furthermore, regardless of how many of the newly declassified documents ultimately remain secret, researchers may be frustrated to learn that even those that are deemed releasable might not be available for many years, due to the enormous amount of material that was declassified on January 1 and the huge backlog that exists at the National Archives.

Even before the recent batch, there were already approximately 400 million pages of documents that the National Archives has yet to release. Hampering their efforts is a chronic understaffing problem, which was only exacerbated by budget cuts last year.

The scarcity of funds certainly “serves as a constraint,” says Bill Leonard, director of Information Security Oversight Office at the National Archives. And he notes that it will be an ongoing issue each year.

Despite this backlog, Leonard says the new policy is generally a positive development, noting that “the specter of declassification” has already forced various agencies to release documents that otherwise would still be secret.

Nat Parry is a writer and activist based in Arlington, Virginia.