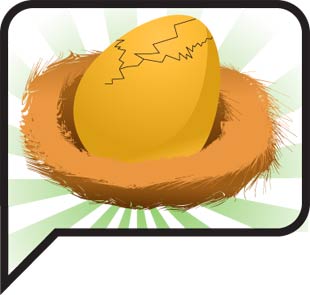 Libertarians are a strange lot. Their targets often seem reasonable; their solutions myopic and partial. So it goes with Christopher Buckley’s Boomsday, a sub-Swiftian sendup of the looming threat of an overwhelming federal deficit, set in the carnivorous confines of D.C.’s wonkscape.

Cassandra Devine is a heroine for our spin-crazy times–or actually, for five years from now, when the first wave of Baby Boomers will be eligible to retire, an event dubbed “Boomsday.” A “strategic communicator” for excessive executives, pesticide manufacturers and mink-farmers, by night, the twenty-something blogger imbibes Red Bulls and Ayn Rand in equal measure and sets her sights on the greed of those determined to make her “Generation Whatever”–Gen W–peers foot the bill for their golden years. Her modest proposal? Offer senior citizens a reprieve from estate taxes in return for their voluntary suicide at retirement–a publicity ploy that she terms a “meta-political device.”

Cassandra’s stunt, supposedly meant to prompt discussion of responsible government spending, spins out of control when it hits the whirling fan of media attention. Her cause is helped along by the ministrations of her P.R. flak boss, support from an ambitious senator, and the high-profile disapproval of an unctuous pro-life minister who heads up the Society for the Protection of Every Ribonucleic Molecule (SPERM). Cassandra’s excitable blog followers stage riots at gated communities, laud her call for a tax revolt, and cheer on her campaign for resource-hogging “wrinklies” to “voluntarily transition.” Elaborate hijinks ensue, and she ends up on the lam, a refashioned rebel with a cause, and a Blackberry.

Buckley–son of the Buckley of National Review fame–favors a reductively Freudian brand of character development. Cassandra’s fury stems from her Beemer-driving father’s decision to invest her college fund into his tanking dot-com. Both the self-indulgent liberal senator, Randolph K. Jepperson, and his nemesis, the rotund and foppish evangelist, Gideon Payne, seek power as a response to the disapproval of their overbearing mothers. Such devices allow Buckley to generate sympathy for even his most unlikable characters.

When not following psychological compulsions, Boomsday’s dramatis personae are driven by generational dictates. Born in 1952, Buckley slags his own generation as unrepentant hypocrites, hooked on perks and entitled to the point of narcissism. As Cassandra’s boss, Terry Tucker, explains, “Everyone sells out. Boomers just figured out how to make it an entire industry.” But this doesn’t let the Gen W crowd off the hook. Borrowing from the theories of psychologist Jean Twenge, author of Generation Me, Buckley sketches the rising cohort as cynical yet strangely easy to manipulate. Late in the novel, as Jepperson launches a run for president based on his appeal to the twenty-somethings, Cass advises him to adopt “Why Not?” as his campaign slogan. Soon after, bolstered by focus groups, she tells him the best way to court the youth vote is to tell the president to “shut the fuck up” in the midst of a campaign debate. Are readers supposed to swallow the idea that all it takes to woo the iPod crowd is a shrug and the staged authenticity of an expletive?

Still, while his characters’ motivations might be simplistic–as befits a writer convinced that each of us operates primarily from self-interest–Buckley can’t be faulted for lack of inventiveness. His baroque plotting largely manages to entertain while indicting the usual suspects: insatiable businessmen, corrupt priests, spineless politicians, amoral lobbyists and strong-arming pimps. A former speechwriter for George Bush Sr., and editor of Forbes FYI, Buckley is a whiz with snarky acronyms, and has an insider’s understanding of media’s levers and buttons.

Buckley’s publishers share his interest in the well-chosen publicity op. Boomsday is the first product of a boutique imprint at Hachette Book Group called Twelve. The conceit is that it will publish only one book a month, devoting extraordinary resources to promoting each title. “We strive to publish the singular book, by authors who have a unique perspective and compelling authority,” says Twelve’s mission statement, “Works that explain our culture; that illuminate, inspire, provoke, and entertain. We seek to establish communities of conversation surrounding our books.” And who will be speaking to whom to what end? A look at the first few authors tells the story: along with Buckley, there’s Christopher Hitchens holding forth on the poison that is religion, and John McCain on “great decisions and the extraordinary people who made them.” In other words, Twelve is home to the self-styled maverick, the blowhard contrarian beloved by the corporate media. Bloggers will have a field day.

Which brings us to the crux of the matter: Boomsday is not just another hard-working satire, struggling to keep up with the absurdity of the era. It’s a stunt within a stunt, a book about making a splash that itself is a cannonball into the deep end. You could even call it a “meta-political device,” designed to re-prime the pump for a debate over Social Security privatization–a gambit that failed spectacularly despite Bush Jr.’s best efforts. Seen from that perspective, it just becomes tiresome.

Buckley depends on the most dire prognostications for Social Security, which, according to moderate and progressive economists, is not “in crisis” at all. Of course, he is exaggerating for effect: his vision of a bankrupt administration is an expression of his own disappointment with conservatives’ current direction. In October, he expressed as much in a Washington Monthly article titled “Let’s Quit While We’re Behind”:

According to Buckley, then, the solution is some mixture of financial rectitude and parental responsibility: the government shouldn’t promise benefits it can’t afford to deliver, and the older generation should realize they’re depending on a smaller generation of youngsters to foot the bill for a bulge of retirees. Sounds nice, but it’s an outlook shaped (excuse the reductive character assessment) by Buckley’s up-market milieu.

Simply cutting federal spending won’t help the bulk of Americans, including many Boomers, who aren’t worried that they may have to pay estate taxes, or whining–like Cassandra–that they couldn’t afford to go to Yale. Instead, policy priorities need to be shifted to support those citizens who are caring for their own aging parents, struggling to pay for education, maxing out their credit cards to pay doctor’s bills, sitting on depreciating property and wondering about the stability of their jobs. They are the ones smacked around by the invisible hand, not lifted by it.

The publisher’s PR materials and Boomsday itself make references to Miami Herald columnist and comic novelist Carl Hiaasen as a model satirist–the kind of conversation-starter that they hope to emulate. But Hiaasen is not just a humorist, he’s a humanist. While his heroes and villains are caricatures, his protagonists are real people, dealing with issues like job loss and child support.

Like Buckley, Hiaassen might well target egotistical yuppies who expect government handouts without thought for the next generation. But he’d be equally hard on high-handed D.C. pundits who don’t feel like paying taxes and can’t see why they should be forced to.

Chris Buckley, I’m from Miami. Carl Hiaassen is a hero of mine. And you, sir, are no Carl Hiaasen.