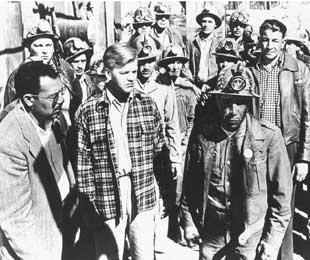 Salt of the Earth defied '50s black listings to chronicle a labor strike in a Mexican-American mining town.

A Crime to Fit the Punishment

Unless you attended its 10-week run at New York City’s Grand Theatre in 1954, you missed Salt of the Earth the first time around. In the decades since, director Herbert Biberman’s dramatic account of the real-life strike by the men and women of a Mexican-American mining community has taken on a mythic status among cultural feminists, interracial unionists and indie film buffs. In most accounts, the movie itself is the main character. A heroic one at that: Producer Paul Jarrico called it “our chance to really say something.” Its blacklisted creators, he boasted, had finally committed “a crime to fit the punishment.”

In On Strike and on Film, historian Ellen Baker explores Salt of the Earth, but shifts the focus from crimes to labors: industrial work, political work, cultural work. She begins by charting the decades-long battles of miners in Grant County, N.M., who dug copper, lead and zinc out of one of capitalism’s most unforgiving corners. In the rural Southwest, struggles over class and power were always about race, too. The mining company Empire Zinc presided over a system of employment that sorted “American” and “Mexican” employees into two tiers of worker rights and housed their families in two kinds of company housing.

For workers like José Martinez, who started at Empire Zinc as a track laborer in 1918 and retired in 1953 from the same job at the bottom of the pay scale, it might have seemed like things would never change. But as Baker shows, in the 1930s the ground began to move. The Depression shut down some of the mines for years at a stretch, devastating nearby communities. “Let’s start up again clean”–without union labor–muttered the vice president of another closed mine; when it reopened in 1937, even the town’s leftist barber found himself blacklisted. But the Depression also created grassroots demands for action. Community relief work brought the federal government into company towns where bosses had never before answered to anyone. And there was a new actor on the stage, with a mouthful of a name: the International Union of Mine, Mill and Smelter Workers. After America entered World War II, workers wielded new weapons: patriotic rhetoric, military demands for copper and zinc, and the relative strength that came with wartime labor shortages.

Meanwhile, in California the cultural workers who made up the Hollywood chapter of the Communist Party gathered for beachfront struggle sessions. They were, as Baker shows, the party’s elite: cultivated and coddled, absolved even of the dreary task of selling the Daily Worker from soapboxes. Although the industry’s structure and its executives’ politics foreclosed any truly transformative possibilities, leftist filmmakers slowly opened opportunities.

But if New Mexican copper miners and progressive filmmakers emerged from the war with a new sense of power, the Cold War, as Baker shows, brought quick retraction. Loyalty oath requirements led to lost jobs. House Un-American Activities Committee (HUAC) subpoenas appeared in Hollywood mailboxes. The 1947 Taft-Hartley Act announced that the government would not hear complaints from unions that couldn’t certify their members weren’t communists; three years later the CIO purged Mine-Mill, “honeycombed” with subversion. “Mine-Mill was a beleaguered union in 1950,” writes Baker, “cast outside the pale of the mainstream labor movement that it had helped build.” On top of it all, changes in global metal markets made mining jobs scarce throughout Grant County. When the men of Local 890 walked off the job on Oct. 17, 1950, they were striking not only for better wages, but against America’s all-out assault on their union.

It was an ugly strike, with racist threats, blacklists and fisticuffs. Mine-Mill was a fighting man’s union, and fought back hard. Not only with the men of its rank and file, but–as eviction notices appeared on the doors of company-owned housing and the grocery store closed its credit books–with the energy of whole families. Finally, on June 12, 1951, came an injunction forbidding striking miners from returning to the picket line the next day. At the union meeting hall that night, as miners’ wives served coffee, the men of Local 890 considered their equally unappealing options: Give up the strike or go to jail. Either way, the strike was lost.

From the audience, one of the women pointed out that the “striking miners” cited in the injunction didn’t include her. In Salt of the Earth’s account of the midnight union meeting, a lone woman stumbles upon the idea that women could take over the picket lines. In reality, as Baker shows, that idea had emerged from long planning sessions among Grant County’s activist women. And the vote carried only because members of Mine-Mill women’s auxiliaries could vote in union meetings–a right that came from decades of organizing and activism by labor feminists and democratic unionists. By 2 a.m., the women who labored in the shadow of Empire Zinc, if not on its payrolls, had stepped forward to take over the picket line. For six months, they stared down tear gas, mass arrests, indecent exposure and the hostility of some of their own husbands. But they won: In January 1952, company negotiators agreed to most of the workers’ demands.

The two strands of Baker’s story first came together in the summer of 1951, when Paul and Sylvia Jarrico heard of the strike and went to Grant County to walk the picket line; within a year, Michael Wilson was in town. Although Wilson started the script, the men and women of Local 890 finished it, insisting in the era of Ricky Ricardo that Latino/a characters would be favorably presented in the mass media. Biberman cast only five professional actors, among them a young Will Geer (better known to television viewers as the folksy Grandpa Walton) and the leftist Mexican actress Rosaria Revueltas, who called Salt of the Earth “the film I wanted to do my whole life.” Strike participants filled the ranks, most memorably Juan Chacón, who played the leading role of Ramón Quintero. His emotional richness and sly humor make him far and away the film’s best performer.

Filming began in January 1953 on a lightly fictionalized version of the Empire Zinc strike. Art soon imitated life in more disturbing ways as well. Congressmen denounced the film as “a weapon for Russia.” Police hounded cast and crew. On March 7, the crew left town with just enough film to string together a movie. On March 8, Local 890’s union hall burned in a mysterious fire.

By most of the standards that filmmakers use to measure the greatness of a film Salt of the Earth comes up short. In fact, watching 90 minutes of agitprop can almost make you understand why the Eastern Europeans who leapt the Berlin Wall in 1989 so eagerly snapped up Ernest Goes to Camp videos. In Baker’s hands, though, artistic missteps open windows into the cultural politics of the Cold War. If the editing seems choppy, that’s because Biberman and Jarrico had to submit the film to a dozen different developing houses under false titles, lest anticommunist developers destroy it; some of the editing they did themselves in a converted bathroom. An orchestra, told only that it was scoring a movie called Vaya Con Dios, accompanied a film its members never saw.

Likewise, critics have sneered at the frequent scenes in which Rosaria Revueltas appears in close-up silent shots that feel distant from the film’s real action. Well, in fact, she was: Revueltas was deported in February 1953, before filming was finished. Months later, Biberman shot a handful of makeups in Mexico. Blacklisted in two countries, she never made another film.

In Grant County, Salt of the Earth found only a single showing, at the Silver Sky-Vue drive-in. On Strike and on Film presents that fact not in a close-up but from the panoramic view, part of Baker’s rich history of work, politics and creativity that restores the Mexican-American men and women of Grant County to the center of the story. Years after the film, Biberman reflected, “We had thought of ourselves as ‘the blacklisted.’ And we were the veriest newcomers.”