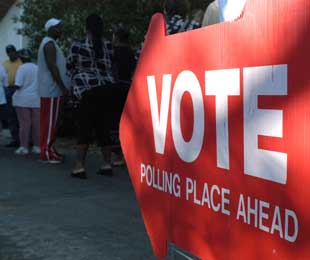 Voters lined up to cast their ballots at a polling place November 2, 2004 in St. Petersburg, Florida.

The senators grilling Alberto Gonzales should ask him about Arkansas’ new U.S. attorney–and his history of suppressing minority voters

With the sacking of eight honest prosecutors, the Bush administration has accelerated its politicization of the Justice Department.

The only thing worse than sacking an honest prosecutor is replacing one with a “criminal.” In this case, Timothy Griffin, who during the 2000 Bush-Cheney campaign worked as deputy research director for the Republican National Committee (RNC) conducting “oppo” (opposition) research. On Dec. 15, Bush named Griffin as the U.S. attorney for the Eastern District of Arkansas, replacing fired prosecutor Bud Cummins.

I don’t use the term “criminal” lightly. In August 2004, while he was research director for the RNC, he sent a series of confidential e-mails to Republican Party chieftains. But instead of using the party honchos’ e-mail addresses at GeorgeWBush.com, he sent these notes to GeorgeWBush.org. That domain belongs to a brilliant jokester, John Wooden, who, suspecting he had something important in hand, forwarded them to BBC Television Newsnight, where I worked at the time.

Griffin’s dozens of e-mails contained what he called “caging lists”–simple Excel spreadsheets with the names and addresses of voters.

Sounds innocent enough. But once the addresses were plotted on maps–70,000 names in Florida alone–it became clear that virtually every name was in a minority-majority voting precinct. And most of the lists were made up of itinerant, vulnerable voters: students, the homeless and, notably, soldiers sent overseas.

It was, according to Leon County, Fla., Elections Supervisor Ion Sancho, a “challenge” list–tens of thousands of voters who the Republicans intended to block from casting ballots. This was a variant of the scheme in 2000 when then-Florida Secretary of State Katherine Harris removed thousands of black citizens from voter rolls on the claim they were “felons”–when their only crime was Voting While Black, or, in other words, likely to vote Democratic. In the 2004 campaign, Griffin had a new trick: challenging voters on the grounds that they did not live at their registration address.

To “prove” these voters were committing fraud, the RNC sent first-class or registered letters to these voters, most of them black, to their address of registration, no forwarding allowed. Letters that came back as “undeliverable” were used as evidence to block the voter obtaining a ballot–or block an absentee voter from having their ballot counted.

BBC called the homes of several “fraudulent” voters. The wife of one, Randall Prausa, admitted her husband did not reside at her address in Jacksonville anymore. He was a naval airman serving overseas. Of course, it is not illegal for a serviceman to vote absentee from their home address, even if he’s black.

But it is quite illegal to target voters for challenge where race is a factor in the targeting. “That’s a crime,” Robert Kennedy Jr., an attorney expert in election law, told In These Times, “a violation of the Voting Rights Act of 1965.” And this crime was directed by the man who is now a U.S. attorney.

On Feb. 16, Griffin stated, in a rare moment of candor, that he does not want to face a confirmation grilling by a Democratic Congress. He’s theatrically written the president suggesting he be replaced at some unknown date in the future. This dramatic “I’m leaving” flourish is most cute. Under a provision snuck at the last minute into the reauthorization of the PATRIOT Act, Griffin can stay to the end of Bush’s term–through the 2008 election–which is clearly why Griffin was “important to Karl,” according to one e-mail released by the Justice Department. But Griffin has not offered his resignation, so his self-proclaimed designation as “temporary”–i.e., until the next president takes office–smells of just another Rovian ruse.

Back in 2004, Griffin wouldn’t answer questions about this vote-fixing “caging” scheme, but BBC did smoke out Bush campaign press flacks. When confronted with the lists on camera, one mumbled that these were lists of potential Bush donors. Really? Several pages of men registered at the Jacksonville State Street Rescue Mission? A lot of Bush-Cheney donors among the homeless?

The importance of Griffin

Details of how Griffin was selected have become public through thousands of e-mails released in March by the Justice Department. These e-mails show that Griffin’s appointment was clearly important to the White House. Kyle Sampson, Attorney General Alberto Gonzales’ chief of staff, wrote in a Dec. 19 e-mail, “ know that getting him appointed was important to Harriet [Miers], Karl [Rove], etc.”

Why was it so important to Karl Rove and then-White House Counsel Harriet Miers to make Griffin a U.S. attorney in Arkansas? A couple reasons come to mind. Maybe the Republicans were hoping to revive their investigations of presidential hopeful Hillary Clinton’s tenure as first lady of Arkansas. Or perhaps they wanted an operative experienced in suppressing Democratic turnout in what Rove had designated as one of the 11 battleground states in the 2008 election.

As Richard Fricker observed on ConsortiumNews.com: “With Democratic Sen. Mark Pryor expected to face a tough re-election fight, Arkansas could be a possible Republican senatorial pickup in 2008. Arkansas also has a large African-American population, and Griffin has had experience in ‘voter fraud’ investigations that have targeted the registrations of black voters.”

The Bush administration was well aware of Griffin’s role in the 2004 Florida election. In an Aug. 24 e-mail that the Justice Department’s Monica Goodling wrote to Sampson, she attached an article that noted Griffin’s nomination would face opposition in Congress because he was involved “in massive Republican projects in Florida and elsewhere by which Republicans challenged tens of thousand of absentee votes. Coincidentally, many of those challenged votes were in black precincts.” **

When it comes to felonious racial profiling, the Republican Party is a repeat offender, Kennedy says. In the ’80s, the party signed a consent decree with the Democratic National Committee to never again mount mass challenges against voters of color. But those were the days when the U.S. Justice Department thought its job was law enforcement.

That the Republicans are planning electoral mischief in 2008 is also borne out by the firings of John McKay, the U.S. attorney for Western Washington, and David Iglesias, the U.S. attorney for New Mexico, both of whom had refused GOP demands to bring charges of alleged voter fraud. (See “The Fraudulence of Voter Fraud,” page 28.)

Note the Republicans use of the term “voter fraud.” This is the crime of an individual voting illegally. It’s also a crime that almost never occurs.

But vote fraud, as opposed to voter fraud, is epidemic. Vote fraud includes racially targeted “caging lists,” wrongful registry purges, machine manipulations–in other words, games played by those who control the voting system, not the voters.

It is important, however, to Republican efforts to restrict the vote that hysteria be created about massive “voter fraud,” even though it doesn’t exist. And they have been successful in the vote restriction game. “Voter fraud” claims have led to a number of states imposing restrictive voter ID requirements. In 2004, according to the U.S. Elections Assistance Commission, “improper” ID was the number three reason for rejecting more than 1.1 million provisional ballots. Yet not one was proven to be a fraudulent voter, the crime the new ID requirements are supposed to prevent.

In New Mexico, the bulk of rejected voters were Hispanic, legal voters whose IDs were challenged. The worst case of this attack on voters occurred in “Little Texas,” the southwest corner of New Mexico controlled by Republican elections supervisors. Iglesias was fired after he refused to prosecute cases of so-called voter fraud.

Miers and Rove wanted to make an example of Iglesias and McKay, both of whom had refused to assist the political witch hunt for the nonexistent fraudulent voters.

As the Republicans polish off new tricks for the 2008 race, they will have the comfort of knowing the law will be enforced at the “discretion” of Griffin and the other Rove-bots now wearing the badge of U.S. attorney.

**CORRECTION This paragraph has been corrected. Originally it mistakenly attributed the quote to Monica Goodling herself, rather than to an article she had attached to her e-mail.