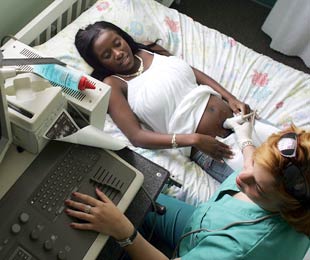 "Increasing the workforce of people who specialize in genetics and are able to get out to those rural areas is very, very important."

The mapping of the human genome, first completed in 2000, vastly accelerated research into the genetic causes of human disease. But national health policy has not kept up with the science, and consequently many Americans lack the information they need to make an informed decision about whether to carry a pregnancy to term.

According to reproductive health, genetic and disability rights experts, high costs and lack of government regulation have put comprehensive genetic services out of reach for millions of Americans.

Those services include not only blood tests, sonograms and amniocentesis to screen for genetic abnormalities in fetuses, but also genetic counseling that can help expectant parents choose whether to test for genetic disorders. Genetic counselors say pregnant women should understand that genetic tests sometimes have high rates of false positives before they agree to undergo them.

“What we have here is a situation where low income women are being denied the genetic services that non-low income women have access to,” says Loretta Ross, national coordinator of SisterSong, a coalition of reproductive justice organizations focusing on women of color.

Each year, 40 percent of pregnant women–1.6 million–depend on Medicaid for their prenatal care. According to a 1999 report from the Kaiser Family Foundation, a nonpartisan health policy research institution, Medicaid plans in 46 states and the District of Columbia cover some prenatal genetic services, usually second trimester screening for genetic variations such as Down syndrome, spina bifida and cystic fibrosis. At the time of the survey, the most recent to date, 36 states and the District of Columbia covered genetic counseling, but usually only after test results indicated increased risk for genetic abnormalities. Medicaid reimbursement rates for genetic services are low, and costs for families dependent on low-wage jobs or public assistance can be prohibitive. Genetic counselors laud a California program that guarantees second trimester genetic screening through a blood test for every pregnant woman in the state. But the test costs $162 and 27 percent of eligible Californians chose not to participate. And California, like most states, doesn’t provide access to genetic counseling unless a test result is abnormal. “The goal of a counseling session is to realize that if you do the test, it takes you down a certain path,” says Cathy Wicklund, president of the National Society of Genetic Counselors. “There are a lot of people who regret that they ever did that test in the first place because of the anxiety. What we advocate is education before you jump into something.”

The high cost and incomplete nature of Medicaid coverage for genetic services is partly due to a lack of regulation of genetic specialists. The American Board of Genetic Counselors has certified only 3,000 genetic counselors, who are first required to earn a master’s degree in genetic counseling. But because the federal government does not recognize genetic counselors as official medical “service providers,” in most states, they cannot bill Medicaid directly for their services.

“Sometimes genetic tests are only available in one specialized center outside your state, but your state Medicaid program only covers in-state procedures,” says Wicklund. “Increasing the workforce of people who specialize in genetics and are able to get out to those rural areas is very, very important. And language barriers are another issue. We need to increase the diversity within our own profession.”

Complicating matters, in January the American College of Obstetricians and Gynecologists (ACOG) recommended a new screening method that enables expectant parents to learn as early as the first trimester whether their fetus is at increased risk for Down syndrome. Previously, only pregnant women 35 and over were encouraged to undergo amniocentesis to diagnose Down syndrome in their fetuses. At age 40, the risk of a Down syndrome birth jumps to 1 in 100. However, 75 percent of babies with Down syndrome are born to women under 35.

This new first trimester risk assessment examines two blood samples followed by a sonogram–called a neuchal fold translucency–that looks for physiological signs indicating Down syndrome. The first-trimester procedure eliminates the small miscarriage risk associated with second trimester amniocentesis. But the blood test/sonogram method is not diagnostic; rather it tells parents how likely their baby is to be born with a genetic abnormality. A full 5 percent of fetuses that test positive for increased risk under the blood test/sonogram procedure are born without any disability. The result is given as a ratio; for example 1:4,000, meaning of 4,000 babies born who exhibit these test results, one will have Down syndrome. Eighty-five to 90 percent of women who receive a definitive prenatal diagnosis of Down syndrome choose to terminate their pregnancies. A 2000 study published in the journal Obstetrics & Gynecology suggests most women would prefer to risk an amniocentesis-related miscarriage than give birth to a baby with Down syndrome.

Disability rights advocates fear such statistics speak to the public’s lack of understanding of disability. A 2005 Senate bill cosponsored by Massachusetts Democrat Edward Kennedy (whose sister, Rosemary Kennedy, had Down Syndrome) and Kansas Republican Sam Brownback (who is staunchly anti-choice) sought to require that medical professionals provide expectant parents undergoing genetic screening with detailed information on genetic test failure rates and information meant to encourage raising a child with Down syndrome, despite the costs and stress. But the bill included little funding to improve the lives of people living with Down syndrome, and never came to a vote.

Nevertheless, disability rights activists remain committed to many of the bill’s tenets. While all people with Down syndrome are intellectually handicapped, their mental abilities vary greatly, and today many of the health problems associated with Down syndrome, such as heart disease and intestinal problems, can be treated with childhood surgery. These are facts pregnant women should know before undergoing genetic screening, says David Tolleson, executive director of the National Down Syndrome Congress, which defends the rights of people with Down syndrome. “Women are very often just given a blood test as part of their general prenatal testing. Doctors can be very general about what those tests are for. We believe that women should be fully informed as to what the tests are. We’re not saying you don’t need to take the test; we’re not commenting on that.”

Because the ACOG recommendations for first-trimester screening are so new, it is unknown how many, if any, state Medicaid plans are covering the procedure. Beginning in 2008, California is planning to offer it to all women for the same price as second trimester screening. But lack of insurance coverage, the scarcity of genetic counselors available to explain the complicated test, and the very small number of ultrasonographers certified to perform the neuchal fold analysis are sure to limit access to this early-intervention procedure.

For some disability rights activists, this is a good thing. And even abortion rights advocates worry about increasing access to genetic screening without first ensuring that low-income and non-white women aren’t pressured to end pregnancies because of concern they won’t have the resources to raise a disabled child. “Genetic screening takes place in a medical model of disability where the assumption is that the problem is the medical condition, not the social context within which people experience disability,” says Sujatha Jesudason of the Center for Genetics and Society, an organization with a skeptical view of reproductive genetic technologies. “Given that most medical institutions and systems are very non-supportive of disability, it becomes very hard to then argue for access and affordability for genetic screening, particularly considering how poor genetic counseling is in this country.”

The Center for Genetics and Society hopes to build bridges between feminists and the disability community by hosting a series of roundtable discussions emphasizing common ground. One recent discussion focused on pre-implantation genetic diagnosis of test-tube embryos, a largely unregulated field.

But advocates for increased access to reproductive technologies continue to view the issue through a pro-choice lens, worrying that only affluent women will have the choice of whether or not to raise a child with a genetic abnormality. Women with family histories of genetic disorders such as sickle cell anemia and cystic fibrosis, which are most common in specific ethnic and racial groups, need extra attention so they can plan not only pregnancies, but also prepare for the challenges of raising a disabled child. “We need to get Medicaid to do a better job of funding carrier testing and screening,” says Kirsten Moore, president and CEO of the Reproductive Health Technologies Project.

Genetic counselors can help expectant parents probe their family histories and decide whether to undergo genetic tests. But for such genetic counseling to be covered under Medicaid in most states, Congress would have to amend the Social Security Act to recognize genetic counselors as allied health care providers. A 2006 report from the Department of Health and Human Services recommended just that, and also suggested governmental certification of genetic specialists.

Expanding our health care system’s ability to offer professional, affordable and non-directive genetic counseling might be the best way to help expectant parents navigate the increasingly complex word of reproductive genetics. Each year, our ability to map a future person’s genetic makeup, appearance, sex and abilities grows exponentially. But new medical technologies lead to harder choices. “Technology gives you information and it may give you options,” says Moore. “But it never gives you answers.”