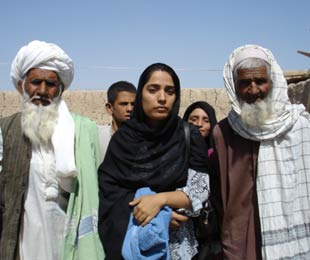 In the hard sunlight of the American desert, a renegade architect fits a gleaming slice of blue bottleglass into the mud wall of a fully sustainable home. Just hours later, a heftyman in mask and tights dumps bovine entrails on the steps of the city

All over the world, people are passionately exerting themselves in ways you might never have imagined. At the Silverdocs AFI/Discovery Channel Documentary Festival (Silver Spring, Md., June 12–17), five screens opened windows on to some of these stories.

Some of the more than 100 documentaries screened at the festival are already scheduled for theatrical release in the fall. A Walk Into the Sea: Danny Williams and the Warhol Factory (Esther Robinson, United States, 2007) tells the story of a forgotten member of Andy Warhol’s inner circle, young filmmaker Danny Williams, who disappeared one night in 1966. Directed by Williams’ niece, the film combines the enigmatic 16mm images he left behind with interviews with his contemporaries. A portrait emerges of a troubled and talented young man caught in creative scene riddled with rivalries, drug abuse, and tensions surrounding the unfair distribution of credit for shared ideas. In the Shadow of the Moon (David Sington, United Kingdom, 2006) chronicles the moon landings of 1969–72 through interviews with 10 of the surviving astronauts. These avuncular figures recall their in-flight epiphanies alongside arresting images from NASA’s archive, meticulously restored for the big screen.

Many more films, encompassing a swath of U.S.-based and international subjects, are currently in negotiation for theatrical release or broadcast as of this writing. The best presented broad themes including sustainable development, social activism and the democratic process, with unexpected twists supplied by charismatic and compelling characters.

“If you create your own electricity, heating and water systems, you create your own politics. Maybe that’s what they’re afraid of,” says architect Michael Reynolds, hero of Garbage Warrior (Oliver Hodge, United Kingdom, 2007), which had its U.S. premiere at Silverdocs. Reynolds transforms trash into sustainable houses that are as aesthetically captivating as they are utilitarian. These “earthships” collect rainwater with curvaceous roofs and filter it four times for reuse, grow food in lush greenhouses, and harness wind and solar energy to keep inhabitants off the grid. Garbage Warrior presents its visionary protagonist with beautiful cinematography, offbeat humor and a gripping narrative that follows Reynolds as he pursues innovation in sustainable design with an increasing sense of urgency.

Crisscrossing the country in the cabs of 18-wheelers, Big Rig (Doug Pray, United States 2007) seeks to demystify and redeem trucking in America. The film profiles 13 truckers of varying backgrounds who tell of near-death accidents, the troubles that led them to trucking and the empowering independence that the open road offers. The common thread, however, is their discontent with worsening working conditions and a general lack of respect for their labor, which (literally) drives the U.S. economy.

Meanwhile, south of the border, five “social luchadores” don the shiny masks, capes and tights of the Lucha Libre as they fight for social justice in Mexico City. Super Amigos (Arturo Pérez Torres, Mexico/Canada, 2007) profiles these real-life Super Friends. Only one has actually been a professional wrestler: Fray Tormenta (Friar Storm), a real priest who entered the sport to support the orphanage he runs. (The 2006 movie Nacho Libre was loosely based on his story.) Super Gay counsels hate crime victims and organizes the pride parade; Super Animal lobbies for animal rights; Ecologista Universal creates guerrilla performance art to raise environmental awareness; and Super Barrio has been helping poor families to resist eviction since the mid-1980s. The film playfully presents the origin of each character through animation, and frames their exploits with zany music, but doesn’t flinch from showing the gravity of the social ills that they are up against. The Super Amigos remain masked throughout the film and their anonymity reminds us of everyone’s capacity to take up these battles.

Chicago 10 (United States, 2007), a new film from Academy Award-nominated director and producer Brett Morgan, provides historical perspective on politics as (in the words of Abbie Hoffman) “theater and magic.” The film eschews the normal talking-head-style interviews, instead using archival footage and animation to tell the story of the 1968 riots at the Democratic National Convention in Chicago, and the subsequent conspiracy trial of eight protesters. Scripts for the animated sequences were culled directly from thousands of pages of trial transcripts, and voiced by actors including Nick Nolte, Hank Azaria and Liev Schreiber. The tone is alternately harrowing and humorous as the archive takes us from shocking images of police violence to stand-up performances in which Abbie Hoffman and Jerry Rubin reflect upon the absurdity of the trial process. Dark oddities also appear, such as a television report on a new kids’ game involving plastic clubs, observed on the streets of Chicago during the 1968 convention: “Cops and Demonstrators.” The soundtrack is contemporary and gritty, featuring groups like the Beastie Boys and Rage Against the Machine. This invocation of “the music of protest today,” according to Morgan, reflects a desire to make the story accessible to viewers who did not live through that time. Chicago 10 brings the story of the embattled anti-war movement to life, at a moment when selective historical memory often dismisses its vitality.

Back in the 21st century, on the other side of the world, Enemies of Happiness (Eva Mulvad, Denmark, 2006) chronicles the last few weeks of Malalai Joya’s campaign to become the first woman elected to parliament in Afghanistan. Joya has made many enemies with her candid denouncements of entrenched warlord power structures. Flanked by tight security, she receives visits from supporters who beseech her for help resolving local disputes, and passionately defends individual freedoms to groups of rural women, who will vote for the first time in this election. A sensitive portrait of a truly inspiring subject, Enemies of Happiness won a Special Jury Mention at Silverdocs.

Please Vote For Me (Weijun Chen, China, 2007), which follows three Chinese school children in their campaign to become class monitor, received the Sterling award for Best Feature. Although the stakes appear small, this hilarious and visually striking film actually offers a glimpse of greater social currents in China. The camera follows the candidates from impeccable classrooms to urban, middle-class homes where parents rather obsessively coach their only children on tactics from public speaking to buying votes. Ultimately, the film is a suggestive portrait in miniature of the complexity of the democratic process of the world’s largest Communist country. As part of the series “Why Democracy?” which includes 10 one-hour documentaries from around the world, Please Vote For Me will be broadcast worldwide in October (networks TBA at www.whydemocracy.net).

These films personalize huge, familiar questions with surprising, crystalline specifics. Only time will tell which of them will come soon to your local theater (or satellite dish, Netflix warehouse, or video-on-demand download site). Taken together, they animate a maze of stories unfolding simultaneously in disparate locales–a patchwork testament to the connections and disconnections between individuals across the world.