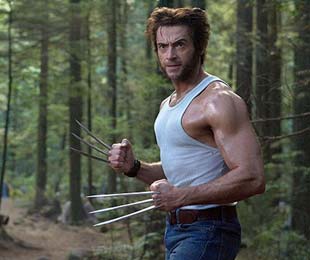 Members of the disabled community, like Wolverine, adapt to their environment.

Survival of the Adapted

The History of My Shoes and the Evolution of Darwin’s Theory takes the theory of evolution–“survival of the fittest,” a phrase that appeared only in a later printing of Charles Darwin’s classic text–and, in alternating chapters, juxtaposes the relationship between Darwin and fellow biologist Alfred Russel Wallace with Fries’ curiosity about his own adaptations to a world unprepared for his body and his means of motion

Kenny Fries’ The History of My Shoes and the Evolution of Darwin’s Theory (Carroll & Graf) is not so much about disability, as it is about adaptation–but adaptation in the same way that the X-Men’s mutations are adaptations.

Fries–a well-known poet and essayist who edited Staring Back, which many consider the foundational anthology on disability–was born without fibulae, with sharp anterior curves of the tibia and flexion contractures of the knees. He begins with a story about hiking in which he outdoes his able-bodied lover in a particularly harrowing stretch. But Fries never pretends to be heroic. The ease with which he manages up a rocky incline is the result of his much stronger upper body–an adaptation to compensate for his much weaker lower body–and his orthopedic shoes, which normally feel awkward but this time fit perfectly between the rungs of the ladder on the incline.

The book takes the theory of evolution–“survival of the fittest,” a phrase that appeared only in a later printing of Charles Darwin’s classic text–and, in alternating chapters, juxtaposes the relationship between Darwin and fellow biologist Alfred Russel Wallace with Fries’ curiosity about his own adaptations to a world unprepared for his body and his means of motion.

This may seem so niche, so particular, as to be inaccessible to most readers. But two things make Fries’ book remarkable: One is the bottom-line universality of human adaptation. The other is the gentle poetry of Fries’ narrative. The History of My Shoes is, technically, about one disabled man who adapts so well to his situation that he beats expectations, but it’s really also about how creatures of all sorts figure out ways to function in their environments.

Fries quotes disabled journalist John Hockenberry saying: “(Humanity’s specifications) are back on the drawing board, and the disabled have a serious advantage in this conversation.” To which Fries himself adds: “We live in a time when the disabled are on the cutting edge of the social trend of the broader use of assistive technology. Wireless technology and electronic gadgets are ubiquitous. The meaning of what it is to be human is wide open.” That’s exciting stuff, but it’s scary as well. What exactly does it mean to rethink humanity’s specifications? How can something as essential as humanity be up for re-interpretation at this late date?

And that’s where Fries excels in making us stretch our thinking. The subjectivity of normality, of disability, is effortlessly exposed when Fries explains that being born with a disability has rarely been an impediment in getting picked up at bars–gay bars–stereotypically viewed as temples to extreme beauty and hyper masculinity.

But it’s here where Fries later feels his vulnerability: “What made me disabled was not my bodily impairment but this man who decided to disable my body by choosing, for whatever reasons that were his own, not to have sex with me that night.” Fries writes on, “Isn’t it true that a dark-haired man who is rejected by a potential partner who is attracted only to blonds is, in that situation, disabled by another’s predilections and not by the color of his hair?”

The point seems self-serving but it’s almost uncannily Darwinian. Darwin, after all, was a proponent of context. That is, each and every creature could be understood only in relation to environment. In this way, what works is what’s “able,” what doesn’t is “disabled.” In other words, until that rejection at the gay bar, Fries was, in fact, no more disabled than, say, Brad Pitt in the same situation.

Fries also turns an interesting focus on Ian, his lover of many years. Ian is technically able-bodied, and certainly so in relation to Fries. But we discover Ian has a severe learning disability, a form of Attention Deficit Disorder that makes it tough for him to concentrate on tasks. But for Fries, Ian’s condition is something like those X-Men powers–in normative society, Ian is a kind of Omega level mutant, inadvertently breaking things, driving others crazy. But out in nature, Ian has an almost uncanny gift for detection, sort of like Wolverine himself. His quick reflexes allow him to shift focus and stay one step ahead in unforeseen ways. And Fries realizes: “In the jungle, Ian’s brain is firing on all cylinders, full of color, sound, light, and movement, just as it always is.”

The book is at its best when it switches back and forth between Fries and Darwin. There’s even a bit of conscious parallel between Fries and Ian’s relationship and Darwin and Wallace’s (although the latter did not have an erotic component). Fries’ shoes embody his disability and the world’s response to it. Darwin, who could not have found a kinder collaborator than Wallace, tries to articulate his idea about what were at first often seen as “imperfections” in nature. The back and forth is almost musical, so that when Fries, in the last few chapters, settles into his own life–and details one hiking trip in particular without Ian–the story takes a bit of, er, adapting to follow just him alone.

Throughout, Fries keeps a level head and a clear confidence, but also a modesty that makes his story open to anyone who wants to reconsider some old assumptions–not just about disability, but about who we are, and how we are, in our world.