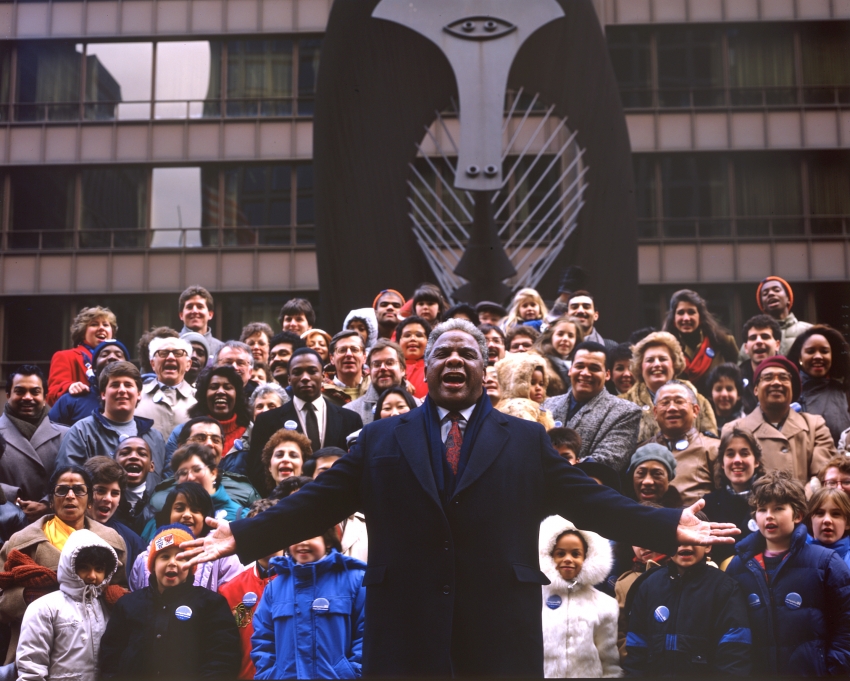 Although a haze of nostalgia clouds our recall of the Harold Washington years, few can disagree that the era was a time of hopeful activism.

When Harold Washington, Chicago's first black mayor, died on Nov. 25, 1987, many of us understood that his death marked the passing of a great man. But while we lamented the negative impact of his loss, few of us had any inkling of the vast political vacuum he would leave behind.

As time passes, the vacuum expands.

Back then, it seemed likely that Washington's powerful presence could propel the formation of progressive alliances across the country. However, as we grope around in the political darkness he once illuminated, it seems clear that his unique personality was a major reason for his success.

Washington was a rare composite. Washington was a peoples' intellectual and a seasoned political operator. He was an effective legislator, a progressive activist and a community leader with deep connections to grassroots organizations. (He was also a longtime supporter of this magazine.) His political success was never duplicated and the movement he inspired quickly dissipated following his death.

Washington's initial election occurred in 1983, when progressive forces were mired in the gloom of the Reagan administration. He found mayoral success using a formula that was part campaign and part crusade. But Washington was no political neophyte, full of naïve idealism. He had already served many years as a state legislator and a member of Congress, and was well versed in the nuts and bolts of pragmatic politics.

His candidacy forged political unity among Chicago's notoriously fractious black community and helped bring the city's feuding Latino groups (including Mexicans and Puerto Ricans) together. He ignited a bonfire of political support among the city's traditionally laidback Asian electorate. White progressives and reformers were attracted to his manifest independence from the Chicago machine and his promises of governmental transparency.

The forces of reform put into motion by his 1983 election and 1987 re-election inspired hope that a progressive prairie fire would spread across the nation. But no such luck.

However, the Washington phenomena did provide hope that black-led, multiracial coalitions were politically viable.

The Rev. Jesse Jackson explicitly used Washington's hybrid campaign/crusade as a template for his presidential runs in 1984 and 1988, during which time he amassed respectable vote totals, especially in 1988. But Jackson's Rainbow Coalition campaigns were the last hurrah and interest in such efforts later dwindled.

That's why many veterans of the Washington years were riveted by the political emergence of Sen. Barack Obama (D-Ill.). His trans-racial appeal and his progressive politics seemed to echo Washington's, and they triggered hopes for a revival of the progressive coalitions he inspired.

Obama initially seemed willing to utilize the Washington hybrid in his run for the presidency, but he since has adopted a more conventional campaign model. Illinois' junior senator may embody aspects of Washington's appeal, but he is not exploiting it.

Although a haze of nostalgia may cloud our recall of the Harold Washington years, few can disagree that that era was a time of hopeful activism. His mayoral tenure was a time of governmental transparency, political fairness and even racial reconciliation. The Washington years were a time when progressive coalitions of multiracial and multiethnic Chicagoans were celebrating their successes and mobilizing for more.

Of course, there also was a backlash of an anxious white electorate and zealous opposition. Many in that camp opposed Washington for racist reasons and others were ideological opponents of his progressive assaults on the encrusted Chicago machine. Those epic conflicts earned Chicago the moniker, “Beirut on the Lake,” drawing comparisons to the brutal civil war then raging in Lebanon's capital city. The rancor cooled following a special election that gave Washington a more balanced city council, and the mayor went to work engineering the fairest administration the city had ever seen.

It may be comforting to dream of those days and gloat about the triumphs and the promise of that era. But the Washington years happened because people were not dreaming or awash in nostalgia–they were awake and active.

Commemorations of the 20th anniversary of his death should act as a wake-up call to those of us who may have forgotten the promise ignited by this amazing intellectual of the people who became a political champion.