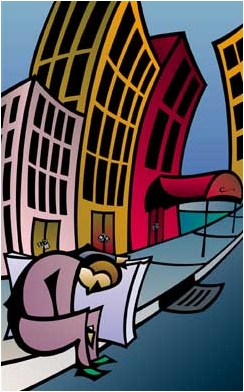 Market Up, Jobs Down

BY Dean Baker
Share TweetReddit0 EmailPrint
When second-quarter economic reports came out at the end of July, President Bush stepped forward to take the credit. “Because this administration has acted firmly, our economy is growing,” Bush said at a rare press conference.

Bush’s claims were accompanied by reports from the media and opinions from economists that suggested that the economy may finally have turned a corner. “Second-quarter growth, fewer jobless claims renew confidence,” headlined the Akron Beacon-Journal on August 1.

“Meanwhile, the latest weekly figures for initial claims for unemployment benefits may be signaling that conditions in the lackluster U.S. labor market are beginning to improve,” summarized the Washington Post, citing unidentified “analysts” in another August 1 story.

Unfortunately, for workers in the United States, the reality is nowhere near as positive as the celebration suggests. In fact, like the Bush tax cuts, the good news will mean little or nothing to workers who have lost their jobs or are worried about what comes next.

Even an unemployment rate that has risen to above 6 percent in the last few months, after averaging 4 percent for all of 2000, tells only a small part of the story. In the last two and a half years, there has been a qualitative change in the labor market. The country has gone from a time in which jobs were relatively plentiful and wages were rising for most workers, to one in which workers must struggle to find even the lowest-paying jobs. For most workers, wages are now barely keeping pace with inflation, and with employers reducing or eliminating health coverage, even workers with jobs often find themselves worse off than they were two years ago.

In addition to the people counted as unemployed, the number of people who are working part time but would like full-time work has risen by nearly 1.5 million since 2000.

The one exception to this pattern has been workers over age 55. These people have been entering the labor market in large numbers over the last two years, even as overall employment has plunged. The obvious explanation is that many early retirees have been forced back to work, often at McDonald’s-type jobs, after their savings plunged with the stock market crash. In many cases, these older workers are displacing teenagers who would otherwise hold these jobs.

The weak labor market has virtually stopped real wage growth. In the second half of the nineties, wages were outpacing inflation by almost two percentage points a year. This was the first sustained period in which real wages were rising since the ’60s. However, in the last year, wage growth has slowed to the point where wages are moving at approximately the same rate as inflation. Since the inflation indexes do not pick up additional health care costs that employers pass along to workers, it is likely that most workers’ wages are not even keeping pace with their cost of living.

The economy has lost more than 2.6 million jobs in the last two and a half years. Until it starts generating jobs again at a rapid pace, the situation will only get worse for most of the work force. Unfortunately, the bursting bubbles, like the collapse of the stock market, that led to the recent recession have counterparts still to come—the housing bubble is yet to burst. This means that, for working people, the times are likely to get worse before they get better. It appears, too, that those hardships will go unnoticed by the president, unacknowledged by investors, and underreported by the media.