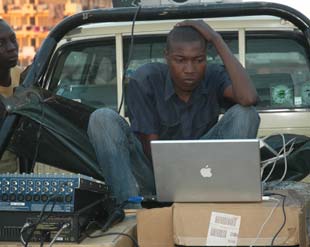 Fred Orek, a cameraman and assistant editor with the Kenyan video collective Slum-TV, works on a shoot in October 2007.

While news reports across the world have displayed images of chaos shaking Kenya, an alternative media system driven by ordinary Kenyans is emerging in the East African country to help raise the voices of the seldom heard. The violent aftermath of President Mwai Kibaki’s disputed election in December has detonated Kenya’s festering ethnic, land and power struggles, leaving hundreds dead and displacing hundreds of thousands. But it has also energized the country’s independent media-makers, many of whom see their work as key to overcoming the crisis.

Fusing mass communication with political organizing, the Kenya Independent Media Center (IMC) has aired local activists’ perspectives on the violence and its root causes. Through its growing network of independent reporters, IMC Kenya aims to generate “information for action,” according to co-founder John Bwakali.

The organization also tries to lead by example through its non-hierarchical structure as a collective–a potential model of radical self-empowerment in a society besieged by political disillusionment.

In an IMC audio piece, Jimani, a young activist with the Warriors, a Nairobi-based self-help group, reflects on the desperation that has pushed many of Kenya’s youth into violent clashes.

“Why has a youth gone out to fight, ready to die?” he asks on a recording produced shortly after the elections. “Is it freedom for those who are oppressed in this world? Maybe you can say so.” But he continues: “As a [young] man is ready to go out there and die because he wants his voice to be heard, we need to give them that chance. We need to hear what they have to say to us.”

Some youth are amplifying their voices through a video collective called Slum-TV, led by Kenya-based media activists. By documenting everyday struggles in Mathare–a densely populated slum in the capital Nairobi–the project enables young people to produce homegrown media and, through local public screenings, fosters community dialogue. Following the outbreak of the post-election violence, Slum-TV has focused on current recovery efforts that bring together activists from different ethnic groups.

Slum-TV co-founder Sam Hopkins noted the contrast with corporate media’s coverage of “tribal” violence. “The idea behind focusing on characters who have crossed the ethnic divide is really just to provide another version of what’s happening, to counteract the mainstream international media,” he says.

As an ear to the ground in their communities, grassroots media activists have sometimes been ahead of the news.

Patrick Shomba and fellow artists, who founded the Ghetto Film Club media collective in 2006, foreshadowed the approaching unrest in a screenplay titled “The Ghetto President.” The film, created last year as a civic-education project, explored issues of corruption, voting rights, youth rights and ethnic conflict. After scraping together volunteer help and borrowed equipment, the group completed the film a few days before the election and held a public screening in a Nairobi slum. Their next film, they hope, will be about reconciliation.

Since cities like Nairobi are ethnically diverse, Shomba views street-level art as a way to “maintain the peace here in the urban sector, with a mix of culture and a mix of tribes.”

Local youth lead the project as actors and producers–a rare opportunity for them to overcome marginalization. The group aims to eventually turn media work into a sustainable income source for young people wrestling with poverty, crime and lack of schooling in their communities.

In the post-election turmoil, Shomba is also working with Kenya’s budding community radio scene to air local news, as well as anti-violence messages, on three small urban stations, with an estimated reach of more than 2 million listeners.

“What our guys can do at the grassroots,” he says, “the mainstream media can’t come and do.”

Though still in its infancy, grassroots reporting is gaining traction in Kenya. Since 2007, the Web-based Voices of Africa project, an initiative of the Africa Interactive Media Foundation, has delivered field reporting from mobile-phone-based correspondents in Kenya. Its coverage features video commentary from everyday people on politics, underlying social problems and concerns about the ongoing mediation talks.

Although Kenya’s independent media-makers generally do not face outright authoritarian restraints, more insidious barriers can impinge on their work.

IMC Kenya reporter Oscar Odhiambo recently fled Kenya temporarily for Tanzania, in part, he says, because he felt that as an independent journalist, he risked being targeted by violent factions for speaking out. Meanwhile, he says, Kenya’s establishment press has failed to hold powerful officials and business elites accountable because it is hampered by corporate control.

“The media as an institution must be set free,” he says, “so that we as independent journalists can also use that freedom to express an autonomous view of what we believe is true.”

Yet one of the most immediate challenges facing independent media activists is simply logistics. Reflecting the global “digital divide” between North and South, Kenya’s online infrastructure is threadbare. Internet users make up less than 10 percent of Kenya’s population, according to international estimates; both media producers and consumers typically lack consistent access. In response, media-makers are repurposing old-school technologies to reach new audiences.

While IMC Kenya runs a website, co-founder Bwakali acknowledged that its digital material is out of reach for most Kenyans. The key is to capitalize on “good old traditional distribution networks,” he says–cassette tapes and compact discs, distributed hand to hand. The group also plans to work with mini-bus operators to air IMC recordings on their daily routes.

For Slum-TV, just the shared experience of a public audience has deep social resonance. “To see the reaction of a crowd when we have a screening is really incredible,” says Hopkins. In Mathare, where hundreds of thousands struggle with poverty and political disenfranchisement, “the potential to affect people’s aspirations is huge.”

In January, the blog Kenyan Pundit ran a self-penned “obituary” by writer Simiyu Barasa. “I know not my tribe,” he wrote. “I have only known myself as Kenyan, and others as fellow Kenyans. In these times, belonging or not belonging [to a tribe] means not being dead or being seriously dead. What chances does a person like me have?”

While fostering political discussion, Kenya’s blogosphere has also taken a proactive role in coping with the crisis. The Web-based mapping project Ushahidi.com tracks citizen-reported violent incidents, along with local peace-building efforts, across the country.

Nairobi-based political cartoonist and blogger Patrick Gathara distills pointed dissent into scathing images and commentary. One of his recently posted comics shows Kibaki playing the fiddle and singing as the city behind him blazes in flames.

To help raise consciousness through art, Gathara has worked with the Association of East African Cartoonists (KATUNI) to launch a political cartoon competition, which is themed around the current conflicts and ideas for solutions.

“Involving the Kenyan people in the debate over the future of their country and giving them nonviolent avenues of expression,” he says, “is the way out of the current crisis.”

As activists look to recast the country’s political landscape, IMC Kenya co-founder Bwakali says free media is a critical tool for opening dialogue: “You are telling each and every person that your voice matters, that your opinion can play a key role toward making a difference.”