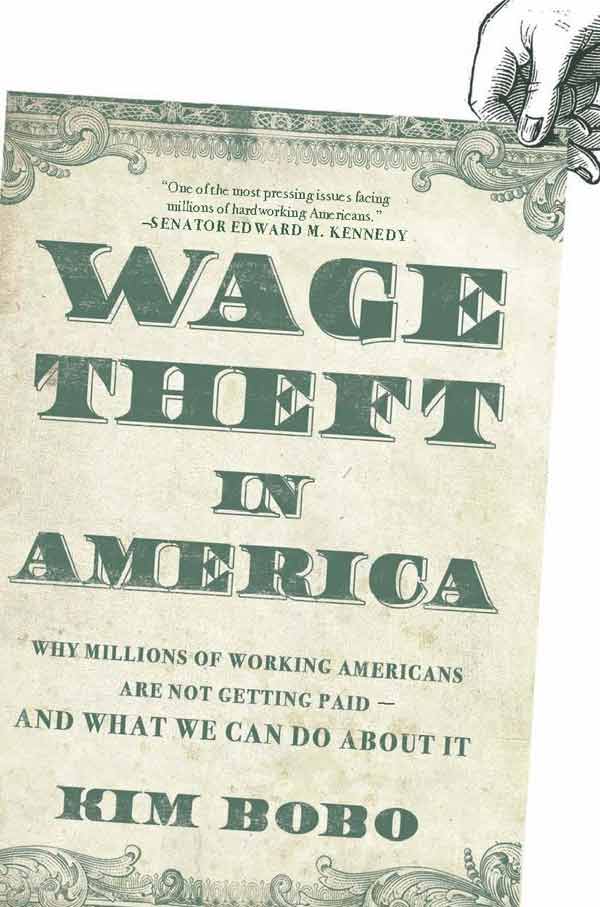 The Crisis of Wage Theft

Billions of dollars in wages are being illegally stolen from millions of workers each and every year, writes Kim Bobo, in this excerpt from her new book Wage Theft in America (The New Press)

As a society, when we allow employers to steal wages from some workers, it drives down wages and standards for all workers.

A few years ago, I heard about a garment factory near my house where workers weren’t making the minimum wage, or so I was told. I couldn’t believe that such a place operated four blocks from where I live. I didn’t even know it existed.

I’d heard about this place because some workers had visited the Chicago Interfaith Workers Center and told their stories. In addition, I’d heard that this place was a sole subcontractor for a leading national company. I wanted to know what was going on.

With the help of Interfaith Worker Justice colleagues, we organized a fact-finding delegation of religious leaders to investigate what was going on. One cold Chicago morning, twenty-five of us dropped in at the factory. The place was located in a largely residential neighborhood in a small turn-of-the-century industrial building that faces the Metra train stop. There was no sign outside identifying the facility. The front door was unlocked, so we marched on up to the second floor.

Sure enough, when we opened the second door at the top of the stairs, we stepped into a small entryway, which then had a door opening to a large high-ceiling room full of Latina immigrant women huddled over sewing machines. Despite twenty-five folks, including some in clerical collars, dropping in unexpectedly, no one looked up from their machines. (I can’t believe it was because they were accustomed to regular visitors.)

Despite the cold outside, the workroom was quite warm. We all imagined how hot the room would be in August. Such Chicago buildings have impressive boilers, but no air conditioning.

We scoured the place looking for the manager. Once the manager got over the shock of seeing us in her place, she quickly tried to shoo us back into the lobby area. I must confess, we were not the most cooperative crowd. It took us a while to get back to the lobby.

Once back and contained, we began peppering her with questions.

“What do you pay these workers?”

Slapping her forehead, “Why didn’t they tell me!”

“Do you provide any health insurance for the workers?”

“Well, I asked them if they wanted health insurance, but none of them did. They all get it through their husbands. Oh, and these workers are like my family. We celebrate birthdays and babies.”

Meanwhile, one of our colleagues went to use the bathroom. A worker jumped up to give her a few sections of toilet paper.

So we asked the manager, “What’s the deal on the toilet paper?”

“Oh, I used to provide it, but the workers would steal it, so now they prefer to bring their own.” Right.

But this manager was not the only culprit here. The workers claimed this garment sweatshop was sewing exclusively for Cintas, the nation’s largest industrial laundry. Cintas is not a mom and pop shop that doesn’t know any better. It is a leading national company. The Cintas website describes itself as follows:

Cintas operates more than 400 facilities in the U.S. and Canada, including 11 manufacturing plants and seven distribution centers that employ more than 34,000 people.

Cintas has grown for 38 consecutive years, with fiscal 2007 sales of $3.71 billion, an increase of 8.9 percent from 2006. Net income of $334.5 million increased 3.4 percent from $323.4 million last year, and earnings per diluted share increased 8.9 percent from $1.92 last year to $2.09 this year. Cintas was founded by Richard T. Farmer, Chairman of the Board. Scott Farmer was appointed Chief Executive Officer in 2003 and Bob Kohlhepp serves as Vice Chairman.

Several months after our call at the factory, Interfaith Worker Justice (IWJ) published a report called “Airing Dirty Laundry” based on the delegations and other interviews; as a result, Cintas threatened to sue IWJ and all its affiliates. When I called to talk with the attorney representing the company, he told me Farmer and Kohlhepp were willing to meet with some religious leaders. At the meeting, we came with stories we had gathered from workers around the country. Farmer and Kohlhepp were prepared with their power points, their directors of contracting and diversity and health and safety, and so on. Our spokespeople included a guy who had taught Kohlhepp’s children in confirmation classes, a Methodist bishop, a Baptist pastor, a nun, and a few others. We brought no real expertise, just a concern for workers.

On a personal level, Farmer and Kohlhepp and their staff were all very nice and pleasant. They give generously to their churches and the community. I’m sure they are great with their own families. I’m sure they are very nice people. Oh … and did I mention that Farmer is one of the richest men in the state of Ohio?

Still, Cintas is a part of the crisis of wage theft in the nation.

The Chicago Interfaith Workers Center helped Cintas’s subcontractor’s workers file complaints for the lost wages, for the sub-minimum wages they received, with the Illinois Department of Labor. Eventually, the workers recovered $209,867.82 in back wages and penalties.

Cintas, as the ultimate employer of these workers, had essentially stolen over $100,000 from poverty wage workers with no benefits by allowing them to receive less than the minimum wage, the lowest amount that workers can legally be paid. This is what I mean by wage theft.

And Cintas and its subcontractor are not alone. Not by a long shot.

Billions of dollars in wages are being illegally stolen from millions of workers each and every year. The employers range from small neighborhood businesses to some of the nation’s largest employers–Wal-Mart, Tyson, McDonald’s, Target, Pulte Homes, federal, state, and local governments and many more.

Wage theft occurs when workers are not paid all their wages, workers are denied overtime when they should be paid it, or workers aren’t paid at all for work they’ve performed. Wage theft is when an employer violates the law and deprives a worker of legally mandated wages.

Wage theft is widespread and pervasive across all types of companies. Various surveys have found that:

Although wage theft is the most pernicious when employers steal money from workers earning low wages, wage theft affects many middle-income workers too, including construction workers, nurses, dieticians, writers, bookkeepers, and many more. Wage theft affects young workers, mid-career workers, and older workers. Although some of the worst wage theft occurs when immigrant workers aren’t paid minimum wage or aren’t paid at all, the largest dollar amounts are stolen from native-born white and black workers in unpaid overtime.

Cases of unethical employers stealing wages have reached epidemic proportions. As a nation we are facing a crisis of wage theft.

Kim Bobo, founder and executive director of Interfaith Worker Justice and a columnist for Religion Dispatches, is the author of Wage Theft in America: Why Millions of Working Americans Are Not Getting Paid -- And What We Can Do About It (The New Press) and co-author of Organizing for Social Change, the best-selling organizing manual in the country.