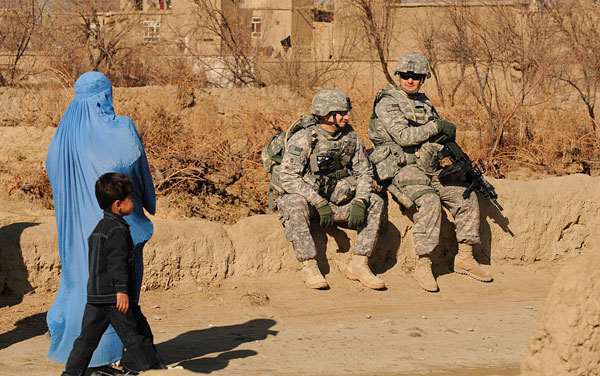 A burqa-clad Afghan woman and her son walk past U.S. soldiers in a village outside Bagram Air Base, 30 miles north of Kabul.

Putting a Stop to Stop Loss

Pentagon ends the back-door draft, but critics fear a return with Afghanistan surge.

On March 18, Defense Secretary Robert Gates announced that the Pentagon will no longer use the controversial “stop loss” policy to extend service members’ enlistment. For Army Sgt. Casey Porter, it’s a welcome decision, although it comes too late for him.

In March 2008, two months after he was supposed to be discharged from the Army, Porter shipped out for his second tour in Iraq. The 28-year-old Texas native had been looking forward to resuming his career as a budding filmmaker. But a month before his contract was set to expire, Porter received notice he had been “stop lossed,” meaning his active duty enlistment had been involuntarily extended. As Porter explains it, he was “stuck.”

“My options were pretty limited,” he says. “I could go back [to Iraq], I could go AWOL, which would have pretty much destroyed my life–I mean, no one joins the Army to be dishonorably discharged. It was like, ‘What do I do?’ “

Porter says his notification didn’t come as a surprise. By the time he received it, thousands of service members had been affected by stop loss, and their plights had drawn a fair amount of media attention.

Stop loss allows the military to keep soldiers on active-duty status beyond their enlistment periods if the soldiers’ unit deploys within 90 days of the end of their service commitment. The policy became part of the U.S. Code governing the armed forces in 1973 (with the transition to an all-volunteer military) ostensibly to ensure unit cohesion in times of war.

But Porter, who returned to the United States in early March, dismisses that rationale. At least where Iraq is concerned, he says commanders relied on stop loss as a way of maintaining troop strength in a war that was becoming increasingly unpopular among soldiers.

Prior to being reinstated by then-Defense Secretary Donald Rumsfeld on Sept. 24, 2001, stop loss had been used in previous conflicts–including the Gulf War and Operation Allied Force in Kosovo. But it had never been used for such an extended period to affect so many soldiers.

The policy has drawn criticism from veterans’ groups and lawmakers. Sens. John Kerry (D-Mass.) and John McCain (R-Ariz.) have called it a “backdoor draft.” And Rep. Joe Sestak (D-Pa.), a retired vice admiral and the highest-ranking military veteran in Congress, says that while he’s not against the program in principle, its overuse is indicative of the larger failure of Bush administration policy.

“The problem with this war … is that there was a lack of a cohesive strategy after the initial invasion of Iraq,” Sestak told In These Times via e-mail. “Better planning should have been utilized which could have prevented this policy from being in place for so long. In fact, I believe that a number of the stop loss instances would be proven unnecessary if reviewed.”

Under Gates’ plan, the Army Reserve and Army National Guard will mobilize units without using the policy beginning in August and September 2009, respectively, while the regular Army will deploy its first unit without stop loss by January 2010. The Pentagon will also start paying soldiers who are stop lossed during fiscal year 2009 a monthly stipend of $500.

“I think it’s a long overdue change in policy and I think it’s a good change in policy,” he says. “The question I have is will they be able to stick by this policy if they are escalating seriously in Afghanistan? I think that a soldier looking at the situation would have cause to be worried.”

In 2004, Lobel represented eight soldiers who filed suit in U.S. District Court for the District of Columbia, challenging the extension of their enlistments under stop loss. A federal judge dismissed the case, pointing to a clause in the armed services enlistment contract that warns recruits of the possibility of stop loss.

Lobel argues that given its impact on soldiers’ lives, it warrants more than a passing mention in the contract. The Defense Department’s four-page enlistment contract has since been updated and now includes seven references to involuntary enlistment extension; it also specifically mentions “stop loss,” which was absent in older versions.

While the number of soldiers affected by the policy since 2001 has varied from month-to-month, Reuters reported that by 2006, more than 50,000 soldiers had been stop lossed during the conflicts in Iraq and Afghanistan. According to the Pentagon, 13,000 soldiers are currently affected by the program, which is only used by the Army.

Gates said changing conditions in Iraq, a new unit rotation program, and the increasing size of the Army made discontinuing the program possible. With the economy on the skids, 2008 was the best year for Army recruitment in more than six years. But with a new troop surge underway in Afghanistan, Sestak says it’s premature to assume that stop loss is a thing of the past.

“All service members understand when they join the military that there is always a chance … they may be called upon to stay beyond the term of their obligated service,” he says. “The Secretary of Defense made the right decision to halt stop loss [but] if it becomes necessary in Afghanistan, military personnel must understand that the policy may be further implemented.”