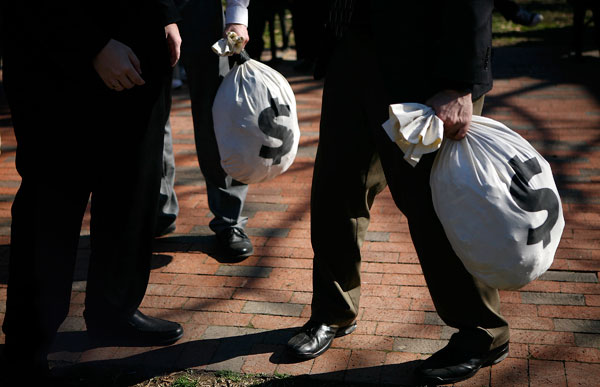 On March 9, supporters of the Employee Free Choice Act carry money bags at a rally in Layfaette Square in Washington, D.C.

The fate of labor’s top legislative priority is in the Senate’s hands.

Sen. Arlen Specter (D-Pa.), who has proposed making it illegal for union organizers to visit workers’ homes without prior consent, will likely face a progressive primary challenge in the Fall.

When Congress votes on the Employee Free Choice Act, it will decide not only whether workers will be able to organize unions more easily and whether America will build a stronger economy based on shared prosperity. It will also decide how democratic America will be.

The fate of the proposed legislation hinges on a few senators under intense pressure from corporations. But labor leaders remain optimistic that the legislation will pass–most likely with some tweaks.

“We’re definitely in a tough fight,” says Stewart Acuff, assistant to AFL-CIO president John Sweeney. “This is the largest grassroots campaign in labor history. We’re going to play it out as hard and strong as we can.”

The legislation, a top union priority supported by President Obama, would provide legal recognition of a union at a workplace if a majority of workers signed statements of support. Now, even if a huge majority of workers sign union cards, employers can demand that the National Labor Relations Board hold an election, giving the company and anti-union consultants time to bully employees into voting against unionization.

The bill would also stiffen penalties for all-too-common employer violations of labor law–such as firing union supporters–and provide the option of mediation and arbitration of first contracts when employers balk at serious bargaining.

Business groups and their right-wing allies focus on claims the law would deny workers’ right to a secret ballot, which they portray as the hallmark of democracy. But businesses clearly oppose the bill not for any alleged democratic shortcomings but because they oppose unions. In doing so, they oppose freedom of association, a bedrock democratic principle.

Workers can join political or community groups at will, without secret ballots, but can only form unions without a ballot if the boss agrees. Most employers make union elections as much a free and democratic expression of workers’ views as North Korea’s secret ballots.

The congressional process of deciding on the legislation is a little more democratic, but still deeply flawed. A solid majority in the House voted for EFCA in 2007, but while a majority in the Senate would now, supporters need 60 votes for cloture, or ending debate. With the recent defection of Pennsylvania’s Arlen Specter to the Democratic Party (and assuming Al Franken becomes Minnesota’s new senator), Democrats and independent supporters will number 60. That means Dems will in theory have the votes needed to end an inevitable EFCA filibuster.

But in March, Specter, who co-sponsored EFCA in 2007, said he would no longer support cloture on the bill, reiterating this point when he announced his party switch in April. And Sen. Blanche Lincoln (D-Ark.), from the home state of notoriously anti-union Wal-Mart and Tyson Foods, said she would not support EFCA in its current form because it is too “divisive.”

Both senators face re-election next year. Running on the Democratic ticket, even with Obama’s promised support, Specter could face a significant progressive primary challenge. Specter’s switch is more likely to increase the likelihood of a compromise than win EFCA 60 votes. That could leave labor a tough choice between a stale half loaf today or a possible whole loaf in the next Congress.

Since the 40-plus senators now supporting a filibuster disproportionately come from less populated states, a tiny minority is undemocratically blocking expanded democracy for the majority.

In fact, a clear majority of Americans favor EFCA’s provisions, according to surveys by Hart Research. After pollsters described EFCA reforms, 73 percent of Americans surveyed supported it (including 69 percent in right-to-work states). Even when respondents heard the most potent arguments on both sides, strong–albeit smaller–majorities supported EFCA by margins of about 19 percent.

The U.S. Chamber of Commerce and a shadowy network of front groups have kept most businesses–even those who accepted majority sign-up to recognize a union–toeing a hard line against the bill.

But some small business owners around the country have spoken out for EFCA as good for business and the economy. “We need a strong working middle class or my business will suffer,” says Darren Horndash, owner of the 33-store Wisconsin Vision optical chain. He says his unionized employees’ loyal performance helps retain customers.

Corporate opponents claim widespread unionizing will shut down businesses and cost jobs, but a new study by the Economic Policy Institute concludes that “the biggest fear voiced by employer groups regarding unionization–that it will inevitably drive them out of business–has no evidentiary basis.”

And a new Center for Economic and Policy Research study, led by Massachusetts Institute of Technology professor Thomas Kochan, argues that unions are associated with high-performance workplaces yielding 15 to 30 percent “performance premiums” in efficiency, quality, employee engagement and profitability.

Cracks in the monolith?

One group of big companies–partly unionized Costco and staunchly anti-union Whole Foods and Starbucks–has broken with the hard-line Chamber of Commerce. The companies have proposed quicker elections, before which unions and business would both have access to workers. But it opposes majority sign-up and arbitration, and also proposes a new right of employers to initiate union decertification. While unacceptable to unions, the group’s proposal shows cracks in the corporate monolith.

Unions are keeping up the fight for EFCA as proposed, but they acknowledge changes may be needed to win over 60 senators. If Lincoln and Specter can be persuaded to help end a filibuster, they’re confident all other Democrats will as well.

“Taking steps to rebalance the playing field was always going to be tough,” says Change to Win Executive Director Chris Chafe. “But we’re still in a strong position to achieve major labor law reform … It will look a great deal like [EFCA].”

Some changes–such as designing sign-up cards that explicitly give workers the choice of an election or immediate approval of the union or lengthening the time before arbitration can be requested–would not seriously compromise the legislation. But many proposals, including one from Specter that would bar union organizers from visiting workers’ homes without prior consent, would tilt the playing field even more against unions.

Likely proposals to mandate elections within a short time–say, five to 10 days after a union petition–are problematic, even if unions got equal access to workers. “It takes a short time for employers to poison the well,” one organizer explained. Indeed, the fundamental problem is that employer speech in a workplace is inherently coercive, since the boss has power over a worker’s job.

“We are weighing a bunch of options, but the last thing we want to do is make the mistake of the other side and bully or threaten people,” AFL-CIO’s Acuff says. “It doesn’t work well, but it also points out what we’re trying to stop–the bullying and intimidation every day in the workplace.”

Unions have maintained a steady push for EFCA, including more than 400 actions during Congress’ spring break. They’ve mobilized non-union supporters and given prominent roles to workers with personal stories to tell, like Colorado electrician Dan Luevano.

In 2005 Luevano and most of his fellow workers at Ries Electric near Denver asked their boss to recognize the Electrical Workers as their union to help resolve problems. The boss called everyone in and threatened to fire them if they voted for a union. Luevano said he would, and the next workday he was fired. Though the National Labor Relations Board reinstated him, his boss isolated him and cut his hours while continuing to violate labor laws by fighting the union.

Luevano eventually left Ries Electric for a union firm. But he has told his story in community forums and interviews, and in congressional hearings and meetings with Colorado senators.

“I wouldn’t want anyone to go through what I went through,” he says. “I’m not a professional lobbyist, just a working person, trying to make life better for my co-workers and our families.” By doing so, Luevano is also trying to make America better–and more democratic. It’s a tough fight.