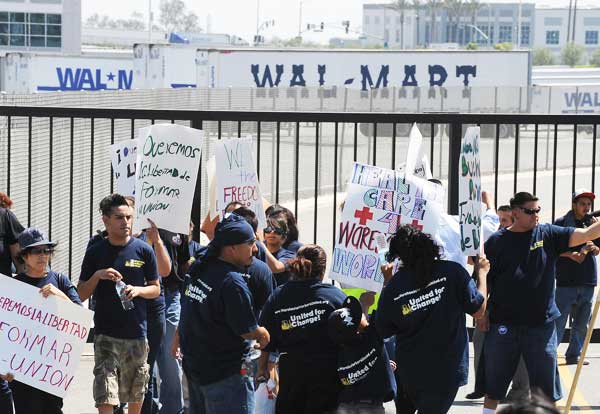 Wal-Mart workers and members of the community labor organization Warehouse Workers United protested outside a Wal-Mart warehouse and distribution facility in Fontana, Calif., on May 14, 2009. The protesters accused the retail giant of trying to prevent employees from forming unions. (Video of the protest can be watched here.)

The National Labor Relations Board eventually ruled that Wal-Mart had systematically spied upon numerous workers and fired key labor partisans.

Since liberal Democrats and their labor supporters introduced the Employee Free Choice Act into Congress earlier this year, opposition to the legislation has reached a fever pitch.

The main line of attack from corporations and business trade associations zeroes in on EFCA’s “card check” provision, which would give union advocates the option of avoiding a contentious and often employer-dominated National Labor Relations Board (NLRB) election. The provision would allow a majority of workers in any given workplace to enroll in a union via a simple card-signing.

A typical corporate response to the bill–which remains in committee in both the House and the Senate–came from Wal-Mart, the nation’s largest company. The proposed labor law would “effectively eliminate freedom of choice and the right to a secret-ballot election,” Wal-Mart spokeswoman Daphne Moore said in March, a few days after the bill was introduced. “We believe every associate or employee should have the right to make a private and informed decision regarding union representation.”

So Wal-Mart champions worker freedom. To get a sense of that company’s Orwellian definition of the concept it is useful to revisit the scene of a union organizing effort at Wal-Mart’s Kingman, Ariz. discount store. One might well look at dozens of other failed organizing attempts at Wal-Mart, but this campaign in the late summer of 2000 was exceptionally well-documented. The account that follows is based not only on NLRB reports and opinions, but on an authoritative Human Rights Watch report and internal company documents that were put in the public domain after litigation before the labor board and the federal courts.

Summers are hot in Arizona, and the young men who work in Wal-Mart’s Tire and Lube Express (TLE) department get their hands dirty, have few prospects for promotion and are well aware that similar blue collar jobs in garages and car dealerships pay a lot more. Such was the case in Kingman where an otherwise humane manager, under corporate pressure to keep labor and maintenance costs down, refused to spend the $200 needed to repair an air-cooling system essential in the 110 degree heat. So the TLE workers got in touch with the United Food and Commercial Workers, which on August 28, 2000, filed a petition with the nearby Phoenix office of the NLRB to represent as many as 18 automotive service technicians.

The reaction from Wal-Mart managers, both at the Kingman store and at corporate headquarters in Bentonville, Ark., was virtually instantaneous. Within 24 hours a Bentonville-based “labor team” had flown into Kingman, where they joined a growing cadre of district and regional managers from Arizona and Nevada. In all more than 20 outside executives flooded the store. Wal-Mart replaced the Tire and Lube department manager with a high-level personnel executive, untutored in changing oil or tires but well-versed in the corporation’s union avoidance program. Loss prevention–the company’s shoplifting police–got busy as well, training a new set of cameras on work areas in the tire and lube shop. “I had so many bosses around me, I couldn’t believe it,” rememberes Larry Adams, a union supporter who worked in the TLE at that time. “They weren’t there to help me. They were there to bug me. It was very intimidating.”

The key labor team figures were Vicky Dodson, a 13-year veteran in Wal-Mart’s People division, and Kirk Williams, a young law school graduate from Chicago that Wal-Mart had hired just a few months before. Dodson was a pro, a forceful and controlling “pistol,” remembers one of the assistant managers who came under her authority; “an intelligent, articulate, sophisticated individual” in the more judicious words of an NLRB administrative law judge. Williams, who had worked his way through Kent State as a Wal-Mart assistant store manager, including a stint in loss prevention, was a coldly ambitious functionary who would soon spend enormous amounts of time on the corporate jet putting out union fires throughout the company’s retail empire.

Most people in the store, management and workers alike, called the Bentonville labor team the “union busters” or the “Nazi SS.” Not unexpectedly, Dodson and Williams were contemptuous of the existing store management, whose maladroit handling of layoffs and scheduling issues they blamed for precipitating the union uprising. “They took us out of the store for a couple of days,” Assistant Manager Tony Kuc says, “took us to a hotel, telling us how to handle the union, how to stop them from coming in…what to say, what not to say.” Within a few weeks the store manager had been transferred and demoted, his two assistant managers marked for dismissal, and the TLE district manager fired outright.

Within less than a week Dodson and her confederates met with 95 percent of all workers eligible to participate in the NLRB certification vote. Meanwhile, the labor team held daily meetings at 8 a.m. with all the salaried managers, as well as the hourly department heads, who they falsely claimed were part of the store “management” and therefore ineligible to take part in an NLRB certification election. “We were basically spies, spies for the store, spies for the company,” recalls a disenchanted associate. “We had to run our departments, do everything normally, and then be spies for them. The stress level was so high.”

Unionists complained, at Kingman and elsewhere, that “Wal-Mart has tricked hourly department managers into thinking they were part of the management team and therefore obligated to report any signs of union activity,” even though the NLRB ruled repeatedly against the company about the status of these hourly employees. Observed Michael Leonard, a UFCW official at the time, “Wal-Mart’s M.O. is to test the limits of the law, and to only change its prepackaged anti-union program when it is forced to.”

The labor team screened one of five different anti-union videos every day. “Wal-Mart Under Attack” was a lurid depiction of union thuggishness and disruption directed at a company that was portrayed as merely trying to provide inexpensive goods for ordinary working people. “Sign Now, Pay Later” urged Wal-Mart workers to resist the siren song of the union organizers, who would do and say anything to win another signature on a union card, all the while ensnaring the hapless retail worker in a world of burdensome dues and serf-like subservience to an alien, boss-ridden organization. These videos, always followed by a Q and A with a member of the labor team, were highly effective. A worker later interviewed by Human Rights Watch remembered: “I actually had fears after seeing videos of Molotov cocktails and rocks, pelting rock, hurling bottles.” Another said, “After those meetings, minds started changing” as one-time union supporters turned against the UFCW.

Dodson, Williams and other top managers from the southwest stayed in Kingman for nearly two months. This was the period during which the local NLRB held hearings to determine the size and composition of the TLE unit and in which both the UFCW and the Wal-Mart labor team marshaled their forces for the certification election itself. In minutely detailed reports back to Bentonville, labor team members described every instance of possible union talk, every wavering worker and every meeting. Dodson kept track of the workers who wore union pins and the ones who took them off, what comments were made at the captive meetings and the degree of union sentiment in various departments of the store.

The labor team authorized raises for 85 percent of all workers, fixed the TLE cooling system and repaired other equipment in that same department. On October 9, Wal-Mart senior executive Tom Coughlin jetted into Kingman to tell a group of TLE workers that the Wal-Mart “Open Door,” not the UFCW, was the solution to their problems. This was a clear violation of the spirit, if not the letter, of the existing labor law, which forbade management efforts to bribe, promise or cajole employees in the midst of an organizing effort. “If you have any questions or problems, don’t hesitate to call me,” Coughlin told his grease-stained listeners. “I will get you some results. I can override anybody.”

Given all this, it is hardly surprising that the UFCW organizing drive collapsed in inglorious defeat. Although the Labor Board ruled that the TLE was an appropriate bargaining unit, the union lost key supporters there within weeks of the labor team’s arrival in town. Union partisans had virtually no opportunity to counter the propaganda barrage unleashed by the Bentonville labor team. If they sought the telephone number of undecided associates, this violated Wal-Mart’s “no solicitation” rule; if they distributed leaflets in the parking lot or break room in the store, managers immediately called loss prevention and then patrolled the facility to pick up any stray literature.

And when UFCW organizers made evening house calls, Wal-Mart denounced this tactic as harassment and intimidation. So on October 24, UFCW lawyers filed a broad set of Unfair Labor Practice complaints against Wal-Mart, thus postponing indefinitely the NLRB election scheduled for just a few days later. Working life for the remaining pro-union people in the Kingman store became increasingly intolerable. Within little more than a year virtually all would be fired, forced to quit or simply leave in disgust.

The Labor Board eventually ruled, at Kingman and elsewhere, that Wal-Mart had systematically harassed and spied upon numerous workers, that it had threatened employees with a loss of benefits and raises if they supported the union, and that the company had fired outright key labor partisans. But none of this had any real impact on Wal-Mart’s anti-union operation, if only because the penalties were so trivial: a few thousand dollars in back pay for a few unjustly fired employees, plus a formal notice briefly posted in the break room pledging to obey the labor law.

In its authoritative report on Wal-Mart, “Discounting Rights: Wal-Mart’s Violation of U.S. Workers’ Rights to Freedom of Association,” Human Rights Watch concluded that the company “has translated its hostility toward union formation into an unabashed, sophisticated and aggressive strategy to derail worker organizing at its U.S. stores that violates workers’ internationally recognized right to freedom of association.”

The events at Kingman took place more than eight years ago, but there is no evidence that Wal-Mart has altered its internal anti-union policies in the slightest. Wal-Mart workers, all 1.4 million of them in the United States, need the Employee Free Choice Act.

[Editor’s note: This article was adapted by the author from his book The Retail Revolution: How Wal-Mart Created a Brave New World of Business (July 2009), about which more can be learned here.]

Nelson Lichtenstein teaches history at the University of California, Santa Barbara, where he directs the Center for the Study of Work, Labor and Democracy. He is the author of The Retail Revolution: How Wal-Mart Created a Brave New World of Business (2009) and The Most Dangerous Man in Detroit, and editor of Wal-Mart: The Face of Twenty-First-Century Capitalism (2006), a collection of essays.