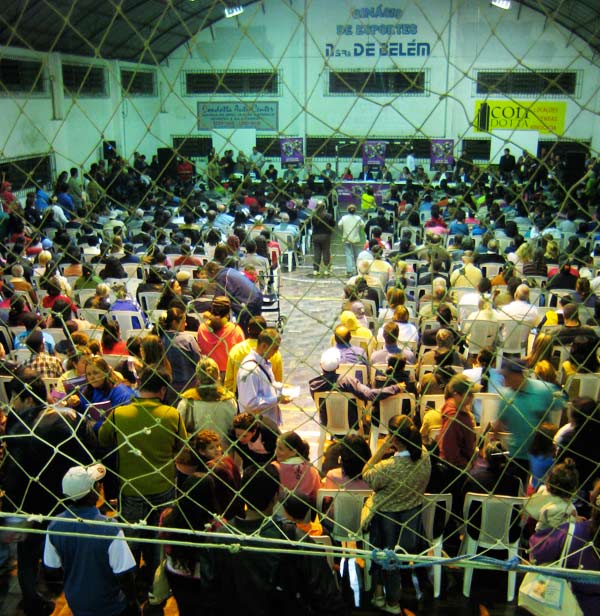 Budgets by the People

With cronyism, a drop in funds and almost everything behind schedule, long-time participants worry the process could be headed toward extinction

On a chilly evening in late May, hundreds of Porto Alegre, Brazil, residents packed into the Cecores gymnasium of the working-class neighborhood of Restinga for their yearly regional Participatory Budgeting (PB) assembly. Mayor José Fogaça and his PB team sat before them at long tables. This year marked the 20th anniversary of the process in this southern city. The lively crowd cheered and waved banners. Residents spoke in support of their needs, or denounced the government for not fulfilling promises it had made. “Housing” was on the lips of many.

“I struggled. I’m proof of this,” said Fabiana dos Santos Nacimento, a mother of six, who won her own home through the PB process a decade ago. “I waited six or seven years to acquire my home. And now my daughters are here and I’m struggling to help them acquire a home next door.”

More than 750 residents voted housing as this year’s third most important priority, behind social assistance and roads. During the last decade and a half, thousands of working families with the National Movement for the Struggle of Housing (MNLM for Movimento Nacional de Luta pela Moradia) have won homes through participatory budgeting in this region alone.

The assembly was just one of 23 that occur in Porto Alegre every fall. At the assemblies, neighborhood residents participate in the allocation of city funds by prioritizing needs, proposing future government projects and electing neighborhood delegates and councilpersons to carry out their decisions throughout the year.

The Brazilian Workers’ Party first implemented participatory budgeting in the city two decades ago, under a wave of democracy that engulfed the country following the fall of Brazil’s brutal two-decade-long dictatorship in 1985. Since it started in 1989, city residents have organized thousands of public works, cultural, health and economic projects. The process has been replicated across the globe, and the World Bank now promotes participatory budgeting for “developing” nations.

Although the Workers’ Party lost control of the city government in 2004, Mayor Fogaça (who was re-elected last year under the centrist Brazilian Democratic Movement Party) promised to maintain the process.

On its 20th anniversary, this year’s assemblies had surprisingly high participation thanks to the federal “Minha Casa, Minha Vida” (My House, My Life) program, which promises to finance a million homes across Brazil by 2010. City officials told Porto Alegre residents that if they were interested in enrolling in the program, they should participate in the PB process. Residents came out in record numbers. “It has become part of the city. It is not a political process,” says Ernani Mário da Pereira, the city’s Participatory Budgeting Transportation theme coordinator. “The process is not part of the government–it is part of our residents.”

But with cronyism, a drop in funds and almost everything behind schedule, long-time participants worry the process could be headed toward extinction in Porto Alegre.

“The projects that we prioritize aren’t carried out,” said Roberto Oliveira, president of the Vila São Judas Neighborhood Association, in the region of Partenon. He strongly denounced the system’s shortcomings during a regional assembly in May. “In the last three years in Partenon, not one road was paved through participatory budgeting … Health, which was one of our priorities, didn’t get one cent.”

Like many city residents, Oliveira blames Mayor Fogaça for the process’ “half-dead, semi-vegetative state.” Porto Alegre residents are clear that any mayor who attempts to rid the city of Participatory Budgeting would quickly find himself without a job.

“So it’s easier not to eliminate [participatory budgeting], but in reality it doesn’t work. It’s propaganda,” Oliveira says.

Oliveira’s comments are echoed by the non-governmental organization Cidade, which has been following Porto Alegre’s participatory process from the beginning. Its statistics show that only one percent of the city budget is now debated in participatory budgeting, a tremendous drop from its heyday when all budgeting decisions were discussed and as much as 10 percent was decided directly by residents.

Nevertheless, participatory initiatives across the planet continue to look to Porto Alegre. In 2007, Cidade held an international conference on the future of participatory democracy. Some are now calling for a profound analysis of the system.

“After 20 years, we have passed from the inauguration phase, through the boom phase, the golden years, and now we are facing many difficulties,” says Cidade Director Sergio Baierle, who has been with the organization for nearly two decades. “I think that if you don’t discuss these difficulties, the other experiences that are trying to replicate the experience of Brazil will face similar problems.”

Despite the challenges, delegates and councilpersons continue to hold their weekly meetings, and Porto Alegre residents continue to participate, forcing the city government to follow through with their decisions.

“The process is not in good shape right now,” says Ubiratan Souza, the former coordinator of Rio Grande do Sul’s statewide participatory budgeting system, “It is much more a process of resistance, with the participation of the community.”