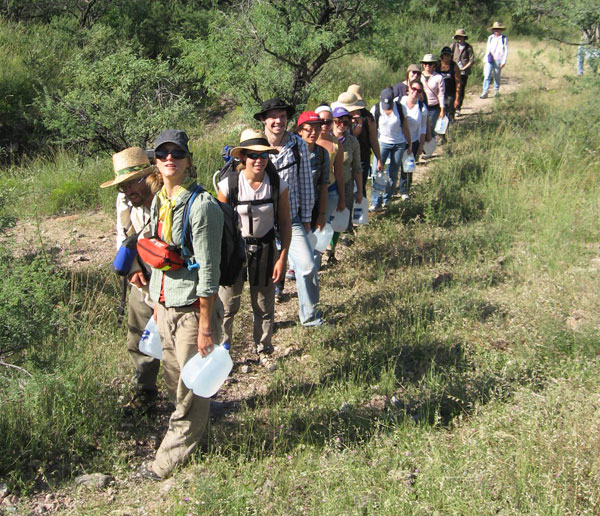 'If this is just about water jugs on the refuge, it's a very expensive way for them to go about proving that point,' Staton says.

Walt Staton faces up to a year in prison and a $10,000 fine for littering.

Though he doesn’t expect to actually get jail time, the 27-year-old Tucson web designer still thinks the charges are ironic and disproportionate. (Editor’s note: See update regarding Staton’s sentence below.) Staton says that when he was cited in December 2008, he was actually picking up trash while also leaving full water jugs in the Buenos Aires National Wildlife Refuge along the Mexican border.

Staton is a member of No More Deaths/No Mas Muertes, a border activism group that leaves water along trails for migrants crossing through the harsh, unforgiving Sonoran Desert. About 50,000 migrants cross through the wildlife refuge each year, down from about 250,000 since a seven-mile stretch of a 12-foot-tall fence was built along the border there, according to refuge manager Michael Hawkes. No More Deaths is one of three Tucson-area groups that provide water for migrants, who die at the rate of about one per day while crossing the border.

Another group, Humane Borders, headed by Rev. Robin Hoover, has permits to maintain three permanent water stations – large barrels marked with blue flags – on the wildlife refuge. But No More Deaths members say placing water right on the trails is also crucial, since most migrants cross at night and might miss the flags that mark the three Humane Borders stations on the 118,000-acre refuge.

In February 2008, No More Deaths volunteer Daniel Millis found the body of a 14-year-old Salvadoran girl. (The cause of death is unclear.) Two days later he was cited for littering while leaving water jugs on trails. He refused to pay the $175 ticket.

Then, on Dec. 4, 2008, three other activists were cited in addition to Staton, though charges against them were dropped. The U.S. Attorney’s Office in Tucson decided to pursue Class A misdemeanor charges against Staton, which meant a jury trial and the maximum possible sentence of a year behind bars and a $10,000 fine, Hawkes says. A spokesperson for the U.S. Attorney’s Office declined to comment for this story. When No More Deaths publicized a mission for July 9, Hawkes put extra officials on duty and cited 13 activists that day.

Hawkes says he is all for giving water to desperate migrants, but points out that there is plenty of water on the refuge already, including Humane Borders’ barrels, three Border Patrol rescue stations, and a few inhabited buildings and wells.

“There’s so much water here–people aren’t dying for lack of water. This refuge has more water available for migrants than any other stretch of land in southern Arizona,” Hawkes says. “But they seem to be very single-minded. I guess this is just convenient for them to drive in from Tucson and do something that makes them feel good.”

Hawkes says the trash left by migrants “would appall you–in some places it’s so thick you can’t even see the ground.” When refuge officials find migrants, they typically turn them over to the Border Patrol, which operates within the park. A portion of the refuge has been closed in the past due to violence associated with border crossing–caused mainly by “coyotes” (smugglers) or bandits targeting the migrants. “There were murders, rapes, robberies,” Hawkes says.

Hoover says there have been fewer than 10 deaths in the refuge during a period in which 1,500 migrants died in the region as a whole. Border crossings are significantly down this year, which most attribute to the economy and stricter border enforcement–hence the death toll is down as well. But Hoover thinks the proportional rate of deaths has actually increased, since stepped-up enforcement has pushed border-crossers into riskier areas. “Fewer people are crossing, but more of them are dying,” he says. “They’re making more difficult treks and dying in more remote areas.”

On July 24, Staton and other No More Deaths members met with Secretary of the Interior Ken Salazar. Members of all three Tucson groups are hoping an endorsement from the Department of the Interior will help them carry out their projects. Right now, they must overcome frequent opposition from local and regional officials.

“If this is just about water jugs on the refuge, it’s a very expensive way for them to go about proving that point,” says Staton, whose sentencing is August 11. “It seems to me they have a larger agenda. If you want to talk about disrupting wildlife, this is a war zone. They’ve got helicopters, ATVs, trucks all over the refuge–and they built a wall right through the refuge. Of everything out there, No More Deaths has the smallest footprint.”

Fife notes that last summer around 20 Border Patrol agents on horseback raided the group’s desert camp about 10 miles from the refuge.

“They said they had tracked migrants there,” he says. “I don’t think they need 20 guys and their PR agent to do that. There’s been a whole series of attempts to roll back humanitarian aid and intimidate aid workers.”

UPDATE: In early August, a judge sentenced Staton to one year of “unsupervised probation.” During that period, he “must complete 300 hours of community service focusing on trash removal from public lands,” the Arizona Daily Star reported. Staton was also banned from entering the Buenos Aires National Wildlife Refuge.