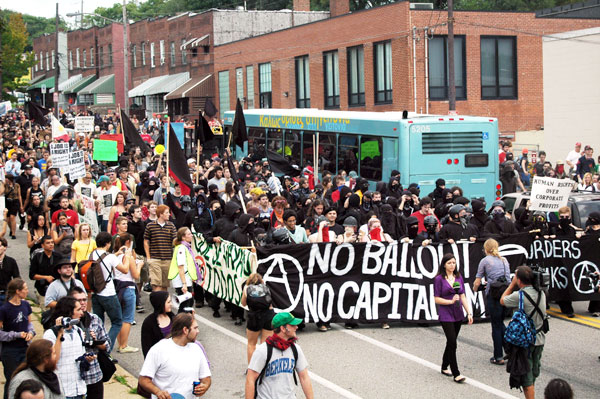 The global justice movement's strength lies in the fact that as a constantly evolving organism, it has the flexibility to adapt to changing circumstances.

To view "Protesting the G-20 Summit," a slideshow of photos taken by Christopher Moraff from Pittsburgh's streets, go here.

When activists from around the world took to the streets of Pittsburgh in late September to protest the gathering of the Group of Twenty nations (G-20), they were not only putting the new administration in Washington on notice that “change” is more than a campaign slogan. They were reaffirming their commitment to a world that represents the interests of the poor and disadvantaged over that of the powered elite.

The near collapse of the global economy in 2008–which exposed the failings of neoliberalism–has propelled the anti-globalization movement to a level of renewed relevance.

“Positions the movement had in the late 1990s–being against deregulation for example–are now becoming more popular,” Heather Gautney, an expert on global justice, said in an interview with Fordham University magazine In Focus. “Even mainstream politicians are saying ‘we didn’t regulate corporations and look what happened.’”

That’s quite a leap from 2001, when more than a few critics had written off the anti-globalization movement off as a relic of the ’90s and a victim of the shift in discourse that followed the terror attacks in New York and Washington. Following 9/11, to question American motives and actions was tantamount to defeatism, while the type of direct action associated with the so-called “Black Bloc”– the tell-tale black-clad anarchist youth, which for better or worse had for years served as the public face of anti-globalization–became unthinkable.

Writing in 2001, Murray Dobbin, an author and analyst with the Canadian Centre for Policy Alternatives, called for a “reassessment of our language and tactics” and the need to transition the movement from “anti-globalization” to “pro-democracy.”

Around the same time, Joshua Karliner, in the essay “Where Do We Go From Here?” published in the online magazine CorpWatch, warned that the movement risked becoming marginalized–“a mere footnote to an ongoing narrative of injustice and war”–if it didn’t “assert the relevance of our issues in a sophisticated and nuanced way.”

In the midst of this movement soul searching, in 2003 the United States invaded and occupied Iraq. For the next six years many domestic activists took a hiatus from confronting corporate globalization and pushed for an end to the killing in the Middle East.

“[T]he focus of progressive attention tends to shift in that period,” says Mark Engler, a senior analyst with Foreign Policy in Focus. “With the financial collapse you see a return to some of the attention given to these issues [of globalization]. There is definitely a tremendous amount of public outrage around the world about…neoliberal capitalism’s failure to support working people.”

That outrage was on display in the streets of Pittsburgh, where thousands of youth who cut their teeth protesting the Iraq War joined thousands more veteran activists in challenging the G-20 on issues ranging from trade to the environment.

Whether the larger coalition of groups protesting neoliberalism–which by 2002 had rejected the term anti-globalization in favor of “global justice”–will succeed in fully leveraging this momentum depends on the extent to which it has heeded the calls to evolve following 9/11.

Among the more persistent criticisms has been the movement’s emphasis on polemics over positing constructive alternatives to prevailing global policy. “There were so many negative things happening, we didn’t really have time to think about how the movement was unfolding,” Dobbin says. “In trying to enlighten people to what was wrong, we ended up telling them over and over how bad things were instead of telling people how it could be better.”

Eight years after he called for a movement-wide “reassessment,” Dobbin says the global justice movement has begun to articulate its vision and build the foundations necessary for realizing it. The World Social Forum (WSF) is an example of this, he says.

Held annually since 2001 in Porto Alegre, Brazil, the WSF was conceived as the antithesis of the World Economic Forum, which is held the same time each year in Davos, Switzerland. For one week each January, WSF brings together a diverse group of individuals and global justice organizations to debate policy and build solidarity.

The forum has emerged as the first global platform for discussing strategies of resistance to neoliberal globalization. More importantly, it has served as a model for similar gatherings like the U.S. Social Forum, which held its inaugural meeting in Atlanta in 2007.

Engler points to groups like the Stiglitz Commission, Global Unions and Global Trade Watch, which put forth viable, alternative models of global economic cooperation at the international level. “There is a very detailed set of demands; the problem is not that the ideas are not there, the problem is that [global leaders] don’t want to listen,” he says.

Then there’s the question of destructive behavior, which a majority of global justice activists say draws media attention away from more constructive voices. Though the “Black Bloc” remains a visible part of the global justice movement, in general there has been a shift away from indiscriminate violence and property damage. During Pittsburgh’s G-20 protests, a handful of young people took it upon themselves to destroy property–mostly breaking windows at corporate-owned businesses–and their actions were mostly condemned by other protesters.

By the end of the summit, Pittsburgh Police were blaming most of the property damage–a relatively paltry $50,000 worth–on a single protester from California, 21-year old David Japenga.

Gautney says the move away from destructive protest shouldn’t come as a surprise. “There are so many great projects these kids are working on–building squat communities and giving homes to illegal immigrants, organic farming, Food Not Bombs’ programs, feeding Katrina victims,” she says. “They are not just fighting in the streets.”

The global justice movement’s strength lies in its diversity and the fact that as a constantly evolving organism, it has the flexibility to adapt to changing circumstances and issues.

“You can’t talk about a protest movement as a single thing because there are actually lots of different constituencies involved in this both globally and locally,” Engler says. “That’s why it’s called a ‘movement of movements.’ “