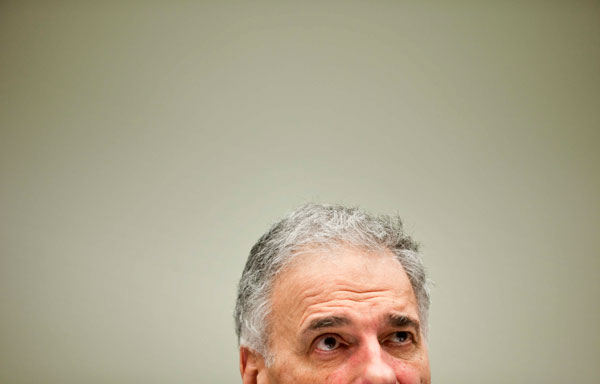 Ralph Nader speaks during a House committee hearing on Capitol Hill May 21, 2009, in Washington, DC. Nader and others appeared before the committee to testify about the effect of auto industry bankruptcies on the United States. (Photo by Brendan Smialowski/Getty Images)

Can the Rich Really Save Us?

Nader wonders what would happen if society's wealthiest were 'not just interested in charity, but real change.'

BOSTON–After hearing Ralph Nader discuss his new book, Only the Super-Rich Can Save Us, at an event here Friday night, a man expressed the concern many Nader supporters felt upon reading the book’s title.

Only the rich? A book about billionaires giving their time and money to charity? From “America’s first citizen”? Has Ralph Nader lost his faith in grassroots organizing and activism?

Not at all, the perennial third-party presidential candidate replied.

Only the Super-Rich Can Save Usis a utopian fantasy, not an ideological surrender. Its characters are real-life people (usually billionaires) like Warren Buffett, Bill Cosby, George Soros, Yoko Ono and Ted Turner, who are powerful enough to enact large-scale social change.

Nader imagines them acting on behalf of the American people, and wonders what would happen if society’s wealthiest were “not just interested in charity, but real change.”

It is, in essence, Nader’s dream. A dream where the “super-rich” realize they want more than multi-million dollar mansions and private yachts. Or well-endowed foundations memorializing their deaths. “Nothing fails like success,” Nader suggests. His billionaires want more, they want the deeply human satisfaction of civic responsibility. “They want to look their grandchildren in the eye proudly,” he writes.

And so Nader has written his first novel. “If I wrote it as nonfiction,” he quipped Friday, “nobody would believe me.” But he is quick to dispel the notion that his book harbors the secrets the progressive movement has been searching for. “There are no magic wands here,” he cautioned. “In fact, most of the rich are amateurs at social change.”

Instead, over more than 700 pages, the book outlines a blueprint for a progressive movement that is not only top-down, but also bottom-up. Money, argues Nader, is needed to put into effect all the good strategies and ideas that progressives have built. “There’s a difference between being concerned, and being serious,” counsels the always-serious Nader.

But expecting the rich to go against their own interests? That will never happen, challenged skeptics at the public forum in Boston’s Jamaica Plain neighborhood.

Except, as Nader pointed out, it already has. Wealthy Bostonians largely financed the abolitionists of the nineteenth century, including John Brown, “until the very end.” Likewise, decades later, the grassroots activism of the civil rights movement received financial support from America’s wealthy class. Nader suggests there’s no reason it can’t happen again. “If we stereotype the super-rich 100 percent,” he said, “we’re missing out on some who are as enlightened as we think we are.”

This process of aligning the wealthy with the grassroots causes they support is how Nader came to speak at the event. It was organized in part by an organization called Wealth For The Common Good, which works with “wealthy individuals…to promote shared prosperity and fair taxation.”

So there is realistic grounding for Nader’s fantastic visionary novel. And that’s as good a place to start as any.

If it is effective, Only the Super-Rich’s brilliance will lie in providing an image of a more just society, rather than in documenting the unjust system progressives are already exposing.

“We are living in the golden age of the documentary,” Nader notes, listing the political and corporate corruptions that have been so diligently exposed in print and on film, and the lack of societal change that they have resulted in. Today’s exposé studies, he suggested, have little chance of achieving the purposeful impact that a book like Rachel Carson’s Silent Spring did a generation ago.

For inspiration in writing Only the Super-Rich, Nader turned to the classic utopian novels of the past, like Edward Bellamy’s Looking Backward, and Thomas Moore’s aptly titled Utopia. He sees his newest offering as part of this important legacy.

Nader seems less concerned with where the money comes from, and more concerned with a vision of what to do if such funds were available. As anyone involved with social change knows, the only thing more difficult than raising money is deciding how to best use it.

Not surprisingly, Nader has a few suggestions.

Toward the end of the evening, long after receiving a standing ovation, Nader looked out over the packed congregation, full of activists who–like Nader–have experienced the frustration of organizing a great political campaign only to fall short of the ultimate goal. He implored attendees to push the limits of what they believe is possible, asking: “Is there anything in this book that can’t be real?”

He expressed that question as succinctly as possible while inscribing my copy of his book. He wrote, simply: “Imagine.”