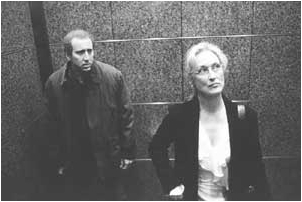 The Subject Was Orchids

BY Joshua Rothkopf
Share TweetReddit0 EmailPrint
Let a great adenoidal whine spread out across the land: A new comic hero for the neurotic has arrived, and his name is Charlie Kaufman. Kaufman is, in fact, a real person, a Hollywood screenwriter of no small renown. His first produced script, Being John Malkovich, inspired equal parts awe and concern; there was the obvious kinship with dementia, with monkeys and with that other famous Kaufman from outer space. But with Adaptation, he really pours himself onto the page, turning a serious case of writer’s block into a rather public form of therapy. From womblike blackness, we hear the panicky first words of his main character, and we already know his name: “Do I have an original thought in my head?” Welcome to meta.

This might be just what the doctor ordered, but not Kaufman’s producers, who were by all accounts expecting a faithful version of Susan Orlean’s elegant nonfiction, The Orchid Thief, an inexplicably hot property for an abstract rumination on flowers. (How Kaufman landed the tony assignment in the first place is a mystery worthy of a prequel.) While I haven’t read the book, for once I’m sure it really doesn’t matter. Does Orlean include scenes of her ravishment by a balding, fortyish screenwriter? Thought not. “Whittle it down,” she coos, straddling him, and it’s clear Adaptation has little to do with fidelity to the text, strict or otherwise.

Or does it? Much of the payoff of Kaufman’s gamble, once you get past the initial shock, comes with its savvy suggestion that the loneliness of a Hollywood schlub might have more in common with Orlean’s imperious detachment than one would initially think. He’s picked up on something longing and unrequited in Orlean’s relationship with her gregarious subject, John Laroche, an obsessive clipper of rare orchid species. Wading into swamplands behind him, she seems to have coveted his passion. Kaufman seizes on this with the desperation of a drowning man; part of the fun of this creative hijacking comes from his sexing up of Orlean’s hoity-toity New Yorker universe.

But I get ahead of myself. First there’s the schlub. Great beads of flopsweat form on his jowly face, and you wince with the realization that it’s Nicolas Cage. With any luck, this manic actor will go on to promised greatness; his career has slipped of late into mawkishness. But for now, Charlie is his most brilliant comic creation to date—quite an achievement if your credits include Raising Arizona. Charlie types in a tortured hunch, his desk an inverted bridge chair with a dented cliplight hanging off it; we cut to Orlean’s palatial study, all harmonious horizontals broken only by her erect posture (Meryl Streep rebounds here as well), and an odd couple is born.

Adaptation isn’t all pillow talk, though those are its best parts. It does get around to The Orchid Thief, interrupting its fidgety flow for droll sequences of bees copulating with like-striped petals and an absurd moment with Charles Darwin who, in Kaufman’s imagining, writes by candlelight with a skull on his desk. (He’s some kind of evolutionary Hamlet.) A John Laroche materializes (Chris Cooper), casually charming and driven, but something of a footnote in his own story. Maybe it’s because he’s the one character who has this adaptation thing figured out, flicking from one super-advanced hobby to the next—orchids, turtles, mirror collecting—with the blink of an eye. In a way, he’s the most boring. Bring on the writers.

There’s no good reason why this should work—the picture is a schizzy, self-indulgent mess—but magically, it does. It’s too early to tell what kind of director Spike Jonze is; his only other work is Malkovich and before that, some marvelous music videos, one of which featured Christopher Walken’s best performance in years. But I’m already willing to credit him with a veteran’s restraint: Jonze knows not to trick up Kaufman’s lunacy with camera shenanigans. He goes instead for that wobbly faux-realism, of which I’m generally not a fan. Jonze makes it work though, and his contribution is key: Kaufman’s ideas risk preciousness without such a counterweight. (I shudder to imagine them working apart.)

Everything ends up in the swamp, with a murderous Orlean and Laroche chasing Charlie down with a shotgun. He’s got company though: his twin brother Donald (Cage again, effortlessly), whose baser aspirations for a script sale (“My genre is thriller,” he chirps. “What’s yours?”) send the third act spiraling into delirious cliché. Adaptation owes a lot to Donald, too much to spoil, and I’ve saved him for last because he’s Kaufman’s sweetest invention—a goofy angel who ends up solving the movie. He also gets Kaufman’s best line, a bruised retort to Charlie’s savaging of his idiotic serial-killer script: “Mom called it ‘psychologically taut.’ ” No Kaufman would ever suffer such banal praise in reality, and for that we should be eternally grateful.