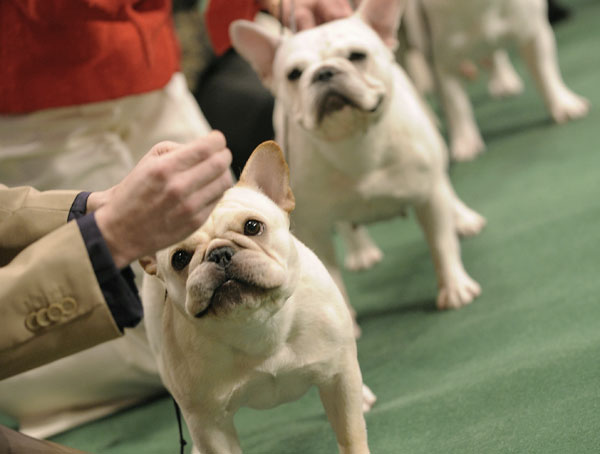 French bull dogs—who generally mate through artificial insemination and give birth through Caesarean section—strike a pose for the judges at the 2009 Westminster Kennel Club dog show in New York. (Photo by Timothy A. Clark/AFP/Getty Images)

The pursuit of purebred perfection threatens some of our best friends.

Patti Strand, a Dalmatian breeder and board member of the American Kennel Club, opposes regulation. ‘We live in a free society,’ says Strand. ‘America is a lot different from Europe.’

American pedigreed dogs, products of a large, established industry, aren’t cheap. As pets, they can cost more than $1,000–and that’s before vet fees. Safe Harbor Lab Rescue estimates that there are more than 20 million purebred dogs in the United States. “By pure breeding, breeders can maintain and enhance certain traits,” says Patti Strand, a longtime Dalmatian breeder who sits on the board of the American Kennel Club (AKC). Unfortunately, a buyer can usually predict what will kill their pet as well.

Thanks to unregulated inbreeding, many dog breeds suffer chronic diseases and conditions. For example, golden retrievers die of cancer about 60 percent of the time, according to the Golden Retriever Club of America. Show-style German Shepherds are notorious for their slumping, easily disjointed hips, and pugs’ wheezing is the result of a severe facial deformity.

Such ills should not be surprising: In some breeds, dogs have a 75 percent inbreeding coefficient (the indication of how related they are), according to Susan Thorpe-Vargas, a breeder of Samoyeds who holds a Ph.D. in genetics. (A brother and sister have a coefficient of 25 percent.) The late John Armstrong, a veterinarian with the Canine Diversity Project, reported that certain unusually inbred lines of poodles have an inbreeding coefficient of 70 percent.

According to data from the University of Pennsylvania school of veterinary medicine, which published a study of one heavily inbred group of inbred beagles, three-fourths of puppies with a 67 percent or higher coefficient will die within 10 days. The dogs who survive are often saddled with genetic disease, poor immune systems and shortened life expectancies. “It’s killing them. They’ll eventually hit a genetic cul-de-sac and be too inbred to reproduce,” says Thorpe-Vargas, author of Genetics and Breeding Strategies: Essays for the Dog Breeder.

In Europe, several countries have made efforts to reform breeding and competitive showing. German breeders must have all matings approved by a breed warden, which discourages inbreeding of unsafe pairs. In Britain, the outcry following the 2008 BBC documentary Pedigree Dogs Exposed prompted the Kennel Club, the UK’s largest dog registry and governing body, to regulate health screening and breeding. “It doesn’t have to be like this,” documentary filmmaker Jemima Harrison wrote in an e-mail to In These Times. “We really can have beautiful pedigree dogs that are not struck down by diseases or encumbered by physical handicaps forced on them by us.”

When looks can kill

The AKC is the largest pedigree dog registry in the United States. Besides regulating litter and dog registration, it sets the “standard” for each breed, a specific set of requirements for height, weight and build. These standards force breeders to assume the role of geneticist, trying to control for desirable cosmetic traits and weed out those deemed unfavorable by the AKC.

Some of the most iconic canine features, such as a bull dog’s big head and squat body, are the result of selective breeding over many generations. However, adherence to these standards is often detrimental to dogs. Many English bull dogs, for example, are unable to mate without assistance, so breeders must resort to costly artificial insemination. And because these dogs are bred for their large heads, a Caesarean section is required 90 percent of the time, according to several bull dog breeding sites.

In These Times spoke to three veterinarians who disputed the notion that inbreeding is a primary, or even partial, cause of purebred dogs’ serious health problems. Robert Hutchison, an Ohio-based veterinarian whose work includes artificially inseminating show dogs, acknowledges that breeders do tend toward different physical traits (a large head, short snout, etc.) depending on the most winning dogs of the moment. But he contends that, although breeding for certain traits doesn’t always turn out best for the animals, breeders self-correct if they see problems.

Some breeds, however, are clearly hurt by AKC standards. Pugs suffer from respiratory problems because of their pushed-in faces that extend the soft palate into the throat, blocking air. The AKC standard mandates that the “muzzle is short, blunt, square, but not upfaced…A pug’s bite should be very slightly undershot.” (The Pug Dog Club of America did not respond to interview requests.) Because pugs cannot breathe well, they can’t easily exercise and as a result many are obese. Not surprisingly, the Orthopedic Foundation for Animals ranked pugs as the second-worst breed in terms of hip dysplasia, with about 64 percent of the dogs affected. Bull dogs rank first, with more than 73 percent affected.

Genetic testing can remedy some problems, but not all. Many fatal diseases, such as the bleeding disorder Von Willebrand’s that occurs in doberman pinschers, carry a specific genetic marker. If a dog is a carrier of the gene, it can be spayed or neutered to resist the spread of the condition.

Yet the AKC allows sick dogs to register, breed and win. Thorpe-Vargas advocates that registries such as the AKC rewrite policy to outlaw unhealthy dogs from registration. This would bar breeders from knowingly passing on devastating diseases and would greatly pare down the number of affected dogs.

However, AKC spokeswoman Lisa Peterson says that her organization “is not a health registry.” Asked about breeder practices she responds: “You sound like you’ve been watching that BBC documentary.”

To register a dog with the AKC, a breeder must prove pure pedigree lineage and pay a $20 fee. For a litter, the fee is $35 plus $2 per puppy. If a dog with a documented genetic disease contributes to a litter, its pups are welcomed, even though they may be carriers. Stud dogs can be bred as many times as their owner wants, even though this reduces the gene pool of a breed even further. Foreign dogs, even those who are “pedigreed” or from the breed’s country of origin, are often rejected by the AKC as viable mates, which further limits genetic diversity.

The idea of AKC-mandated health screening “is smart,” says Chicago veterinarian Lisa Cieply, “but I think you’d have a tough time making it a requirement.” However, the AKC and many breeders vehemently defend the lack of regulation, saying that most breeders are responsible. Strand, the Dalmatian breeder who sits on the board of the AKC, opposes legislative regulation in particular, saying that self-regulation by breeders is sufficient. “We live in a free society,” she says. “America is a lot different from Europe.”

Steve Parsons, a doberman pinscher breeder based in Utah, is one of the few willing to speak out. “The AKC is a business organization, and if they start to impose more rules, they’ll have less revenue,” Parsons says. “There really are truly responsible people who take care of their dogs, but there are a lot of people who don’t because it will interfere with their revenue stream.”

Clubs dedicated to each AKC-recognized breed (there are more than 150) do try to counter these problems, and many mandate that their members test parents before mating. However, Thorpe-Vargas says that while some clubs are interested in protecting their breeds, they have yet to prohibit inbreeding.

Peterson says that these clubs, along with canine health registries, ensure that breeders do not create a dog with a congenital defect or problem.

Breed clubs wield a great deal of influence with regard to AKC standards. If a club pushes for a change of breed standard or testing requirements, the AKC may respond.

But Parsons says his fellow doberman breeders refuse to respect his anti-inbreeding position, and that many clubs will not accept someone who is outspoken. After Pedigree Dogs Exposed was broadcast, one British breeder was fired from her position in a breed club for less-than-sunny comments.

Proponents of the status quo are quick to point out that reputable breeders who belong to clubs are enthusiastic about testing and improving the breed, so there is no need for regulation. But until there is an overhaul of breeding standards in the AKC and purebred dog community, many breeds will continue to be plagued by disease. Thorpe-Vargas puts it this way: “They say to me, ‘I’ve been doing this for 30 years.’ They don’t know and don’t want to know the harm they’re doing.”

Corrections: The original version of this story implied that John Armstrong is still alive. He is not. It also implied that the inbred poodles Armstrong studied, which had an inbreeding co-efficient of 70 percent, are common. In fact Armstrong chose to study those poodles because they were extremely and unusually inbred. The story has also been amended to clarify that the University of Pennsylvania school of veterinary medicine study focused on one particularly inbred group of beagles.

Editor’s Note: A few minor factual corrections/clarifications have been made to the story, but In These Times stands by Sara Peck’s story. Here is Peck’s response to the broader criticisms of her story offered by readers in the comments below.

Sara Peck’s response: I realized the issue of inbreeding would upset some members of the purebred dog community, and am glad a healthy discussion about the story has taken place below. My article was not written “with a click of a mouse,” as one commenter dismissively wrote. And no, I did not manipulate information to suit an anti-dog breeding agenda. I grew up with purebred dogs and loved all of them, which is why I wanted to write about this issue.

It is possible to have beautiful purebed dogs without genetic deformities or health problems. But it is undeniable that certain breeds are saddled with certain illnesses. What I advocate is a restructuring of the breeding system to better serve the best interests of dogs—not the standards of the AKC or dog breed clubs, or the profits of the breeding industry.

Dogs are wonderful companions, and yes, the various breeding communities are dedicated to funding research to help their prized canines. However, the current system rewards those who make decisions genetically detrimental to the dogs in question. I hope my article starts a debate about how we can breed healthier dogs, and ensures that future generations of kids will be able to grow up with healthy animal friends.

Sara Peck, a spring 2010 In These Times editorial intern, is a Northwestern University student studying journalism and political science.