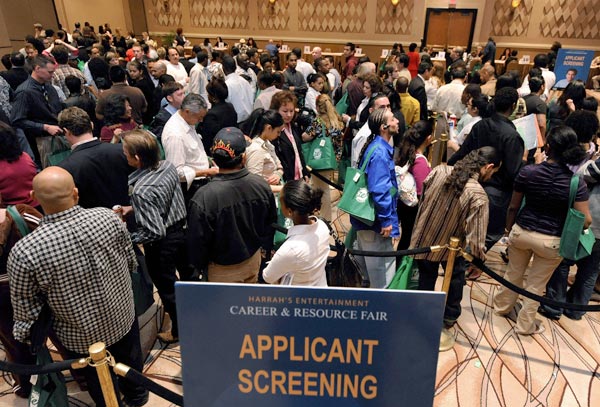 Prospective workers line up at the Rio Hotel & Casino during a job fair for Harrah’s Entertainment, Inc. on April 14, 2010, in Las Vegas, Nev. (Photo by: Ethan Miller/Getty Images)

On the Road to a Jobless Recovery

The Obama administration and conservative Democrats in Congress—spooked by Republican hysteria about deficits and ‘big government’—are failing to address the job crisis.

On a cool spring day, a small group of organizers and unemployed workers from Jobs With Justice gathered–fittingly–in the Debs Room of the elegant, if fading, garment workers’ union hall to hatch plans to form the Chicago Council of the Unemployed.

“We’ve been in a crisis for over a year,” said Lorraine Mora-Chavez, laid off in early 2009 from her job as a researcher and an advisor to Latino students at DePaul University. Now worried that her extended unemployment benefits might end, and facing likely foreclosure on a house she can’t sell, Mora-Chavez asked with plaintive anger, “Where’s the fight back?”

Despite union lobbying for federal aid for the jobless and efforts to organize unemployed workers, like the Machinists’ online “U-Cubed” (Ur Union of the Unemployed) project, there has been little organized political action by or for the jobless. But unions could–and largely do not–organize their own unemployed former members as a protest force. Both community organizations and the AFL-CIO’s community affiliate, Working America (with nearly 3 million members) could also do more to target the unemployed in their organizing. More pressure from the unemployed could counterbalance the right-wing attack on big government and deficit spending.

Unemployment in the United States currently hovers at 10 percent, and more than 17 percent if involuntary part-time and discouraged job-seekers are included. And according to most forecasts, it is likely to remain above pre-crisis levels for at least three years. In good times, the economy might generate 400,000 new jobs each month. Today, the United States needs about 15 million jobs to make up for recession losses, population growth and labor force drop-outs.

It may soon need more. Hundreds of thousands of teachers, and city and state workers could be out of a job as a result of budget crunches. The Euro zone crisis could spread to the United States, and a weaker Euro will hurt U.S. exports. The 2009 stimulus money will be largely spent by later this year, eliminating a source of jobs.

Despite record numbers of people being out of work for six months or more, the Obama administration and conservative Democrats in Congress–spooked by Republican hysteria about deficits and “big government”–are failing to address this crisis.

By early June, Congress had only approved a temporary renewal of extended unemployment benefits, leaving the long-term jobless with no support. Aid to states, school systems and local governments that could have saved a couple hundred thousand jobs fell victim to the misguided, cynical deficit phobia.

“We are going to need a dynamite recovery to get us back to five-percent unemployment,” says Andrew Stettner, deputy director of the National Employment Law Project, an independent policy group. “We may never get there.”

According to a May NBC/Wall Street Journal poll, voters rank job creation and economic growth over concern about the deficit and government spending 35 percent to 20 percent. And in the midterm congressional elections, Democrats could do better than pundits expect if they run a jobs-oriented campaign, as union-backed Democrat Mark Critz did in his May special election victory in a largely white, working-class district of Pennsylvania that voted for John McCain in 2008.

But Democrats so far have little new to offer voters this year on job creation. And NBC pollsters report that 42 percent of Americans do not believe that the February 2009 stimulus package will help the economy. Yet, limited as it was, it worked: The nonpartisan Congressional Budget Office estimated the American Recovery and Reinvestment Act increased the number of full-time-equivalent jobs in the first quarter by 1.8 to 4.1 million. Many voters, however, confuse the Recovery Act with the much-loathed bank bailout.

Unemployment in the current downturn reflects two failures of the economy–one long-term, one (with luck) short-term.

Over the past several decades, labor market inequality and insecurity have grown dramatically, as workers have failed to share in the nation’s growing productivity. There was no net job growth or, for most workers, increased real earnings, in the first decade of this century.

The trends in population groups that were either working or looking for work have also shifted. Starting in the 1990s, then accelerating in the next decade, men began withdrawing from the labor force. In the 2000s, after decades of increases, the percentage of women who participated in the workfore also declined. On the other hand, growing numbers of workers over 55 have taken part in the job market, probably out of increased retirement insecurity.

Unlike the quick rebounds from downturns typical after World War II, the recessions of the early 1990s and 2001 were followed by two to three years of “jobless recovery.” The economy simply was not growing fast enough to generate sufficient employment (partly due to poor public policies).

There were also more permanent dismissals and fewer temporary layoffs. Employers were more likely to cut their workforces deeply, even close or offshore operations, rather than hold on to experienced workers. In the last recession, contrary to old patterns, productivity increased rapidly as companies tapped into benefits of computerization or business re-organization.

Those trends, which are bad for workers, have intensified in the current recession, with the burden falling on African-American, Latino and young workers. The unemployment rate for these groups has soared, even as they withdraw from the workforce and are not officially counted as unemployed. Men have lost jobs more than women, reflecting the fates of sectors where they are concentrated (manufacturing and construction versus healthcare and education).

Long-term unemployment has hit a post-Depression high. This past spring, 45 percent of the unemployed were out of work six months or more and 25 percent for more than a year. Unlike some long-term jobless, such as ex-offenders or displaced workers who need re-training, most of today’s long-term unemployed are victims of weak growth and economic demand. Longer periods of unemployment are also more common because the workforce is more educated (taking time to find jobs that fit their skills); less mobile (exacerbated by the housing crisis); and older (workers over 55 are less likely to be unemployed than younger workers but out longer if they lose their jobs).

The costs of our inability to make job creation a national priority are huge, both economically and socially. The whole economy suffers from a loss of potential output and the waste of unused talents. Governments lose revenue and gain new expenses. Workers seeking a job or students entering the job market in a recession compared to a boom will lose on average one-fifth or more of their earnings for many years. Children of workers who lose their jobs fall behind in school and eventually earn less over their lifetimes. The longer workers are unemployed, the greater their risk of physical and mental illness, suicide, homicide, imprisonment and mortality from various illnesses.

The case for action

“The economic case for doing more is overwhelming,” says Economic Policy Institute (EPI) economist Heidi Shierholz. A recent EPI report demonstrates that job-creation policies pay for a large part of their costs by spurring growth and tax revenue–and that does not take into account the value of avoiding social and personal traumas.

More needs to be done to directly aid the unemployed. Only 67 percent of those currently unemployed get benefits. According to the Organization for Economic Cooperation and Development, the United States lags behind most of the 28 other rich countries in the group, replacing on average 28 percent of lost income (temporarily up to 99 weeks for some workers), compared to the leader Norway, replacing 72 percent of income for five years.

As a complementary alternative, the federal government could give tax credits to employers who reduce working hours with no (or little) reduction in pay, thus sharing the work, maintaining engagement, preserving income and encouraging new hiring, as Center for Economic and Policy Research Co-Director Dean Baker advocates. Work-sharing has largely kept unemployment from rising in many European countries (and reduced it in Germany), despite steep drops in GDP.

Starting construction projects is often slow, but job recovery will take a long time. Beyond simply repairing the nation’s decaying infrastructure, new infrastructure projects in progressive jobs plans like Pollin’s would help redirect the economy, especially on energy efficiency and sustainable alternatives. Such a recovery plan could be a first step for federal and local governments to implement other policies to solve the longer-term labor market problems of wage stagnation and inequality–such as sustained high levels of public investment, an industrial policy, a new trade policy and a vigorous labor-rights strategy

“There’s no shortage of creative ideas for increasing employment,” CEPR economist John Schmitt says. “The only shortage we have is the political will to use appropriate job-creation policies.”