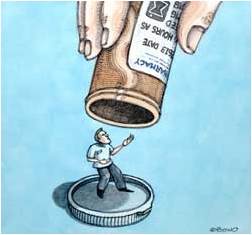 The profits in patents

BY Dean Baker
Share TweetReddit0 EmailPrint
President Bush and Congress have been anxious to pass a Medicare prescription drug benefit in response to the pain inflicted by rising drug costs. The typical senior household now spends nearly 10 percent of its after-tax income on prescription drugs. For poorer families, or those with serious medical problems, the costs are far greater, in many cases absorbing a lifetime of savings in a matter of months. Furthermore, with drug costs rising at the rate of 10 percent a year, the problem is rapidly getting worse with time.

Given these facts, it is not surprising that there is considerable pressure on politicians to include a prescription drug benefit within Medicare that will help defray some of these costs. This is the reason both houses of Congress recently approved Medicare drug bills. These bills are projected to cost approximately $400 billion over the next 10 years.

It has often been pointed out that these bills are grossly inadequate. In 2006, when the bills would first take effect, the average senior would be paying more for prescription drugs even with the benefit, than they were paying without a Medicare drug benefit in 2000, when Bush first promised it in his campaign. By 2013, the last year of the budget planning horizon, even with the benefit in place, seniors would be paying nearly twice as much for their prescription drugs as they did in 2000.

The response of many to these facts is to argue for a more generous benefit—if the government is prepared to spend more money, then the savings to seniors will be greater. However, the arithmetic shows that this is not a plausible route either. The projections from the Congressional Budget Office show that prescription drugs will cost seniors nearly $2 trillion over the next decade. There is no plausible scenario in which the government will be picking up enough of this tab to substantially alleviate the burden on seniors.

Fortunately, there is a simple alternative route to providing seniors with affordable drugs—make them cheap. The arithmetic here is quite simple. Drugs are actually quite cheap to produce in most cases. The only reason drugs are expensive is that the government grants companies patent monopolies, which allow them to charge whatever they want, without the threat of competition. In the absence of patent monopolies, drug prices would fall by 70 to 80 percent on average, and in some cases considerably more.

Of course, the drug industry rightly points out that patents give them the money and incentive to research new drugs. This is true, but there is a very simple answer—have the government pay for the research directly instead of by granting patent monopolies.

The arithmetic on this one is also simple. According to the drug industry’s own numbers, consumers pay about $4 in higher drug prices for every dollar of industry funded research. The other $3 go to profits, sales promotion, lobbying, and other expenses. Furthermore, much of the industry’s money is wasted researching copycat drugs—drugs that largely duplicate the function of existing drugs.

In a world with patent protection, such drugs provide an element of competition, but in a world where drugs are sold in a competitive market, there would be little reason for most of this research. The industry estimates that close to 70 percent of its research falls into this copycat category.

The alternative to direct government support for research would actually just extend current practices. The federal government currently spends $25 billion a year financing research through the National Institutes of Health (NIH), nearly as much research as the industry funds. The difference is that NIH finances the basic research and then lets the industry get the patents and the profits.

If the funding for NIH were increased enough to replace the industry’s research—with all patents placed in the public domain, so that drugs could be produced in a competitive market—drug prices would fall 70 to 80 percent. As a side benefit, billions of people in developing nations would have access to low-cost generics. On top of this, the quality of research would almost certainly be improved, as market competition would eliminate the incentive to distort and conceal research findings created by patent monopolies.

Representative Dennis Kucinch, who is running for the Democratic presidential nomination, has proposed the “Free Market Drug Act,” which goes exactly this route. It would cost approximately $250 billion over the next decade, yet it would save seniors far more on prescription drugs than either of the bills approved by Congress. The Free Market Drug Act is a serious way to address the problem of out-of-control drug prices—it remains to be seen if any other politicians are prepared to address this issue in a serious way.