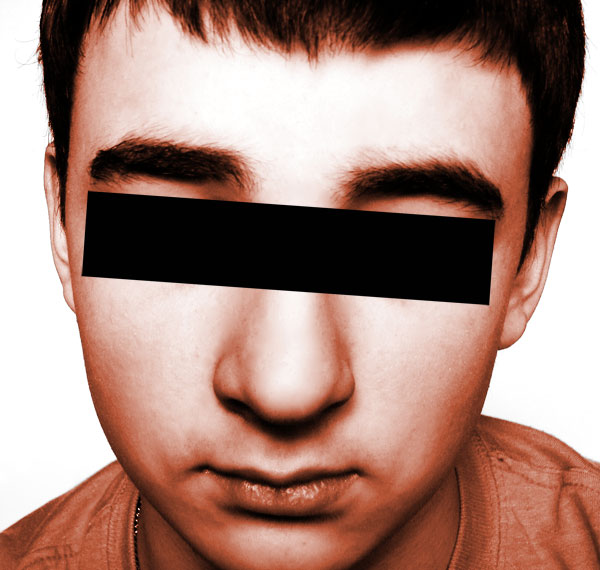 Under federal law, a 14-year-old boy who has sexual relations with a 13-year-old girl could be branded for life.

Barely a Teenager and Marked for Life

Juvenile justice experts argue that therapy is the most effective way to deter future offenses and that lifetime registration harms juveniles’ chances of reintegrating into society.

In 1999, Anthony, a 13-year-old boy who weighed 350 pounds, told his four-year-old cousin to expose herself. Anthony, now 24, swears he did not touch her. Nonetheless, her father pressed charges and Anthony was found delinquent for assault with intent to commit sexual abuse, sentenced to sex offender treatment, and assigned a lifetime spot on Iowa’s public sex offender registry.

Ten years after beginning treatment at Woodward Academy in Woodward, Iowa, Anthony, who asked that his last name not be published, finds it impossible to lead a normal life. Permanently associated with dangerous pedophiles and pathological rapists, his childhood mistake has hindered his ability to find work, housing and societal acceptance. Although he left Woodward when he was 18, Iowa’s residency restriction at that time–which barred sex offenders from living within 2,000 feet of a school–forced him to leave his family’s home in Des Moines for a trailer with no electricity on land owned by his father in rural Osceola, Iowa.

Anthony’s plight could soon become common among all of America’s juvenile sex offenders, who in 2009 were responsible for one-third of all sex offenses against minors in the United States. Following the 2006 passage of the Sex Offender Registration and Notification Act (SORNA), the federal government instructed all U.S. states and Indian territories to adopt a new sex offender registry system that includes juvenile offenders. But at the July 2009 deadline, not one state had complied.

Iowa has long required juvenile sex offenders to register their crimes online. And it is moving closer to the federally mandated system–in 2009 Iowa updated its laws to look more like SORNA. As other states consider compliance–the Justice Department has set a new July 2011 deadline–the impact of Iowa’s already strict registry system offers a window into what adulthood might look like for juvenile offenders around the country.

The new federal legislation organizes sex offenders into three tiers, categorized by the severity of their crime. The tier to which a defendant is assigned determines the punishment and duration of registration. The highest, tier III, covers the most heinous offenses. Anyone 14 or older who has sexually offended against a child 13 or younger is put in tier III, and required to register for life.

Critics of the juvenile registry system believe that tier III requirements are unnecessarily harsh when applied to all juveniles. Only 10 percent of young offenders will re-offend, according to the Center for Sex Offender Management. Yet young offenders who commit crimes against even younger peers are stuck in the most serious category.

Juvenile justice experts argue that therapy, not registration, is the most effective way to deter future offenses and that lifetime registration harms juveniles’ chances of reintegrating into society. All juveniles judged delinquent (the equivalent of being convicted in juvenial court) for sex crimes in Iowa are required to undergo treatment. Woodward Academy, the largest of three sex offender treatment facilities in the state, receives kids from all over the country.

“These kids are young enough that we can teach them right from wrong,” says Tonna Lawrenson, the academy’s program director. Woodward’s long-term sex offender treatment program treats juveniles whose offenses range from what experts call “Romeo and Juliet”-style statutory rapes (where the sex is consensual, but because of the participants’ ages, illegal) to flashing, fondling and forcing younger children to expose themselves.

As is the case with many teen offenders, Anthony’s act against his cousin was not random, but stemmed from his own childhood abuse. When he was nine, a 16-year-old boy sodomized him and threatened to kill his mother if anyone found out.

Children act out sexually for a variety of other reasons. Anthony Rodriguez, therapist and founder of The Men’s Center in Davenport, Iowa, is one of four sex addiction experts in the state and has worked extensively with sexually abusive youth. He says a lack of attachment between parent and child can cause children a great amount of anxiety–an anxiety that is relieved when they do something like look at pornography or touch someone inappropriately.

Lawrenson also sees many young offenders exhibit behavior she says is not natural, but learned. “I’ve never believed that a child is born to be a sex offender,” she says.

Stephen Draminski agrees. “They become what we call ‘sexually reactive,’” says Draminski, who leads a sex offender treatment group at the Robert Young Center in Rock Island, Ill. “They act out sexually in different ways, replaying their abuse over and over again.” He says poor social skills combined with sexual curiosity can also prompt an offense.

Draminski’s group therapy focuses heavily on empathy, teaches kids to manage destructive emotions, and promotes healthy relationships and sexual behavior. At Woodward, intensive one-on-one therapy allows kids to discuss things that might embarrass them in front of peers. In one of these individual sessions, Anthony finally revealed his own abuse to Lawrenson, years after it happened.

‘Big enough to commit the crime’?

Those opposed to lifetime juvenile registration suggest that it does not prevent future offenses, since sexual abuse is most often committed not by strangers but by someone in, or close to, the family. “Registration gives people a false sense of security, a false sense of hope,” says Randy Smith, who reviewed adult and juvenile sex offenders for courts in Chicago and Ohio.

But despite the efforts of advocates, the futures of young offenders like Anthony are in the hands of elected officials unlikely to oppose a law that claims to protect children from sexual abuse. Smith says, “A lot of sex offender laws come from the six o’clock news, from the random person who buries the kids in the woods.”

Iowa State Senator Jerry Behn, who authored the state’s original residency restriction in 2002, admits the law overreached when it applied to all sex offenders, rather than only dangerous pedophiles. But, Behn says, “anyone who votes to fix this now is going to be viewed as light on sexual predators.”

Erin Lovejoy, a detective who tracks sex offenders for the Des Moines Police Department, admits registration is more effective at quelling public fears than preventing offenses. “It’s not going to prevent an act from occurring by any means. Nothing will do that unless they’re locked up,” she says.

Anthony spent one year in prison after moving into his mother’s Des Moines home in 2007 to care for her as she died. This was a violation of Iowa’s harsh residency restrictions since she lived within 2,000 feet of a school. The 2,000-foot restriction was amended in 2009, but Iowa still prohibits registered sex offenders from working at or visiting places frequented by children, such as schools, public pools, libraries and fairs.

Iowa Associate Juvenile Judge Constance Cohen believes employment and residency restrictions should factor in successful treatment and behavioral change. She says, “If you paint with such a broad brush, it will eliminate opportunities for these kids.”

The new 2009 Iowa law also limits the power juvenile court judges once had to waive registration, thus bringing the state closer to compliance with SORNA. Cohen says this will force more juveniles to register whether or not they are at risk to re-offend. Behn, however, opposes judicial discretion. “If a person is big enough to commit the crime,” he says, “they’re big enough to pay for it.”

Those who work closest with juvenile offenders maintain that the negative effects of lifetime registration are well-documented. But it is politicians like Behn who set the rules for juvenile sex offenders. This means Anthony, who at 13–like so many others–was “big enough to commit the crime,” will spend the rest of his life paying for it.

Caitlin Dickson, an In These Times editorial intern, graduated in May from the University of Iowa.