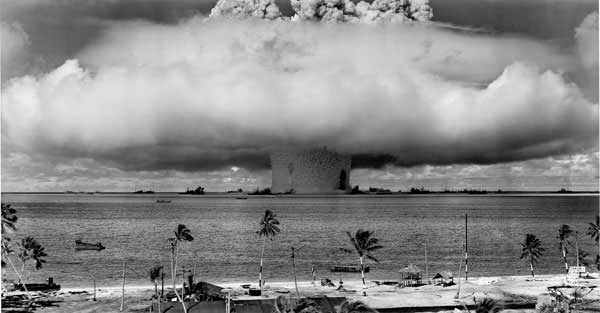 The “Baker” explosion, part of Operation Crossroads, a nuclear weapon test by the United States military at Bikini Atoll, Micronesia, on July 25, 1946.

The world’s most atomic atoll is recognized by the UN.

In dubious honor of its unique role in 20th century history, on August 1 UNESCO declared the Bikini Atoll Nuclear Test Site a “World Heritage” site. Both beautiful and historically significant, the atoll – part of the Marshall Islands archipelago in the North Pacific Ocean – was named a heritage cultural site “for the role that tests of atomic weapons at Bikini played in shaping global culture in the second half of the 20th Century.”

It was the first time the UN’s Education, Scientific and Cultural Organization has so honored the Marshall Islands. But Bikini’s new title is likely small comfort for Marshall islanders affected by the testing, including the small surviving Bikinian community, which voluntarily left its home in 1946 after being told by a U.S. military governor that nuclear testing there would contribute to world peace.

The UN declared the Marshall Islands a trust of the United States in 1947, a move “intended to promote the welfare of the native inhabitants and to advance them toward self government.” But even before trusteeship, the United States began to use the Marshall Islands as a proving ground for nuclear weapons. From June 1946 to August 1958, 67 nuclear tests were conducted there.

The most powerful bomb detonated on the islands was the hydrogen bomb “Bravo,” on March 1, 1954. Estimated to produce around four megatons of power, it unexpectedly produced 15 megatons, an impact equivalent to 1,000 Hiroshima bombs. In shifting winds, the fallout from the huge explosion reached the inhabited islands of Rongerik, Rongelap and Utirik, more than 100 miles to the east. Contaminating more than 7,000 square miles of the Pacific Ocean with radiation, fallout from the blast also reached Australia, India and Japan. Ocean currents carried the radioactive fallout northwest, where the crew of the Japanese fishing boat Lucky Dragon Number 5 suffered radioactive poisoning resulting in the death of one fisherman.

But the greatest tragedy struck the heavily radiated northern Marshall Islands. In November 1995, Marshall Islander Lijon Eknilang appeared before the International Court of Justice (ICJ) in The Hague and gave this chilling first-hand account of the effects of nuclear testing in the Pacific: “Women have experienced many reproductive cancers and abnormal births … In privacy, they give birth, not to children as we like to think of them, but to things we could only describe as ‘octopuses,’ ‘apples,’ [and] ‘turtles,’ ” Lijon said, who herself has had seven miscarriages and no live births.

“The most common birth defects … have been ‘jellyfish’ babies. These babies are born with no bones in their bodies and with transparent skin,” she continued. “Many women die from abnormal pregnancies, and those who survive give birth to what looks like purple grapes, which we quickly hide away and bury.”

Lijon pleaded that what she and other islanders have suffered never be repeated. As Alyn Ware noted in SGI Quarterly, the ICJ concluded that nuclear weapons “are unique in their destructive potential, that their impact cannot be contained in time or space, and that there is a universal obligation to abolish such weapons.”

Of course, this has yet to happen. In fact, Bikinians haven’t even been fully compensated for the damage and displacement caused by nuclear testing. The Nuclear Claims Tribunal, a body designated by the governments of the U.S. and Marshall Islands to determine compensation owed, awarded them $563 million in 2001, but as the tribunal points out, funds made available by the United States are “manifestly inadequate.” In 2006, Bikinians sued the U.S. government for most of that money, but in April 2010 the U.S. Supreme Court refused to hear the lawsuit.

While the small number of tourists who now trek to Bikini Atoll may be charmed by its coconut palms and fascinated by the ships that Bravo sank in its lagoons, we must not forget the suffering of Marshall Islanders. It is up to us to see that ongoing nuclear disarmament and abolition efforts ensure that Bikini’s tragic heritage remains unique.

Peter Cohen, an artist, writer and activist, has been working to abolish the bomb for more than 50 years. His website is at nukefreeworld.com.