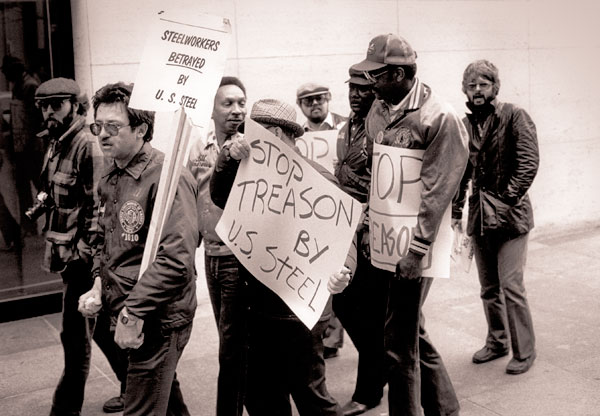 Members of USW Local 1010 on the picket line in East Chicago, Ind., in the early 1980s. (In These Times photo archives)

As Labor Goes, So Goes the Nation

Unions united workers across gender and racial boundaries, and provided a counter-narrative to what their members heard and saw in various media.

This article is part of "Help Wanted," an In These Times feature series examining how American progressives should chart a way forward. The series began with our February 2010 issue, which offered these stories:

"5 Things Progressives Should Do—and Not Do," by Barbara Ehrenreich

"Beyond Barack Obama," by Richard Flacks

It is easy to lament President Barack Obama and the Democratic Party’s compromises over their first two years in power, especially their failure to do as much for unemployed workers and foreclosed homeowners as they did for bankrupted and indebted financiers. Yet there are explanations for why Obama and the Democrats have behaved as they have. To understand them, we must analyze the deeper forces behind the political dynamics of the past 30 years.

What we know of as modern American liberalism, or what is more fashionably characterized today as progressive politics, is largely the result of the rise of organized labor. By the late 1940s and early 1950s, a still-divided labor movement represented the largest single electoral bloc in the nation, and it would remain that through the 1960s. The votes of union members and the lobbying of their representatives in Washington and in state capitals expanded the ranks of workers covered by minimum wage and hours laws, and raised that wage repeatedly. They helped bring millions of previously excluded employees into the Social Security system and improved the system’s benefits for retirees, their survivors and the disabled. However much many white union members and their leaders remained racist and misogynist, labor’s political influence proved decisive during the 1960s in the enactment of civil rights legislation.

Labor exerted such influence because at its peak it represented a third of the non-agricultural labor force. Even after its density began to slip in the late 1950s, absolute membership rose, however erratically, for two more decades. Almost all unions (other than the white male bastions that were the building and construction trades) acted as a place where working people who otherwise lived in separate neighborhoods, worshipped in different churches and temples, patronized different taverns, and even belonged to ethnically or racially-based local political clubs, met together to discuss work issues, union matters and politics.

Blue Collar Community, William Kornblum’s sociological study of Chicago steel workers in the early 1960s, shows how unionism brought together white, black and brown members. In those sectors of the economy where women entered the labor force in substantial numbers, and especially in the rapidly expanding public employees’ unions, organized labor united women and minorities along with dwindling numbers of white males. Over time, minorities and women rose to leadership positions in public employee and service industry unions.

Not only did unions serve to unite workers across gender and racial boundaries, they also provided a counter-narrative to what their members heard and saw in various media. Progressives suffer today not because they lack attractive narratives but rather because their opponents have grander platforms from which to narrate their political tales. In the United States, money continues to speak (and we all know how five Republican justices on the Supreme Court validated that truism in Citizens United). The more you have of it, the louder you can speak. On talk radio, television news and in most daily newspapers, capital and its conservative admirers speak far louder than labor and progressives.

That–combined with labor’s declining size and influence­–explains why the Democrats behave as they do, and how their behavior is part of a process that has unfolded continuously since the administration of Jimmy Carter. When inflation and deficits raged, Democrats found it as easy as Republicans to blame union power for economic misery and to assure white nonunion workers that their real incomes would rise and tax rates would diminish if union monopolies were curbed (part of the rationale for deregulation of the airlines and trucking). During the Carter years and the Clinton years, Democrats refused to provide unions and their members labor law reform or expansive employment programs. Such policies would worsen inflation and deepen the national debt, according to party economic gurus and senators whose victories derived from suburban voters.

Instead, what the Democrats offered minorities and women (who continued to vote Democratic in greater numbers than white men) were symbolic but insubstantial victories in the form of affirmative action laws and regulations. Look, for example, at the recent lame-duck congressional session. Obama used his influence and power to obtain passage of repeal of Don’t Ask, Don’t Tell, yet when it came to tax cuts for the rich, he and fellow Democrats chose to compromise in perhaps the worst way. Even Obama’s most notable early legislative triumph, “Obamacare,” was sold to equivocating Democrats and moderate Republicans on the basis that it would reduce the federal deficit.

So, how do we change a reality in which fewer than seven percent of private-sector workers belong to unions and in which the majority of union members, who are today public employees, face unremitting attacks on their salaries and benefits?

Union power today remains limited to no more than eight states in which union density and influence remain formidable (California, New York, Illinois, Pennsylvania, Ohio, New Jersey, and in relative terms, if not absolute numbers, Alaska and Hawaii). Yet the recent 2010 census indicates that the population continues to move to and grow in precisely those states with low union density and dominant anti-labor forces. Even in the remaining union bastions, labor and workers are under attack. Look at New Jersey under Gov. Chris Christie; Ohio, Wisconsin (see “What’s the Matter with Wisconsin,” p.24), and Michigan with their newly elected Republican governors and legislatures. Even in New York, new Democratic governor Andrew Cuomo’s first executive action was to freeze wages and salaries for state employees.

How do we convince the majority of white male workers who today vote Republican to change their political preferences?

We won’t do it with better narratives–creating and telling more attractive stories that they are unlikely ever to hear. And we won’t do it by stressing identity issues (no matter how worthy) that cut two or more ways. For example, for every LGBT vote that might be won by repeal of Don’t Ask Don’t Tell or the elimination of bans on same-sex marriage, there is a vote to be lost among older white workers, including union members who identify as devout Roman Catholics, fundamentalist Protestants or conservative Muslims.

We need to devise both a coherent strategy and tactics to change our current political dynamics. I am at a loss, however, as to what that strategy and those tactics would be. Given a first-past-the-gate electoral voting system in which third-party and independent candidates have scant chance to defeat major party candidates, and legislative structures that offer disproportionate political voice to representatives from less populous places, it is nearly impossible to conceive of a popular, left political movement that might replicate the successful founding of the Republican Party 157 years ago. The best we can hope for is that insurgent movements inside the Democratic Party can influence those who hold power as the Populists did between 1892 and 1896 or as labor and the left influenced New Dealers between 1934 and 1937.

It is an ugly fact, but in the short term, our best hope seems to be that the newly installed Republican majorities in the House and in a majority of states will fail even more miserably than the Democrats in reducing unemployment and bettering the material circumstances of working people. That failure might provide a political space for those movements that want to make life more stable and secure for working people.