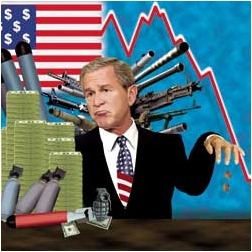 Anyone hoping that President Bush would produce a plan to help the nation’s workers through difficult times was sure to be disappointed by his State of the Union address. Not only did he fail to present any solutions, he doesn’t even seem to realize that we have a problem. He boasted about low inflation at a time when the Federal Reserve Board has expressed concerns that the economy risks deflation. He touted the current low interest rates, which the Fed has quite explicitly maintained because of the extraordinarily weak state of the economy.

It is understandable that the president wouldn’t dwell on bad news in his speech, but it seems only reasonable to acknowledge the obvious. For the first time since the Great Depression, the United States has gone three years without creating any jobs. Since the job loss also has been accompanied by a shortening of workweeks, the total number of hours worked in the economy is back to its November 1998 level. While the current 5.7 percent unemployment rate is not very high by historic standards, the ratio of employed workers to population (which economists recognize as a more meaningful measure of the labor market’s strength) is down more than 2 full percentage points from its 2000 peak. This corresponds to a drop in employment of more than 4 million people. Not surprisingly, the weakness in the labor market also brought an end to the strong wage growth of the late ’90s.

Unfortunately, the outlook for the near future in a Bush administration doesn’t look much brighter. His top priority is more tax cuts for the wealthy. More tax breaks, coupled with more military spending, will divert money from productive uses while providing little stimulus to the economy. The president’s biggest hope is that the current housing bubble can continue to sustain the economy through the election; the damage that will result when it bursts can be dealt with later.