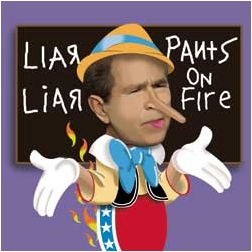 Candidate Bush trumpeted the academic progress of students under a reform regime built on a single standardized test, the Texas Assessment of Academic Skills. Not only were test-scores leaping upward but the “achievement gap” between students of color and their white counterparts was disappearing. This remarkable accomplishment was dubbed the “Texas Miracle,” not merely an important piece of Bush’s electoral strategy, but the phenomenon that catapulted Rod Paige, Houston’s school superintendent, to the Bush cabinet as Secretary of Education.

But like so many of Bush’s claims, the “Texas Miracle” turned out to be both extravagant and false. In June 2003 the Texas Education Agency discovered a pattern of rampant undercounting of dropouts, dramatic overestimations of college-bound graduates and falsified reports concerning crimes in schools. Test scores were inflated, successes wildly exaggerated, failure swept into the broom closet.

This is worth noting now because in his State of the Union message, President Bush vowed to stay the course: “We are regularly testing every child on the fundamentals,” he exulted, highlighting the centerpiece of his signature education law: the No Child Left Behind Act. He deemed his critics timid defenders of the status quo who favor “weakening standards and accountability” and announced that “the days of simply shuffling children along from grade to grade without them learning the basics” are over.

The tragedy is that the Bush policy distracts from a more hopeful path to genuine school improvement. If we are committed to free high-quality public schooling available to all we should campaign for a comprehensive program of change. Equity cannot be the goal. Equity must be the starting point.

We don’t need any more threats or punishments; we need support for teachers, families, students and communities in their efforts to set and meet high standards. With its high-stakes testing, No Child Left Behind functions more as an autopsy than a diagnostic.

Bill Ayers is a Distinguished Professor of Education and Senior University Scholar at the University of Illinois at Chicago. He is the author of Fugitive Days (Beacon) and co-author, with Bernardine Dohrn, of Race Course: Against White Supremacy (Third World Press).