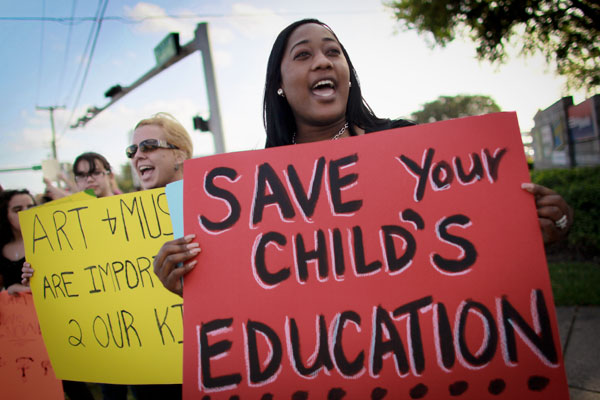 Patricia Fairclough, a reading coach teacher and the 2010 Teacher of the Year, joins a protest against possible cuts in funding for arts programs in schools on March 2, in Miami, Fla. (Photo by Joe Raedle/Getty Images)

Americans should not let such surefire solutions as merit pay go untapped. So, why not start with the members of Congress?

Public school teachers have taken a beating from politicians, opinion-makers, business and foundation leaders and just about everyone else. Lazy teachers, it is said, have wrecked our public education system.

A March 2010 headline in Newsweek put it bluntly: “The problem with education is teachers.” The authors asserted, “In no other profession are workers so insulated from accountability.” Apparently the authors missed eight years of official impunity during George W. Bush’s tenure, and the corporate-driven economic and environmental disasters for which no one has been held to account. But, we digress.

The assault on teachers usually takes the form of grim news reports about failing schools, films such as Waiting for Superman and legislation designed to “root out” bad teachers like noxious weeds. Illinois legislators recently considered a bill that would have barred teachers from ever teaching in the state if they performed poorly on three annual evaluations in 10 years.

One of the most popular remedies for our ailing schools is “merit pay,” an idea championed by business, civic and political leaders, including President Barack Obama. It is the notion that teacher compensation should be tied to performance in order to “incentivize” excellence and attract quality people to the teaching profession.

An unshakable faith in market principles makes education reformers certain of both their diagnosis (teachers are the problem) and their remedy (merit pay). The Chicago Sun-Times described merit pay as an attempt to “push teachers into the 21st Century.”

Americans should not let such surefire solutions as merit pay go untapped. So, why not start with the members of Congress?

Few will disagree that Congress should be held to a higher standard of accountability. Merit pay will incentivize responsible decision-making. How would merit pay work for U.S. senators and representatives?

First, to prevent bias, a nonpartisan commission of experts–sociologists, social workers, healthcare and labor experts–will be empanelled and charged with establishing criteria for evaluating performance. Every two years, the Commission to Incentivize Congressional Excellence (CICE) will evaluate lawmakers based on the Quality of Life Index (QLI) for their districts (or states, in the case of senators).

Members of Congress whose districts perform below average will be subject to instant recall elections back home. If they win, upon return they will forfeit the annual cost-of-living allowance (COLA) and taxpayer funded health insurance. If they lose the recall election, they will be barred from ever running for another federal office.

Congress members who receive an average score in the QLI will see no change in their compensation package, while those who score above average will receive a 10 percent bonus, in addition to the COLA.

Time is of the essence. A bipartisan team of sponsors should immediately introduce the “Congressional Performance Inducement and Leadership by Example Act” of 2011 (COPILEA), mandating merit pay for Congress.

Understandably, some lawmakers will complain that social and economic ills such as poverty, racism and crime have deeper roots than their tenure in Congress–that they should not be held responsible for what are in essence structural problems.

Teachers, of course, will hope such objections by our eminent leaders bring overdue understanding to their own plight. They too have little control over socio-economic conditions that shape the learning environment. They anticipate this newfound appreciation of “social context” by lawmakers will elicit empathy and help change the tone of our education discourse.

Lawmakers who derive power from seniority–and lobbyists who count on their clout–will protest the volatility this bill injects into congressional tenure. They will argue, with some justification, that Congress is already held accountable through elections. But, the power of merit pay, and its popularity among lawmakers should trump such considerations. Lawmakers eager to set an example for the country will no doubt welcome additional standards of accountability that strengthen our democracy.