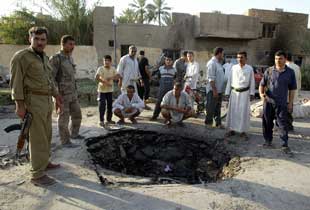 Iraqi National Guardsmen and civilians check a crater left by a suicide car bomb that exploded, killing at least nine people and wounding 37 others.

With no end in sight, the price for Iraq continues to skyrocket

When U.S. proconsul Paul Bremer left Baghdad with what one of his own assistants called “his tail between his legs,” he left behind a still-occupied country and a government completely reliant economically, militarily and politically on U.S. backing. The American taxpayers’ tab for this quagmire is steadily mounting, as are the many other human, environmental and other costs of this war to Iraq, the United States and the world.

Bremer’s fake handover of sovereignty really meant a transfer of control from Pentagon authority to a growing State Department-CIA collaboration to run the country after June 28. There’s no end in sight to U.S. occupation.

We are paying far too high a price for failure in Iraq. And 15 months on, too few Americans have any real sense of the costs of this war. Many Americans and many more people around the world already know that the Bush administration’s central claims for launching this war were lies. Iraq didn’t possess weapons of mass destruction, there were no mobile weapons labs and, despite a few insignificant contacts, Iraq lacked meaningful ties to al Qaeda. Still, a general lack of awareness regarding the price the world is paying for the war has squelched informed debate.

While most Americans are generally aware that the death toll for U.S. soldiers already has climbed past 870, most do not know that the number of Iraqi civilians killed is more than 10 times that number.

The enormous financial burden faced by so many U.S. military families gets scant attention, and few U.S. taxpayers realize how the billions spent on the war are expanding the already huge budget deficit.

There are statistics that clearly document the many costs to the United States, Iraq and the world for a war that has failed to make us safer or bring democracy to Iraq.

Here are some of the numbers from a comprehensive new study by the Institute for Policy Studies and Foreign Policy In Focus titled Paying the Price: The Mounting Costs of the Iraq War:

The bill to U.S. taxpayers so far is $126.1 billion, plus $25 billion more authorized for the rest of 2004. Economist Doug Henwood estimates that three more years of occupying Iraq at $50 billion a year will cost every U.S. household an average of $3,415. That figure doesn’t include the increase in the federal budget deficit and payments on the debt that will plague the next generation for decades to come.

If the U.S. hadn’t gone to war, here are some of the things we could have paid for with that same $151 billion, according to the National Priorities Project:

If we do the same substitutions on an international scale, the calamity of this war is even more breathtaking. If, instead of going to war in Iraq, the U.S. had spent the same $151 billion on international assistance, we could have paid for:

Such a spending policy would likely have laid the groundwork for making the whole world a safer place. Instead, the United States, and the rest of the world, have become less, not more, secure. Once the State Department’s “mistake” in calculating last year’s Patterns of Global Terrorism report was outed, Secretary of State Colin Powell finally admitted that there were more “significant” incidents of international terrorism in 2003 than any other time in the history of these records.

Around the globe, anti-American sentiment has skyrocketed. Destabilization resulting from the invasion created a terrorist haven in Iraq that didn’t previously exist. According to the influential International Institute of Strategic Studies in London, the primary impact of the Iraq war on al Qaeda has been “accelerated recruitment.”

The U.S. military is so overstretched that there is talk of reviving the draft. Reserve troops and National Guard are being called up in enormous numbers (364,000 are now deployed around the globe, including about one-third of the Iraq occupation force) and spending long tours in Iraq that often last 20 months at a time. The U.S. Army plans to recall to active duty as many as 5,600 veterans who are not even members of the Reserve to help fill gaps in Iraq and Afghanistan, according to news reports.

The war has left Americans less secure at home, too. According to a recent survey by the U.S. Conference of Mayors, fewer than one quarter of surveyed cities have received any of the promised Homeland Security funds designed to assist state and local “first responders”—police, firefighters and emergency medical personnel, many of whom also are among the reservists now posted to Iraq. Military families at home face hardships associated with the loss of a breadwinner, including bankruptcy, hunger, unemployment and poor housing conditions. Not surprisingly, a U.S. Army poll showed more than half of U.S. soldiers in Iraq had low morale. And a reported 50 percent said they would not reenlist.

We should listen to the people of Iraq, in whose name the Bush administration launched this war. In May 2004 polls conducted by U.S. occupation authorities, 55 percent of Iraqis say they would feel safer if all U.S. occupation troops left their country.

Phyllis Bennis is a fellow of the Institute for Policy Studies. Her books include Understanding ISIS and the New Global War on Terror: A Primer (Interlink, 2015).