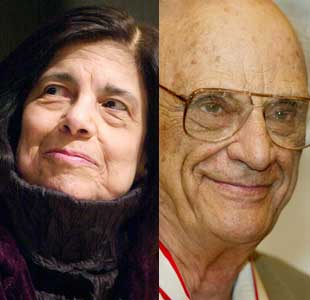 Dr. Marc Leeds, PhD, an English teacher and old friend of mine, albeit 30 years my junior, recently asked me what he might say to his students about the writers Arthur Miller and Susan Sontag, both of whom had died very recently, both friends of mine.

I said that the fact of Miller’s having been widely and deeply mourned as a great person dated back to a time, before television, when a legitimate theater might still suddenly become a church with a rapt congregation, in which one heard and saw a great sermon preached. Miller created two such sermons, Death of a Salesman and The Crucible. Tennessee Williams did it at least twice, with the The Glass Menagerie and A Streetcar Named Desire. Eugene O’Neill did it at least twice with The Iceman Cometh and Long Day’s Journey Into NIght. Thornton Wilder did it at least once with Our Town. Oscar Wilde did it at least once with the funniest sermon ever preached, which is The Importance of Being Earnest.

I said Susan Sontag’s principal gifts to our civilization were not that easily packaged, but were a brilliant, non-stop commentary on contemporary art practices and their effects on our emotions. She did get off one sound bite in an interview on television, which was to me a stunning sermon in and of itself. She was asked what she had learned from the Holocaust, and she said that 10 percent of any population is cruel, no matter what, and that 10 percent is merciful, no matter what, and that the remaining 80 percent could be moved in either direction.

Miller and Sontag, in addition, were seemingly born with stage presence, were birthright personages. When either of them entered a crowded room, all heads would turn in their direction.