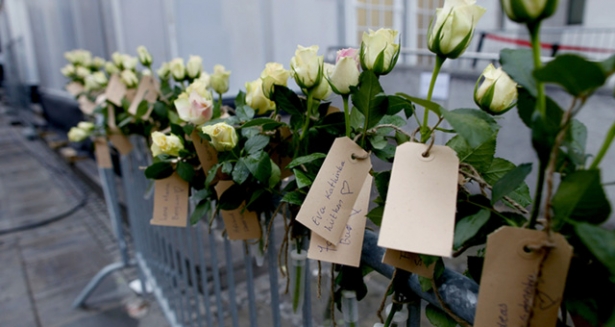 White roses bearing the names of victims are left outside the courthouse in Oslo, on April 20, 2012. (Kyrre Lien/AFP/Getty Images)

Norwegian terrorist Anders Behring Breivik—the self-styled crusader who murdered 77 people last summer—finished five days of testimony earlier this week. Unrepentant, the confessed killer claimed that his actions were “necessary” in order to save European civilization from “cultural Marxists." The trial, set to run 10 weeks, began on April 16. With no question as to his guilt, the court’s primary task is to decide whether or not Breivik is criminally insane, a label he vehemently rejects.

Breivik offered his testimony calmly, ticking off the gruesome details of his shooting rampage on Utøya, the island where he massacred 67 children and young adults attending the Labour party's annual youth retreat. "I do not recognize the Norwegian courts. You have received your mandate from political parties [that] support multiculturalism,” Breivik said at the beginning of proceedings. He admitted to all the acts detailed in the public prosecutors’ chilling indictment but pleaded not guilty, claiming that he had acted in “self defense.”

His testimony betrayed a muddled brand of radical politics: A vague conspiracy—variously defined as “political correctness,” “multiculturalism” and “Islamification”—poses a civilizational threat to Europe, imported by (primarily Muslim) immigrants and fostered by leftist apologists.

The truly frightening aspect of Breivik’s theories, however, is that they hold broad appeal among the resurgent nationalist Right in Europe. Groups such as the English Defense League and political parties such as France's National Front espouse the same principles, singling out Islam as a threat to European identity.

In fact, Breivik’s paranoia is highly unoriginal. Shortly before carrying out the attacks last summer, he released a sprawling, heavily plagiarized manifesto that borrows from popular far-Right commentators. He quotes extensively from the xenophobic musings of Robert Spencer, who writes for Jihad Watch—a blog run by the David Horowitz Foundation that occasionally features the work of Pamela Geller, editor of the anti-Islamic blog Atlas Shrugs.

Breivik also claims to have studied al-Qaeda vigorously, gleaning tactics from the terrorist network in order to ignite a nationalist movement in Europe. During his testimony, he spoke of Islamic extremism’s influence on his own actions:

I think the big problem for militant nationalists in Europe is that there have been very few role models since WWII. If a sofa general is to borrow tradition from al-Qaeda and doesn't dare to do it himself but asks others to do it … he wouldn't have any credibility. That's how role models are created, by sacrificing oneself.

Just as al-Qaeda perceives civilians as legitimate military targets, Breivik sees certain political and religious groups in his own society as existential enemies on an imaginary battlefield.  On his last day of testimony, Breivik apologized to the family of a pub owner killed in the bomb attack he unleashed in the government district of Oslo, stating that his intention was not to kill “civilians.” His classification of the pub owner stands in stark contrast with the youth killed on Utøya: “They were not innocent, non-political children,” Breivik said in his testimony, “these were young people who worked to actively uphold multicultural values.”

Ironically, he would go on to compare the island retreat to a gathering of Hitler youth, a group that represents the complete antithesis of multiculturalism.

These concepts depend on a reductionist perception of how society—and politics—function. It is therefore no surprise that Breivik claims to have practiced for the carnage by playing Call of Duty and other violent video games. In a video game, actors possess clear-cut allegiances with concrete objectives. Atomized and antisocial in real life, Breivik projected this kind of simplistic reality onto the world through the theories of far-Right polemicists.

The end result was brutal, tragic and heart-breaking.