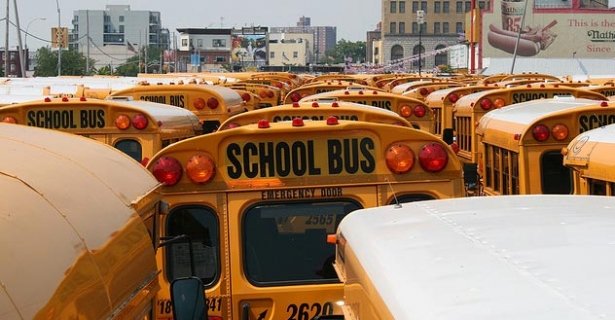 Many of the bus drivers and aides with Amalgamated Transit Union (ATU) Local 1181 undergo extensive training to work with the city's roughly 50,000 special-needs children who ride the bus. Proposed budget cuts, they say, will bring in too many less experienced drivers who just can't provide the same quality of care.

To cut costs, Bloomberg struck down the city's Employee Protection Provisions, a long-established system of maintaining job security for bus drivers and aides. Under the EPP, in place for more than 30 years, displaced drivers could transfer to other companies and receive pay and benefits according to industry seniority. Instead, Bloomberg wants to put bus contracts "out to open bid" for the first time.

“This is a very professional and serious job that we get trained for,” said Anita Timmes, a matron who’s accompanied children on and off the buses for 23 years. Timmes, who had been on the picket line since dawn, pointed out that many children use wheelchairs or are attached to medical devices such as respirators; they require more than just supervision. “I don’t think any driver can come off the street and do what we do,” she said.