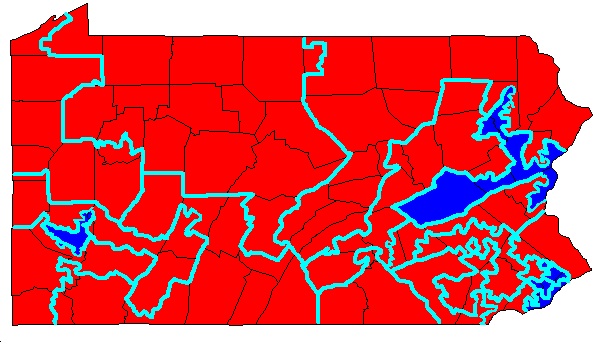 According to a new bill, each of Pennsylvania's 13 "red districts" would be allocated an electoral vote, despite the fact that they each represent a relatively underpopulated area of the state. (Wikimedia Commons)

The cover story of In These Times' latest issue warns of plans in seven Republican-controlled swing states to radically alter how electoral-college votes are awarded, virtually guaranteeing a Republican victory in the 2016 presidential election.

This Monday, as if on cue, seven Pennsylvania Republican state representatives introduced just such a bill. Under the bill, only two of the state's 20 electoral votes would be awarded to the winner of Pennsylvania as a whole, with the remaining votes allocated according to returns in each of the state's 18 congressional districts.

Because 13 of those districts are solidly red, the majority of Pennsylvania's population, clustered in only five Democratic-majority districts, would see a major devaluation in their vote.

Ian Millhiser at Think Progress details the harrowing consequences of such a move:

Pennsylvania is a blue state that voted for the Democratic presidential candidate in every single presidential race for the last two decades, so implementing the GOP election-rigging plan in Pennsylvania would make it much harder for a Democrat to be elected to the White House. Moreover, because of gerrymandering, it is overwhelmingly likely that the Republican candidate will win a majority of Pennsylvania's electoral votes even if the Democrat wins the state by a very comfortable margin. Despite the fact that President Obama won Pennsylvania by more than 5 points last November, Democrats carried only 5 of the state's 18 congressional seats. Accordingly, Obama would have likely won only 7 of the state's 20 electoral votes if the GOP vote rigging plan had been in effect last year.