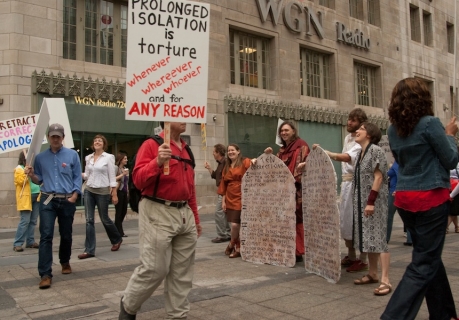 Advocates from Tamms Year Ten rally in Chicago against prolonged solitary confinement. Inmates at Illinois' Menard Correctional Center have been on a hunger strike for more than a month to protest what they call 'inhumane' conditions at the prison. (Justin Goh/ Flickr/Creative Commons)

“The Pit,” as Illinois’ Menard Correctional Center is sometimes known, saw a noisy show of support for some of its prisoners on Thursday night. About 20 people took part in a demonstration outside Menard's walls, banging pots and pans and chanting protest slogans. Some demonstrators said they were able to hear inmates calling out to them from their cells to ask “for due process.”

Inside, officials say, a single prisoner continues to refuse food a month after his hunger strike began. Started by more than a dozen inmates at the Administrative Detention Unit at Menard Correctional Center in southern Illinois, the strikers have taken a stand against what they call "inhumane" conditions in the unit, where prisoners are isolated from the general population and locked in small cells for 23 hours a day, with time out for showers and five hours of recreation a week.

At the beginning of this week, officials reported that many of the strikers who started the protest were being monitored in Menard's medical wing. And for good reason: After 30 days without food, the risks of serious health issues are high. Brian Nelson, Prisoner Rights Coordinator at the Uptown People's Law Center, knows that firsthand. Back in 2000, while in administrative detention in Tamms Correctional Center—the state's super-max prison, which closed in January 2013—he took part in a similar protest that lasted around 30 days. At this stage in a hunger strike, he says, “You're able to read, you're able to write, you're able to think,” but “your body starts eating itself, and you feel it. You know it’s eating itself.”

Corrections officials, however, say they have “incontrovertible proof” that some participants in the hunger strike had been receiving food from other prisoners before they were transferred to the health care unit. “We're not going to release how we know this,” says Tom Shaer, director of communications at the Illinois Department of Corrections, but “their weight loss is not consistent with hunger striking.” Nelson strongly denies that claim.

The strike is just the latest in a series of protests against conditions in solitary confinement taking place throughout the country. In September 2013, inmates in California finally ended a two-month hunger strike they orchestrated to call attention to the cruelty in the state’s largest prison’s Security Housing Unit (SHU); in Indiana’s Westville Correctional Facility, prisoners in the segregation unit celebrated receiving hot weekday lunch for the first time in months in January after their own hunger strike.

Though officials deny that administrative detention constitutes a form of solitary confinement—because prisoners are able to speak with others in neighboring cells—conditions in Menard fit the definition from the United Nation’s Special Rapporteur on torture Juan Méndez, who defines solitary confinement as “any regime where an inmate is held in isolation from others (except guards) for at least 22 hours a day.”

And attorneys and prisoners say being isolated for that length of time can have lasting effects on a person's psyche. After spending more than a decade in a maximum-security administrative detention unit in Illinois, Nelson says his own mother was shocked by how he had changed. When he came home, he says, he “stayed in the basement in a room with no windows” until he could adjust.

Today, he says he still finds it hard to be around large numbers of people, something he attributes to years in administrative detention. “If you spend years not being a person, it becomes very hard to reintegrate back into society,” he says.

At Menard, inmates say those vague qualifications for detention translate into a climate of fear and uncertainty.

“They’re not being given any rules that say why they were put there in the first place,” says Alan Mills, who represents many of the inmates as legal director at UPLC. He says prisoners want to be told why they're being held in the units, and what they have to do to be released.

The decision to send someone to administrative segregation must be approved by the director of the entire prison system and reviewed every three months, Shaer points out. Although the specific evidence surrounding their placement may not be shared with the prisoner, Shaer thinks by the time someone arrives in the units they “have an idea” of why they've been sent there. An inmate is not shown all the evidence, he says, “because that would expose our safety and security systems and our sources of information. Only a fool would do that.”

The Menard strike isn’t the first time the use of administrative detention has been challenged in Illinois. Mills was among the attorneys who took the Department of Corrections to court to challenge the constitutionality of placing prisoners in isolation units at Tamms Correctional Center. In 2010, the District Court for the Southern District of Illinois ruled that inmates in Tamms had not received adequate due process. Judge G. Patrick Murphy found the prison “impose[d] drastic limitations on human contact, so much so as to inflict lasting psychological and emotional harm on inmates confined there for long periods" and that "placement at Tamms [was] of indefinite duration, as Tamms inmates [were] not informed of how long they [could] expect to be confined in the supermax prison or what they [could] do to earn transfer out of the prison.” By then, the Department of Corrections had already come up with a 10-point plan to give every inmate sent to Tamms a hearing in which they could challenge their detention, but the facility was shut down at the beginning of last year before all the reforms could be put in place.

And in fact, Mills says he’s heard similar complaints about the lack of due process from every Illinois prison with similar detention units. According to him, such a system would be unacceptable in the world outside.

“These guys are denied what every one of us gets, even when we get a parking ticket. And of course, the consequences for them are much greater,” he says.

But Shaer thinks this discrepancy is understandable. “Prison isn't the same as the outside world,” he says, because the threats of violence are higher inside prison walls than outside. “If someone doesn't want to be subjected to different rules, then they shouldn't commit crimes and put themselves in different situations,” he adds.

According to officials and activists, administrative detention policies in the state of Illinois had been under review even before the hunger strike began. Laurie Jo Reynolds, an organizer of Tamms Year Ten—a group that campaigned for the shuttering of the Tamms Correctional Center—confirms the Department of Corrections has met with current prisoners' family members and former prisoners over the past year. But while she believes officials are genuine when they say they will continue to reduce the use of administrative detention, she also says the department is like a “huge, heavy tanker" that takes a while to turn around.

The hunger strike, Reynolds argues, is the result of years of ignored grievances coming to a head in the meantime. “What this strike shows is that the sooner you reform a prison, the more problems you avert,” she says. “There was no reason for these men to suffer like this for a point they have been making for years.”

She points out that Tamms Year Ten has been highlighting specific problems at Menard, which she says “is known to have the worst staff culture,” for months. In December, the group wrote to the Department of Corrections, “In spite of many excellent, professional officers, the men from Menard overwhelmingly describe a culture of negativity, racism and disrespect. They complain of ongoing abuse from frontline staff.”

In January, on the strike’s first day, one example of such abuse came to light almost immediately when “an incident of significant physical contact” between a guard and one of the protesters left the prisoner in need of medical attention. According to letters from unnamed prisoners in the same unit, corrections officers took Armando Velasquez and “slammed him face first into the door and yanked his arms up behind his head.”

Shaer confirms that an incident occurred, but he denies reports from other inmates of a beating. “The correctional officer involved in the altercation was locked out of the prison. He's been suspended from his job,” he says. The investigation into the incident is ongoing, and there is a possibility of action being taken against the officer in question by the Randolph County District Attorney, says Shaer. However, he emphasizes that the prisoner involved had received “no broken bones, no blood drawn, no internal bleeding, no bruising.”

Nelson, for his part, says it’s not surprising that inmates—whether at Menard or elsewhere—have resorted to hunger striking to make a point. “That is the only way for prisoners to peacefully protest and make a statement,” he says. “If all the prisoners went and sat out on the yard, they would send a tac team in there gas them and shoot 'em. A hunger strike is a peaceful way of protesting your conditions and making a statement that 'I am a human being.'”