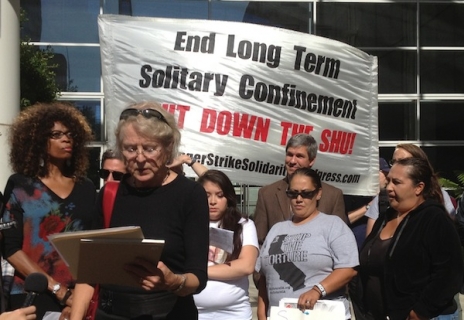 In Oakland, Calif., surrounded by prisoners' families and supporters, Attorney Anne Weills reads a statement from prisoners in long-term solitary confinement announcing the end of their hunger strike. (Photo by George Lavender)

Hunger-striking prisoners in California have announced that they have resumed eating after two months without food. Family members and supporters of the prisoners gathered outside the State Building in downtown Oakland this morning to announce the end of the protest. Their decision comes just days after state legislators agreed to hold public hearings on long-term solitary confinement, the main issue prisoners want to see addressed.

Sixteen hunger strikers in Pelican Bay State Prison issued a statement suspending the strike. In it, they said that the strike had “gained a lot of positive ground towards achieving our goals” but acknowledged there was “still much to be done.” They said that the decision to suspend the strike had been “especially difficult considering that most of our demands have not been met” but they had been urged to accept food by family members, and supporters. “Our resistance will continue to build and grow until we have won our human rights.”

Advocates said that the call for legislative hearings by the chairs of both the Senate and Assembly committees overseeing prison policy had played a key role in the decision to suspend the strike.

“It was really important,” says Barbara Becnel, a member of an outside team of supporters trying to negotiate with corrections officials. “There’s reason to believe that there is change in the making—however, we are not naive enough to believe that that change will come if we go back and do nothing.”

Last week, Assembly Member Tom Ammiano and state Sen. Loni Hancock called for public hearings “about both the immediate conditions of confinement and the use of long term solitary confinement as a prison management strategy.” Hancock expects hearings to take place in the fall. Afterwards, legislators will “put together a packet of legislation based on what we have learned,” she says. Hancock adds that she is “very relieved and grateful” that prisoners have resumed eating.

Officials say the last hundred hunger strikers had resumed eating on Wednesday evening, the 59th day of their protest. “We are pleased this dangerous strike has been called off before any inmates became seriously ill," said Corrections Secretary Jeffrey Beard in a statement. Beard’s department maintains that the hunger strike was organized by prison gangs, a view Assembly Member Ammiano criticized as “simplistic.”

Even though the prisoners have accepted food, Becnel says they still face a “slow death” in solitary without legislative action. While Sen. Hancock says she was “never confident of anything in Sacramento,” she is optimistic that other legislators would support changes. Hunger strikers said they had asked the Caligornia governor’s office to negotiate with them directly, but without success. “There was no response," confirms Hancock, but she added later that she believes Gov. Jerry Brown is “open to many approaches to improving our prison system.”

Ammiano agreed, and insisted the “door was open” to working with Gov. Brown and corrections officials. While the hearings themselves “are not a panacea,” Ammiano says, “they can shed a lot of light on what is happening and why, and how we can improve it.” Similar hearings were held after the first hunger strike in 2011, but Ammiano is hopeful that new hearings will “keep people’s feet to the fire.”

Dana Simas, a spokesperson for the California Department of Corrections and Rehabilitation, said her department would “open its doors” to legislators. “We welcome them to come take a look for themselves at the conditions in our security housing units” which she insists balanced prison security needs with the needs of prisoners.

This was the third hunger strike by California prisoners in two years, and the longest.  Prisoner advocates say that many participants have done irreversible damage to their health. Previous strikes ended after assurances by the Department of Corrections that they would reform a system that sees thousands of people locked up in isolation in Security Housing Units, sometimes for decades.

At today’s rally outside the State Building in Oakland, Melissa Guillen, the daughter of one of the main representatives of the hunger strikers, said the prisoners’ protest had exposed “dirty little secrets” about California’s prison system. Guillen told the crowd that just because the hunger-strike had ended “does not mean the fight to end solitary confinement and the fight for the five core demands to be met is over.”

Along with the hearings in the legislature, prisoners are continuing to pursue a federal-class action lawsuit, challenging the use of long-term solitary confinement. Speaking on behalf of other family members with loved ones inside, she continued, “We will be their voices, we will make sure they are heard, we will continue to put pressure on Governor Brown and the CDCR to make permanent changes in the way inmates are being treated.”