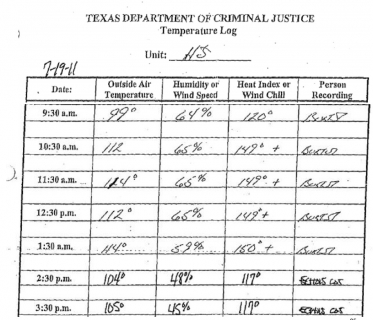 At least 14 prisoners have died from extreme heat in Texas prisons since 2007, according to a report published today. “Deadly Heat in Texas Prisons” by the Human Rights Clinic at the University of Texas School of Law claims high summer temperatures inside Texas Department of Criminal Justice facilities constitute “cruel and unusual punishment” and calls the department's response “woefully inadequate.”

The United States Court of Appeals for the Fifth Circuit has recognized time and again that extreme heat in prisons can constitute a violation of inmates’ Eighth Amendment rights. In a 2012 case, a 63 year old Texas prisoner presented with a preexisting blood pressure condition, and was taking medication that would affect his body’s ability to regulate temperature. The court decided that a reasonable jury could conclude that a failure to provide air conditioning, among other things, to an individual with these conditions was a violation of the prisoner’s constitutional rights.

The National Weather Service (NWS) calls heat “one of the leading weather-related killer[s] in the United States, resulting in hundreds of fatalities each year.” The Human Rights Clinic report points out that prisoners with medical issues are particularly vulnerable to extreme heat, and that average summer temperatures in Texas frequently exceed 90°F.

Texas has one of the highest imprisonment rates and one of the largest inmate populations in the country. The TDCJ’s latest published statistics show that there were 152,303 incarcerated individuals in TDCJ facilities as of August 31, 2012, located in 109 TDCJ units throughout the state. Most of these inmates are exposed to extreme heat. Recent TDCJ temperature logs have recorded heat indices surpassing 100 °F by 8:30 in the morning. Even if the climate remained in this state for the entire day, inmates already would be facing heat indices that the NWS has identified as approaching with extreme caution due to an increased likelihood of heat-related injury. In some instances, records also show that air temperatures outside some TDCJ facilities have spiked above 110 °F by 10:30AM, resulting in a heat index exceeeding 149 °F. These temperatures can remain at that level for several hours; indeed, investigations into heat-related deaths at TDCJ facilities have found temperatures above 90 °F even past midnight. This heat far exceeds any levels of extreme danger identified by the NWS. Continue reading...

An official with the Texas Department of Criminal Justice said that the department would not answer questions because of “pending litigation,” but issued the following statement to The Prison Complex

The well being of staff and offenders is a top priority for the agency and we remain committed to making sure that both are safe during the extreme heat.

TDCJ takes precautions to help reduce heat – related illnesses such as providing water and ice to staff and offenders in work and housing areas, restricting offender activity during the hottest parts of the day, and training staff to identify those with heat related illnesses and refer them to medical staff for treatment.

Although a detailed cost analysis has not been done, retrofitting facilities with air conditioning would be extremely expensive. It should be noted that medical, psychiatric, and geriatric units are air conditioned.

Below are some system wide protocols that units utilize during extreme heat.

*Provide additional water; ice is provided if available in the work and housing areas

*Restrict outside activity (work hours) in accordance with agency policy

*Ensure all staff and offenders working in areas of extreme heat (e.g., field, maintenance, yard squad) are provided frequent water breaks *Transport offenders during the coolest hours of the day

*Load and unload transfer vehicles as quickly as possible

*When utilizing fans, air is drawn through the structure and exhausted outside, taking full advantage of the fresh air exchange system or prevailing winds to assist in the movement of air, as applicable

*Increase airflow by utilizing blowers, when appropriate, normally used to move hot air in the winter; attach ribbons to vents to ensure blowers are being used appropriately

*Allow offenders to wear shorts in dayrooms and recreational areas

*All custody levels are allowed fans.

*TDCJ staff and medical providers work closely together to identify offenders susceptible to heat related issues. A list of identified offenders is provided to housing officers who conduct frequent wellness checks on the offenders.

The agency strives to mitigate the impact of temperature extremes. Again, TDCJ is committed to making sure that offenders and staff are safe during the extreme heat.

In December, a federal judge in Louisiana ruled that temperatures at Angola prison's death row violated prisoners' 8th Amendment Rights. Judge Brian A Jackson ordered the state to come up with a plan to keep temperatures in the cells below 88°F.