The Land Institute Sows a Revolutionary Grass in Kansas 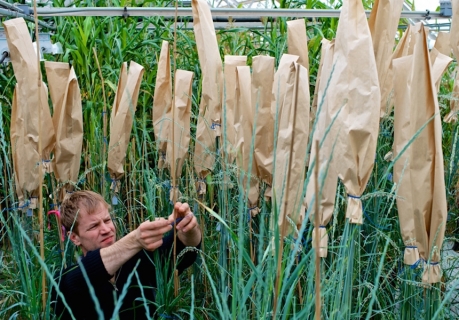 Technician Marty Christians selects heads of wheatgrass for selective breeding. The heads are placed in paper bags to ensure that pollination occurs according to the breeding plan.   The Land Institute

Each growing season, conventional farming methods require that fields are tilled, sprayed, fertilized and reseeded. This practice result in nearly 1.7 billion tons of soil erosion every year. In Salina, Kansas, however, scientists at the Land Institute have developed a strain of wheatgrass that grows year after year without having to be replanted. This grain, dubbed (and trademarked) Kernza by its architects, is a domesticated version of intermediate wheatgrass, a perennial wheat species. It represents a notable step forward in Wes Jackson’s vision for the future of sustainable agriculture.

The Land Institute, a nonprofit research and education organization founded in 1976 by Jackson—a pioneer of the sustainable agriculture movement—seeks to promote an agricultural system that will feed mankind without destroying the soil—its life source—in the process. A Kansas native, Jackson founded and chaired one of the first Environmental studies programs in the country at California State University-Sacramento before moving back home to create the Land Institute.

Currently, the world’s population gets more than half of its calories from annual grain crops. And this is highly problematic for the future of our soil, a resource that, according to Scott Seirer, Managing Director of the Land Institute, “is more valuable than oil by far.” It is also a resource that is disappearing at an alarming rate due to the effects of annual monoculture.

Perennials have deeper roots than annuals, allowing them greater access to water and nutrients, which makes for hardier plants. Extensive root webs also provide structural support for the soil, locking it together to prevent erosion. Most significantly, farmers need not re-seed their field each season for perennials to sprout. Because no tilling is involved, soil nutrient loss is minimized and farmers are not bound to the cyclical use of chemicals to increase soil fertility.

Despite its merits, no perennial grain is currently on the market for farmers. Kernza is the first perennial plant to be developed by the Land Institute, which is planning to release the seed on a national scale within the next 10 years.

Kernza was trademarked in 2011, but the wheatgrass is still being finely-tuned in the Land Institute’s fields to optimize yield, seed size, maturation rate and threshing ability. In 2013, two California firms pledged to purchase this unique grain. Patagonia, a company known for its environmentally conscious outdoor apparel, is developing a line of sustainable food products under the name Patagonia Provisions and Kernza will be an ingredient in some of their goods. Ventura Spirits Co., a small distillery devoted to creating liquors from unusual, naturally derived ingredients, plans to distill Kernza for their Grass Roots Whiskey.

Kernza is currently grown on site at the Land Institute Research Facility in Kansas, as well as on a 90-acre production plot at the University of Minnesota, which collaborates with The Land Institute. The harvests from the Minnesota field will go directly to the two California companies.

Developing a new crop variety is a long and research intensive process. In the Land Institute’s “Fall 2013 Annual Report,” Shuwen Wang, a Land Institute scientist, writes, “In our search for perennial wheat, more than 2,500 individual hybrid plants have been investigated for seed fertility, seed size, perenniality, vigor, disease resistance and other traits, and we are testing some elite breeding lines at 21 locations across eight countries.”

Kernza is in the final stages of development. The Land Institute is working on developing perennial legumes, oil crops like sunflowers, wheat and sorghum. “Our goal,” says Seirer, “is to have different crops in the field at the same time sharing the space like you would find in a prairie, for instance, or any other ecosystem.”

The idea that agriculture should mimic prairie conditions is a central principle that guides the efforts of The Land Institute. Prairie ecosystems foster ecological stability owing to the complex relationships among the living things that thrive in them. The Institute aims to create an agricultural system that provides similar benefits by using combinations of perennial crops.

For example, some plants produce substances that attract beneficial bugs and microorganisms, thereby contributing to the richness of the soil ecosystem. Other plants repel harmful pests. Grouping crops in configurations similar to those found in prairie ecosystems is a sustainable alternative to chemical methods of soil enhancement and pest deterrence.

Unfortunately, the majority of farmers around the globe are not reaping the ecological benefits of what’s known as “perennial polyculture.” Around 70 percent of agricultural land is currently used to produce annual crops, rather than employing the productivity and resilience of more biologically diverse perennial systems.

“Farmers are trapped in the system of annual monoculture,” Seirer says. In fact, so much has historically been invested in this model that it seems beyond reform. Between 2008 and 2012, 5.3 million acres of row crops were planted on highly erodible, previously uncultivated soil.

It’s increasingly clear that annual monoculture is not a sustainable method of land cultivation. Soil is a nonrenewable resource (at least in our lifetime) and we need to be working on ways to preserve it.

As the Land Institute sees it, perennial planting, integrated pest management and no-till fertilization methods—all ecologically stabilizing factors that are naturally present in a prairie ecosystem—are a first step toward a more sustainable future for food production.

Seirer says he is excited at “the possibility of changing something as fundamental as the source of our food, and producing that food with respect for the environment.”

A prairie can sustain itself for thousands of years with no help from humans. It’s that sort of long-term ecological sustainability that Wes Jackson and his team of scientists are trying to pioneer—a sustainability that they hope will pervade global agriculture in the not-so-far-off future.